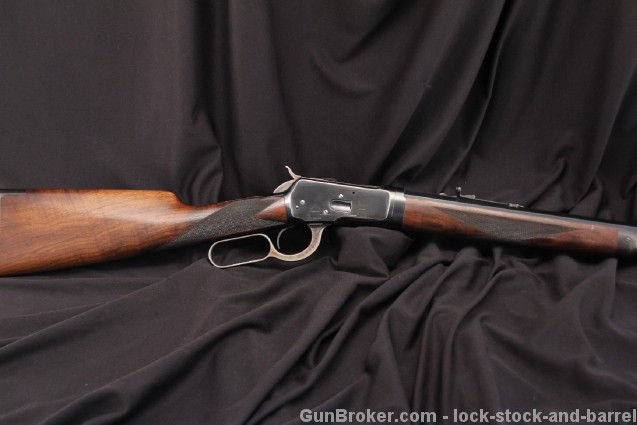 LSB#: 120718JW01
Make: Winchester
Model: Deluxe Takedown Winchester 1892
Year of Manufacture: Early 1920’s. There are no records available for this period, so determining the exact date is impossible and the posted dates of manufacture that can be found online are speculation. Speaking with Dan at the Buffalo Bill Museum confirmed the absence of records on this rifle or this rifle’s range. He said that he has seen other authors estimate dates that have been 5 to 6 years off.
Caliber: .44-40 WCF
Action Type: Lever Action Rifle – Takedown
Markings: The barrel is marked “Manufactured By The Winchester Repeating Arms Co. / New Haven Conn. U.S.A. Patented October 14. 1884”, “Model 92 Winchester / Trade Mark” and “.44 W.C.F.”. The Winchester proof mark is on top of the barrel and the frame. The serial number is found on the underside of the frame. There is a “10”on the underside of the frame, to the left of the lever. The upper tang is marked “Model 92 / Winchester / Trade Mark Reg. U.S. Pat Off.” The left side of the receiver is inscribed “Paul Richards 1921 From BFA”. There is apparently an initial between Paul and Richards that I cannot discern.
Barrel Length: The barrel measures 24 1/4″
Sights / Optics: The gun is mounted with a dovetail set front beaded blade and a semi buckhorn rear leaf sight, set in a dovetail, with the elevator present and marked “”Pat. Feb. 22. 27”.
Stock Configuration & Condition: The stocks are deluxe checkered straight wood. There is a light varnish, though this finish has worn at areas of contact. There is a small chip missing at the upper right wrist. The wood to metal fit is great, even proud at areas. There are no splits or cracks and few scratches or dings. The checkering is surprisingly sharp, but consistent with the remaining condition of this rifle. There is one ding about 2″ back from the cap on the right side of the forearm. The stocks rate in about Fine overall condition.
Type of Finish: Blue
Finish Originality: Factory Original
Bore Condition: The bore is nearly all bright and the rifling is present the entire length. There is some fouling and very scattered light erosion in the bore – nothing severe and the bore is still very good.
Overall Condition: This gun retains about 85% of its metal finish. The edges of the barrel show slight marking and very light thinning. There is thinning on the edges of the frame and light mottling of the finish here as well. There is no pitting or erosion to the surface, and any wear is light and more from age than from use. This is truly a sharp rifle, certainly original – please see the proof marks in the photographs. Case Colors remain on the hammer and lever, with much color and only mild muting. The Screw heads are sharp, showing seldom turning. The markings are crisp. Overall, this gun rates in about Excellent condition.
Mechanics: The action functions as designed and feels very good. We have not test fired this rifle.
Box, Paperwork & Accessories: None
Our Assessment: There is a lot going for this rifle – before you even get to the inscription. The 1892 has become one of, if not the most desirable of the Winchester lever actions. The favorite caliber is .44 WCF, everyone wants the rare takedown and everyone especially wants the deluxe (checkered) wood configuration. If you could ask for the perfect combination of features on a collectible 1892 – this one has them all.

And… The frame has been inscribed, apparently by the factory. Records are not available on this rifle, or even this period of rifles, so determining the exact engraver or recipient will forever be impossible. Our research leads us to believe that Alden G. Ulrich (not John Ulrich) inscribed this rifle at the factory as a presentation. The gun has certainly not been refinished, so the engraving was done at the time of production. Furthermore, our consignor believes that the intended recipient of this rifle was Paul Richards Sr., father of later MLB player Paul Rapier Richards for the Brooklyn dodgers (1932), the Giants, Athletics and Tigers. http://en.wikipedia.org/wiki/Paul_Richards_(baseball) Regardless of the actual recipient, there is no changing the fact that this is at the very least a period presentation of one of the best Winchester Lever Actions you could buy.