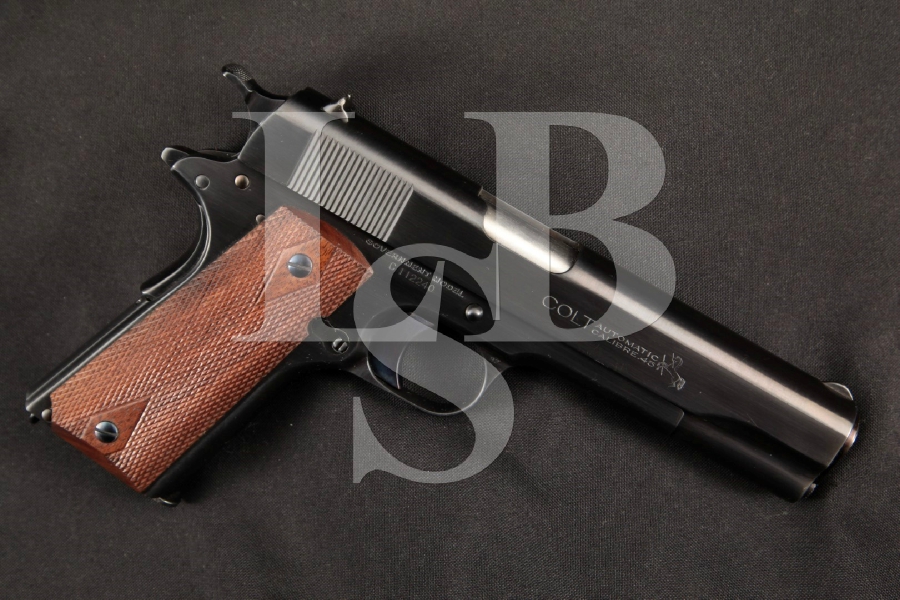 Stock Configuration & Condition: The grips are checkered walnut with smooth diamonds around the grip screws. There are no marks in the smooth areas and the checkering is sharp and without mars. The grips rate in about Excellent condition.

Type of Finish: The finish is blued. The trigger has a fire blued finish.

Finish Originality: The pistol has been professionally refinished.

Bore Condition: The bore is a mottled bright/gray and the rifling is sharp. There is light erosion sprinkled throughout the grooves of the bore.

Overall Condition: This pistol retains about 99% of its current metal finish. There are a few light marks on the left side of the slide, a scratch in the top of the slide, and a light scratch above the rear notch for the slide release. There are a few light marks in the front strap and a few more scattered over the remainder of the frame, with two light dings in the trigger guard. There are three tiny pits under the finish on the right side of the frame above the trigger and a few more on the front underside of the frame. The hammer, magazine release and safety knurling show moderate wear while the slide release knurling is sharp and the recoil spring guide knurling shows light wear. The slide serrations are sharp. The screw heads are sharp and the markings are clear but thin in spots. Overall, this pistol rates in about Fine condition as refinished.

Our Assessment: The 1911 and 1911-A1 pistols served the military of the United States from 1911 to 1985, through two World Wars and the Korean and Vietnam wars. They gained a reputation as a reliable handgun with plenty of stopping power, and are held in high regard by those who have used them. This is a commercial Colt 1911 Government Model pistol made in 1919. The pistol is in about Fine condition with about 99% of its current finish remaining. The bore is a mottled bright/gray, with sharp rifling and light erosion sprinkled throughout the grooves of the bore. Commercial Colt 1911 pistols are always collectable, although less so than those made for the government, and we would expect this one to be no different. It has been professionally refinished, but the lettering is all clear, and you have to look very close to see any marks in the finish. This pistol would be great for home protection or for shooting in the Traditional category at SASS Wild Bunch matches, but we don’t think the shooters will be able to outbid the collectors on this one.