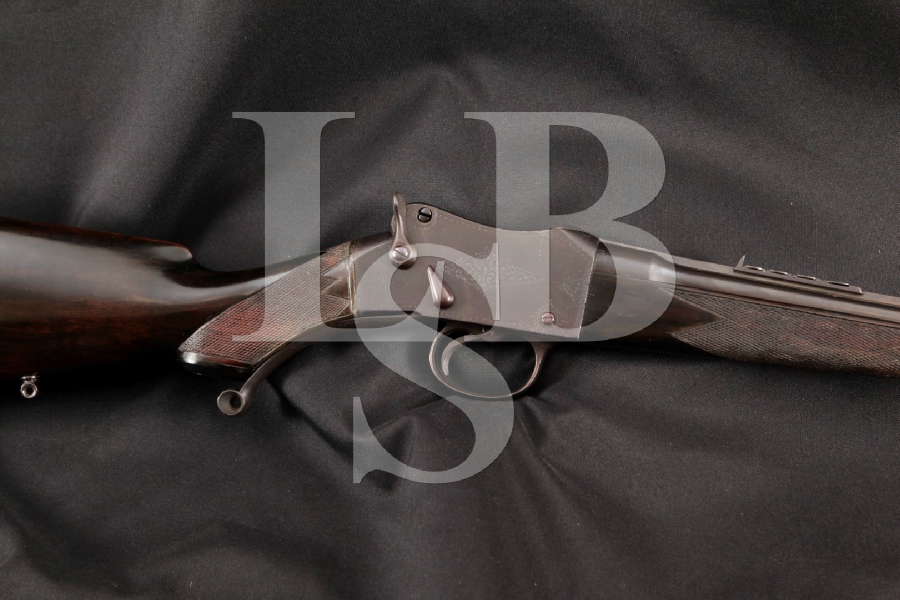 Year of Manufacture: According to our consignor, this rifle was made in 1891 for a British army Colonel in India, we do not have additional documentation to support this. The proof marks are correct for that period.

Caliber: Another note from our consignor is that this rifle was originally in .303 Brit, but was re-bored for .35 Winchester.

Markings: The top of the barrel’s rib is marked “ARMY & NAVY CO-OPERATIVE SOCIETY LIMD LONDON”, the left has two crossed scepter proofs and crown over “BP” which is the Birmingham proof, the right has “V” in circle. The underside of the barrel is marked “P / 2 / ** / 5 / 4 / E.H / Y”. The underside of the receiver has the serial number, the receiver and its components have beautiful scroll engraving.

Sights / Optics: The front sight is a thin blade in a protective ‘eared’ base, dovetailed to the barrel. The rear sight consists of a 100 meter standing “U” notched blade with a rear sight reference, with four other flip-up leafs which are marked “200 / 300 / 400 / 500”, each with a rear reference cut; two no longer have silver filling in the cuts.

Stock Configuration & Condition: The stocks are a set of dark lacquered hardwood. The forend and flanks of the black capped pistol grip have checkering, the forend shows repaired cracks on the left, and scrapes throughout. The butt stock has a sling swivel and small round metal insert, the forward swivel is mounted on the barrel; the butt plate has a storage compartment. The wrist has cracks, both stocks were sanded and re-finished a long time ago. The LOP measures 14 1/2” from the front of the trigger to the back of the blue shotgun-style buttplate. The stocks are in about Fair and Good overall condition.

Bore Condition: The bore is just south of semi-bright, there is extremely light erosion present, the rifling is highly formed with sharp lands.

Overall Condition: This rifle retains about 80+% of its current finish. The receiver has heavy pitting under the current finish, seen also on its lever and block. The metal is shifting to a ruddy red with several scrapes and handling marks. The barrel is still nice and smooth with light underlying pits. The barrel matting was preserved, as were most of the engraved details, please see our pictures. The screw heads are generally strait with light tooling present and the markings are clear. Overall, this rifle rates in about Good overall condition as refinished.

Mechanics: The action functions correctly, with a Martini style falling block, actuated by an under lever, giving the shell a light kick out of the chamber, please have this item inspected before use, it is only marked for black powder cartridges. We have not fired this rifle.

Our Assessment: Unfortunately we do not have any further information on our consignor’s claim that this sporting rifle used to belong to a British army Colonel; the rest of the claims match up, as the rifle is in .35 Winchester and was made in the early to mid 1800’s. It was re-bored at some point, the metal and wood were refinished but it remains a beautiful and intriguing piece. The Army & Navy Co-Operative society began business in 1871 and was composed of, you guessed it, army and navy service members who offered an array of manufacturing skills to the general public. The company enjoyed a vast catalog including rifles such as this one; apparently it was originally chambered for .303 Brit, which was the country’s most beloved small arms cartridge all the way through WWII. We would love to know this rifle’s stories and history, we can see it on safari or hanging above a vet’s fireplace in its day. It will definitely continue to add charm to whatever collection it ends up in, those interested in Martini style rifles should be quite interested in this one. For more information about the Co-Op, visit http://www.housefraserarchive.ac.uk/company/?id=c0512.