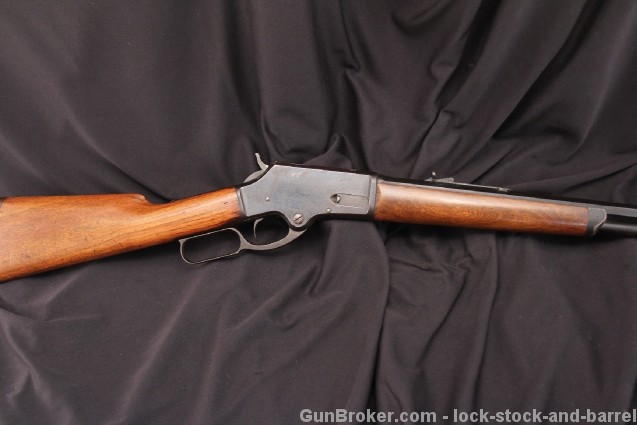 LSB#: 120629OJ01
Make: Marlin
Model: Model 1881
Year of Manufacture: 1888
Caliber: .38-55 WCF
Action Type: Lever Action Rifle
Markings: The barrel is marked “Marlin fire-Arms Co. New Haven Ct. U.S.A. / Pat’d Feb 7 65Jan 7 73 Sept 14 75 Nov 19 7 2678 June 8 79 Dec 3 79 Nov 3 80 Reissue Nov 9 1880” and “38-55”. The serial number is found on the underside of the frame.
Barrel Length: 28″
Sights / Optics: The gun is mounted with a dovetail set front blade and a dovetail set, rear semi buckhorn sight, with the elevator present.
Stock Configuration & Condition: The stocks are original condition, varnished smooth wood. There is age discoloration where the woods meets the metal, with scattered dings marks and scratches throughout. There is a hairline crack at the right rear of the forearm. Otherwise, there are no other splits and cracks. The LOP measures about 13 1/4″. The wood to metal fit is as good as could be hoped for. The stocks rate in about Fine – Excellent overall condition.
Type of Finish: Blue
Finish Originality: Factory Original
Bore Condition: The bore is almost bright and the rifling is sharp and dep. There are only faint scattered spots of erosion, otherwise this bore is exceptional.
Overall Condition: This gun retains about 70% of its metal finish. The majority of the original finish is retained on this fine rifle. There is light frosting on many of the surfaces, with a mottled finish. The nose cap and the muzzle show thinning. There is little wear on this rifle, the majority of imperfection is due to natural age from storage and time – not wear from use. The metal feels a bit rough to the touch, though this is on the surface and not pitting. The Screw heads are sharp, with a bit of wear. The markings are clear, they may be obscured in the pictures, this is primarily the glare. The second line of the patents, at the end, is a bit light. Overall, this gun rates in about Fine condition (Excellent for the age).
Mechanics: The action functions as designed, and feels strong and tight. We have not test fired this rifle.
Box, Paperwork & Accessories: None
Our Assessment: this is one of the best Marlins we have seen, certainly the best 1881 we’ve come across. This is an important rifle, with one even on display at the national firearms museum. Here is what they say:

” John Mahlon Marlin was born on May 6, 1836 near Windsor Locks, Connecticut. At the age of 18, he became an apprentice machinist with the American Machine Works. He later served as a machinist with Colt Patent Firearms of Hartford. In 1863, he started his own pistol manufacturing business in New Haven, concentrating on production of a small single-shot .22 caliber derringer.

Marlin expanded his efforts to include revolver in 1870, after the expiration of Rollin White’s cylinder patents. The Marlin story later became intertwined with the Ballard breech loading rifle. These single-shot arms were invented by Charles H. Ballard of Worcester, Massachusetts, who received his original patent in 1861. Approximately 24,000 sporting and military rifles, carbines, and shotguns were manufactured between 1862 and 1873; Civil War sales account for half of this total. Five different New England companies produced various Ballard designs, with the New York firm of Merwin & Bray acting as sales agents throughout Ballard’s brief history.

Economic depression came to the United States in 1873, and diminishing sales forced Ballard into bankruptcy. All patent rights, equipment, parts inventories, and properties were purchased by New York arms dealers Schoverling and Daly, who handled sales and distribution of Ballard rifles after reaching an agreement with John Marlin to continue production. This partnership would prove to be highly successful for all parties involved.

In 1881, the Marlin Firearms Company was incorporated, and production of Ballard rifles continuing under the Marlin banner until they were eventually discontinued circa 1891 due to the rising popularity of repeating rifles. Marlin-Ballard rifles were and are well-known for their accuracy and workmanship, and fancy-grade long-range rifles are eagerly sought after by modern collectors. Marlin continued to expand his product line, introducing his Model 1881 lever-action tubular magazine repeating rifle in that year. Many key features had been patented by Andrew Burgess and others, but John Marlin incorporated these into a single functional firearm. This rifle was available in a variety of calibers ranging from .32-40 to 45-70 Government, a feature that would not be duplicated by competing Winchesters for several more years.”