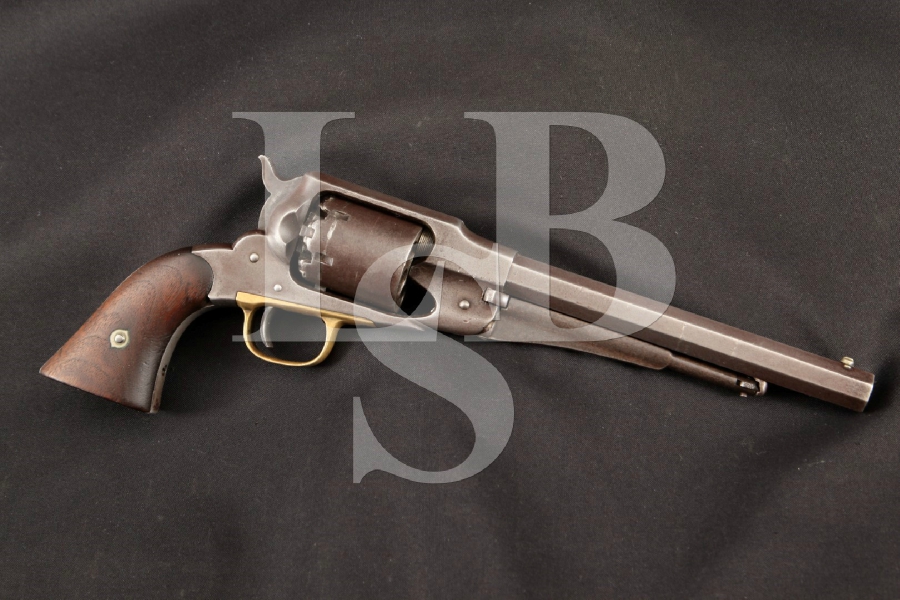 Sights / Optics: The front sight is a ground down low profile blade on a small round German silver base, dovetailed onto the barrel. The rear sight is a “V” cut in the frame’s “U” channel sighting plane.

Stock Configuration & Condition: The grips are smooth walnut with German silver escutcheons. The left panel has a very old repair that has even rubbing to the rest of the surfaces, the tone is lighter than that of the other grip surfaces but the job was done with a highly trained hand, we believe to be of the same period as the pistol. The butt of both panels have several nail head marks, causing a few splinter losses; the left panel has two chip losses in this area. The left panel also shows a faint inspector cartouche, we could not identify the letters, the grips are correct to the pistol. The grips rate in about Very Good Plus overall condition.

Finish Originality: The surfaces are original.

Bore Condition: The bore is mid brown with defined rifling. Most of the surfaces have light erosion, some pits are seen scattered as well, to medium depth.

Overall Condition: The surfaces have a beautiful natural patina, some areas indicate cleaning in different intervals over time. The loading lever, flanks of the trigger and center pin flats have a few spots of blue left, still seen with deep centers. There are tool marks on the barrel, gouges are seen by the center pin, on both flanks of the frame. The grip straps and flanks of the frame have pitting, the metal still meets well. The mainspring is snapped in two pieces, it is a modern replacement, as is the trigger spring, viewed with the trigger guard removed. The cylinder has a heavy drag line and rounding at the rear edges. The screw heads buggered but serviceable. The markings are clear unless otherwise noted. Overall, this handgun rates in about Very Good Plus condition.

Mechanics: The modern replacement mainspring is broken but a skilled metal worker could make a new one. The cylinder still advances properly, giving medium side to side play in full lockup. We do not recommend firing this pistol. We did not fire this handgun. As with all used firearms, a thorough cleaning may be necessary to meet your maintenance standards.

Our Assessment: Only 6,000 Remington Model 1861 Army revolvers were made, with nearly all going to the military during the American Civil War. This one is within a group that was sent to the 2nd Illinois Volunteer Cavalry in about 1862 or 1863. The surfaces have a beautiful natural patina, the metal has several inspector and sub-inspector marks and all surfaces have even wear. Without a doubt, this revolver saw some challenging times, given the early issue date, we can only imagine its journey from the war torn Eastern seaboard to here in Simi Valley in 2017, any collector will appreciate the honest scars this pistol bears.