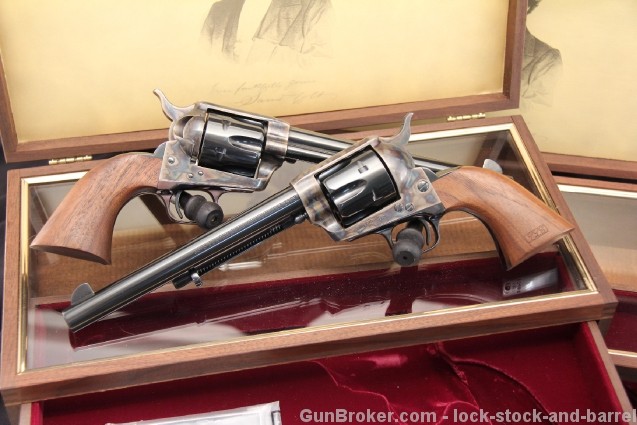 LSB#: 120628MH02 & MH03
Make: Colt
Model: Peacemaker (Single Action Army)
Year of Manufacture: 1973 (On ATF C&R List)
Caliber: .45 Colt
Action Type: Single Action Revolvers
Markings (Both Pistols): The back straps are marked with a “C” and the serial numbers on the butts. The trigger guards are marked with the serial numbers and “C”. The underside of the frames are marked with the serial numbers. the underside of the barrels are marked “P / C / 45”. The cylinders are marked with the serial numbers (less the PC) and “C”. ?The left side of the frames are marked “Pat. Sept. 19. 1871 / Pat. July 2, 1872 / US”. The tops of the barrels are marked “Colt’s PT F.A. MFG Co. Hartford. Ct. U.S.A.”. The left sides of the barrels are marked “1873 Peacemaker Centennial 1973”.
Barrel Length: 7 1/2″
Sights / Optics: The guns are mounted with standard and fixed SAA sights.
Stock Configuration & Condition: The grips are oil finished wood with inspector’s cartouches on the left panels. There are no wear marks whatsoever in these pairs. The grips rate in about excellent and LNIB overall condition.
Type of Finish: Blue / Case Color Hardened
Finish Originality: Factory Original
Bore Condition: The bores are Unfired, except perhaps factory test rounds.
Overall Condition: This gun retains about 100% of their metal finish. Our consignor was the original purchaser of these guns back in 1973 and he states they have never been fired and only bee out of their boxes twice. The only wear mentionable would be age from storage and slight surface rubbing from contact with the box. The Screw heads are unturned. The markings are crisp. Overall, this gun rates in about Excellent and LNIB condition.
Mechanics: The actions are apparently unturned and we don’t want to be the first…
Box, Paperwork & Accessories: These guns come in their original hard wood display cases, with plaques reading “Peacemaker / commemorating the 100th Anniversary of the 45 Cal. Single Action Army Revolver which came to be known as the ‘Peacemaker'”. the keys for both cases and the plastic bags are also included. The boxes are sound and in Very Good overall condition, but there are a few scuffs and dings.
Our Assessment: The Single Action Army, as we know it, began life as the U.S. government service revolver (for trials) of 1872. The gun was soon adopted as the standard military service revolver until 1892. The Colt Single Action Army has been offered in over 30 different calibers and various barrel lengths. Its overall appearance has remained consistent since 1873. Colt has discontinued its production twice, but brought it back due to popular demand. The revolver was popular with ranchers, lawmen, and outlaws alike, but current models are mostly bought by collectors and reenactors. Its design has influenced the production of numerous other models from other companies. Here is a true Colt pair of Peacemaker revolvers, built by the same company that brought us this gun over 100 years ago. Whether a Single Action Collector, Handgun Collector, Colt Collector or Commemorative Collector – this set belongs in your gun room.