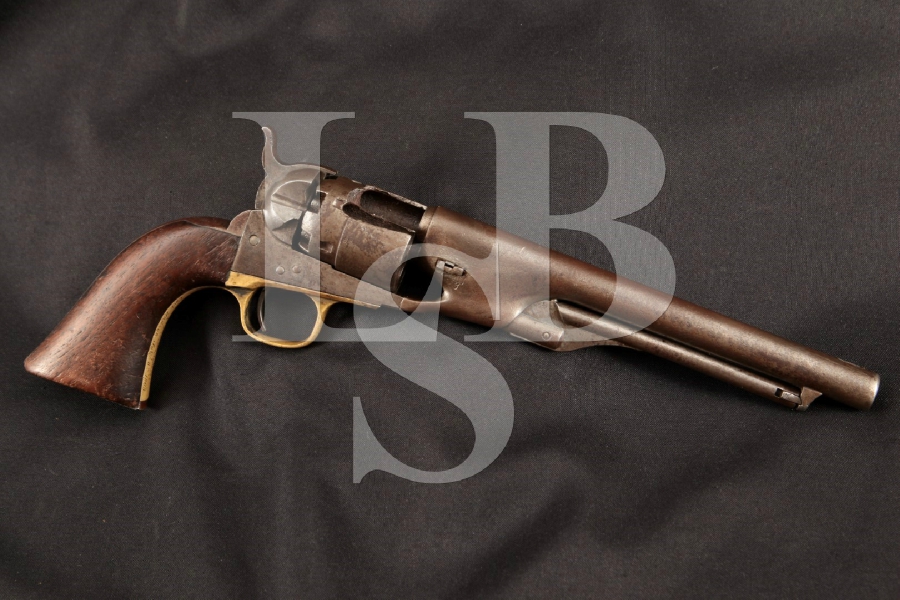 Sights / Optics: The front sight is missing from its slot. The rear sight is a small “V” notch in the hammer.

Stock Configuration & Condition: The grips are a one piece smooth walnut stock that retains nice fit to the grip straps, a few areas of splinter chipping are seen on the edges of the butt and at the frame / trigger guard locations. The wood has honest rubbing and oil stains, especially at the back straps portions. The stock has several scattered scrapes and dings, no cracks or major damages are seen. The grips rate in about Very Good overall condition.

Bore Condition: The bore is dark brown and the rifling is worn but still defined. There are scattered pits in the bore.

Overall Condition: Two of the cylinder’s chambers have exploded as photographed. The pistol’s surfaces have worn to bare metal, now covered with honest cocoa patina, exhibiting operational wear on the loading lever assembly polishing the surfaces to a decent sheen. The left of the barrel lug has heat coloring around the lug’s screw head, its slot is very marred. The pistol retains nice metal to metal fit, some bruises are found on the right of the barrel lug and edges of the cylinder. The cylinder scene is no longer visible, though the patent date has some defined characters, the other markings are clear. Overall, this handgun rates in about Fair condition because of the cylinder but would otherwise rate in Very Good condition as a battle worn piece of history.

Mechanics: The cylinder has wobble side to side, we believe this to have been from the massive explosion in the chambers. We did not fire this handgun. As with all used firearms, a thorough cleaning may be necessary to meet your maintenance requirements.

Our Assessment: The Colt Model 1860 Army revolver was easily one of the most popular revolvers on both sides during the American Civil War. Approximately 127,000 were purchased for use by Union forces and several of the Confederate states had obtained a few thousand before the start of the hostilities. The Model 1860 Army was the successor to the Third Model Dragoon and ranks third in total number produced of the various models of percussion Colt handguns. This revolver was made in 1862 and is overflowing with history. The front grip strap is named to an R.F. Newcomb, with a date of July 8th, 1863, located at Port Hudson, a 48 day siege that ended the very next day. We have several theories, but it may be that Mr. Newcomb perished just a day before the end of the siege, and the cause was probably two of four of the chambers exploding at the same time. With the revolver in outstretched arm, the chunk of metal may very well have snapped back, thus ending the war for one individual. Perhaps an accident was avoided and its owner wanted to remember the date his gun almost did the job of the enemy! Whatever the circumstance, this is an 1862 produced Colt Army, a gun famous enough with Western culture it hardly needs an introduction. All are collectible but few have as much display potential, whoever wins this revolver is going to be very happy.