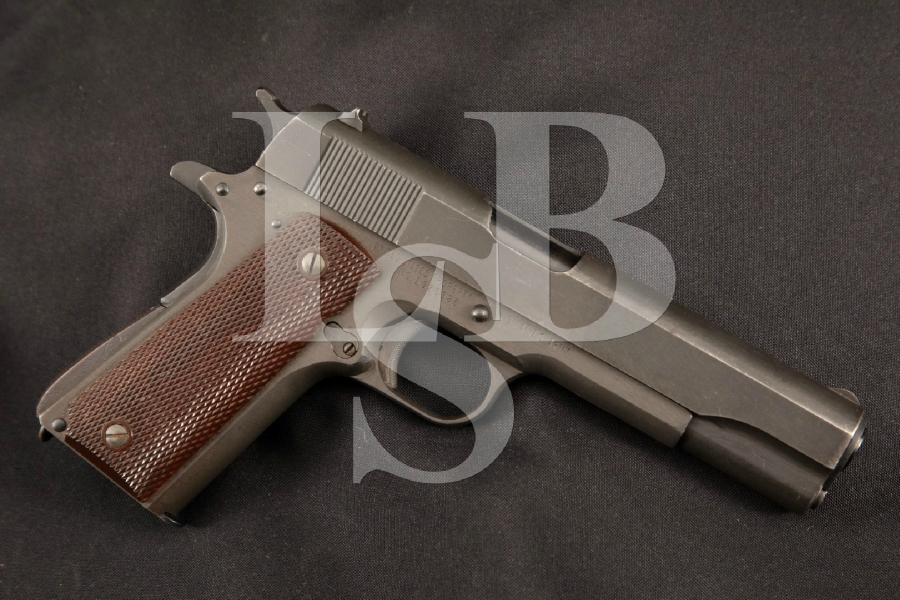 Sights / Optics: The front sight is a short blade with a mild ramp that has fine serrations fixed to the slide. The rear sight is a square notch dovetailed into the slide.

Type of Finish: The pistol has a grey parkerized finish and the barrel has a black oxide (blued) finish. The mainspring housing is knurled. The front half of the slide is slightly darker than the back half, a result of the heat treating process on the slide.

Finish Originality: The finish is original with sharp, clear stampings on the frame and slide.

Overall Condition: This pistol retains about 90-92% of its metal finish. There is thinning on the front edges of the slide and frame, the top edges of the slide and the edges of the trigger guard. There are several light handling marks scattered over the slide and frame, with a scratch through the finish on the left side of the trigger guard and a mark through the finish underneath the slide latch. The slide serrations are relatively sharp. The hammer knurling shows moderate wear, the recoil spring plug knurling shows light wear and the magazine release knurling is sharp. The knurling in the mainspring housing shows light wear. The grip screw heads are sharp and the markings are clear. Overall, this pistol rates in about Fine Plus condition.

Mechanics: The trigger pull is crisp. The slide is very tight to the frame. This pistol has manual and grip safeties, and this model does not have a magazine disconnect. The action functions correctly. We have not fired this pistol.

Box, Paperwork & Accessories: This pistol comes with a single blued magazine. The magazine is unmarked and roughly finished, with deep scratches under the finish on the sides and floorplate. The magazine is in about Fine condition.

Our Assessment: > The 1911 and 1911-A1 pistols served the military of the United States from 1911 to 1985, through two World Wars and the Korean and Vietnam wars. They gained a reputation as a reliable handgun with plenty of stopping power, and are held in high regard by those who have used them. Early in WWII, Colt couldn’t produce enough pistols for the military, and in 1942, contracts were let to Remington Rand, Ithaca, and the Union Switch and Signal Company to produce pistols. Ithaca didn’t procure enough manufacturing equipment to meet their schedules, and early pistols produced in 1942 used WWI surplus Colt receivers, and in early 1943 used slides and receivers purchased from Colt. By July 1943, full production was finally achieved. This pistol is a hybrid with a Remington Rand frame and an Ithaca slide. The finish is original and we couldn’t find any arsenal rework marks to explain the Ithaca slide on the Remington frame. The barrel is a WWII barrel, made by High Standard, who made barrels for both Ithaca and Remington Rand. The pistol is in about Fine Plus condition with about 90-92% of its original finish remaining. The bore is bright with sharp rifling and no erosion. This pistol is basically a parts gun, but its nice finish should still garner a lot of interest from the collectors of WWI and WWII pistols, some of whom will be interested in buying the pistol just for the parts. This pistol is also a nice find for anyone interested in a top quality pistol. It is perfect for home protection, SASS Wild Bunch side matches and auto pistol matches at your local club.