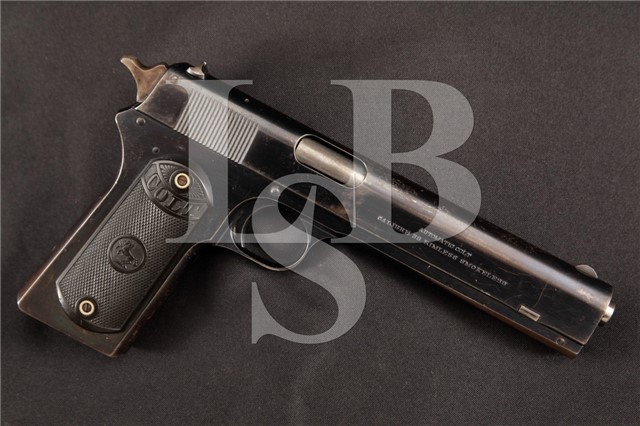 Sights / Optics: The front sight is a thin rounded blade fixed to the top of the slide. The rear sight is a rounded “U” notch dovetailed into the slide.

Stock Configuration & Condition: The grips are checkered black hard rubber with “COLT” in a banner across the tops of the grips and a circled Rampant Colt logo in the center of the grips. The grips show light wear in the checkering without mars. There are several light handling marks in the smooth borders with a sharp ding and a tiny divot out of the bottom edge of the right grip. The grips are in about Fine overall condition.

Type of Finish: The pistol is factory original blued and the hammer is case colored.

Bore Condition: The bore is bright with sharp rifling. There a few tiny spots of extremely light (microscopic) erosion at the muzzle. The bore condition is consistent with the exterior.

Overall Condition: This handgun retains about 90% of its metal finish. The top and sides of the slide are sprinkled with pinprick surface flaking. There is thinning on the upper shoulders of the slide, the underside of the frame, the front strap and the backstrap. There is also a spot of thinning on the right side of the slide behind the port and on the rear edges of the slide. There are light handling marks scattered over the slide, front strap and backstrap, with several light scratches in the frame above the left grip panel and tool marks around the pin above the trigger on both sides of the frame. The left forward trigger guard bow also has some marring from a rack or possibly a hoster. The bottom of the backstrap and the lanyard ring are developing a plum colored patina. The slide serrations are sharp. The hammer knurling shows light wear. Two of the grip screws are disfigured – one looks like a replacement. The markings are clear. Overall, this handgun rates in about Fine overall condition and is seen considerably better than most of this model despite the mentioned imperfections.

Mechanics: The action functions correctly, and the slide is tight to the frame. This pistol has a half-cock hammer safety, a spur hammer and the slide serrations are at the rear of the slide (late model). The slide release can be used to lock the slide back for cleaning. We did not fire this handgun.

Our Assessment: The 1902 is one of the most beautiful handguns ever made and an important link along the evolution line of the 1911. The wear is honest and the gun has an untouched appearance. This pistol was made in 1917 during WWI, when most of Colt’s production was geared up for 1911 pistols. Only about 700 Model 1902 pistols were made that year, making this wartime pistol rare. Its nice finish and wartime manufacture should make this a very nice find for the Colt pistol collectors.