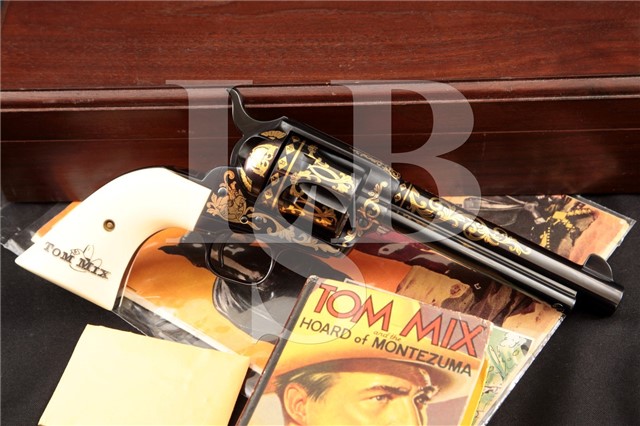 Markings: The left side of the barrel is marked “COLT SINGLE ACTION ARMY .45”. The top of the barrel is marked “COLT’S PT. F. A. MFG. CO. HARTFORD, CT. U.S.A.”, with the birth and death dates of Tom Mix in 24 karat gold, the revolver has scroll engraving “TM” monograms, “WITH HIS BOOTS ON” motif of Mix’s burial monument, horse head over “TONY”, with Tom Mix’s signature on the rear strap and lid of the display case. The left side of the frame is marked “Pat. Sept. 19, 1871 / July 2,72 Jan. 19,75” and with the “Rampant Colt” logo. The underside of the frame at the grip frame, the left side of the trigger guard and backstrap (under the left grip) are marked with the serial number and with “16” designation out of 50.

Stock Configuration & Condition: The grips are smooth white plastic panels with “TOM MIX” and a Stetson hat on the lower flanks. The left panel has a couple of tiny surface losses by the screw hole, the grips and frame do not have a through-pin to secure the grips entirely to the frame, none was provided. The grips are free of any other notable marks or damages. The grips rate about in Excellent condition.

Bore Condition: The bore is bright except for a few extremely persistent spots of fowling, which should come out with a thorough soaking. The rifling is sharp. There is no erosion.

Overall Condition: This revolver retains about 99% of its current metal finish, showing only a few tiny marks on the grip straps. The cylinder is free of a drag line, even on the gold plated areas, which would wear quickly even after a few rounds. The revolver has beautiful metal to metal fit and the gold accents are simply beautiful. The screw heads are sharp. The markings are clear. Overall, this revolver rates in about Excellent condition.

Mechanics: The action functions correctly. We did not fire this revolver.

Box, Paperwork & Accessories: This revolver comes with a Tom Mix walnut display case, showing a few minor scrape and ding marks on the exterior, the inside is formed to accommodate the include copyright 1937, original Tom Mix and the Hoard of Montezuma Big Little Book, with some compression and scuffing from storage and use, all text is legible. A 1951 No. 48 December Tom Mix Western comic is included, with a few spots of discoloration and small losses on the cover. The case comes with a key that is in an unopened factory envelope.

Our Assessment: From https://en.wikipedia.org/wiki/Tom_Mix “Mix went on to make more than 160 cowboy films throughout the 1920s. These featured action-oriented scripts contrasted with the documentary style of his work with Selig. Heroes and villains were sharply defined and a clean-cut cowboy always “saved the day.” Millions of American children grew up watching his films on Saturday afternoons. His intelligent and handsome horse Tony also became a celebrity. Mix did his own stunts and was frequently injured. In 1913 Mix moved his family to a ranch he purchased in Prescott called Bar Circle A Ranch. Mix spent a lot of his downtime at this ranch when taking a break from filming. A number of the movies were actually filmed in the Prescott home. During this time, Mix had success in the local Prescott Frontier Days rodeo, which lays claim to being the “world’s oldest rodeo.”[4] In 1920, he took first prize in a bull-riding contest. Today, his Bar Circle A Ranch developed into a master-planned community called Yavapai Hills where there’s still a street named “Bar Circle Ranch Road.” This is one beautiful revolver, a lot of effort went into depicting Mix’s portrait, the metal fit and finish is superb and the cylinder doesn’t even have a drag line (even on the gold plating!). The comic and book are going to bring a few people back to their childhood, only 50 of these revolvers were made and the literature is all original. The display case is great and will draw attention from anyone who is lucky to see this piece againa. All of the Colt SAA revolvers are collectible: 1st, 2nd or 3rd Generation, just to different degrees, and the high condition on this one will bring a premium.