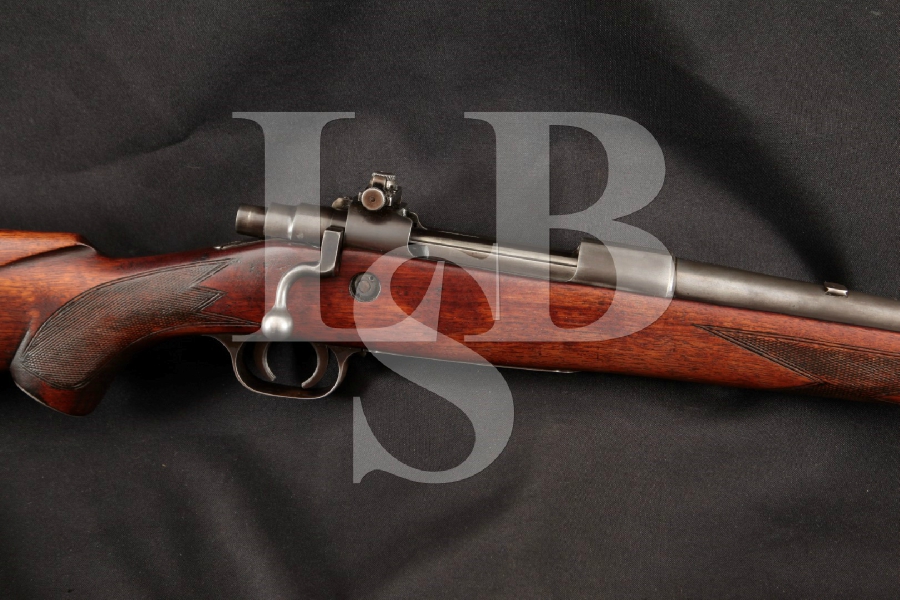 Sights / Optics: The front sight is a blade, pinned fore to aft into a barrel band. The rear barrel sight is missing, in its place is a Kings brand metal tab. The receiver has a vintage Lyman adjustable aperture sight with elevation adjustments on the left and hash marks on top for windage.

Stock Configuration & Condition: The stock is checkered walnut with a Schnabel forend tip and fluted comb, stretching down to form a pistol grip with a blue steel cap. The stock has oil staining and a few gouges on the butt areas. We could not find any cracks or major damages outside of a shallow crack seen on the inside of the stock by the trigger cut. The LOP measures 13 3/8” from the front of the trigger to the back of the metal butt plate; the plate no longer shows finish and has a honest patina, rating in Good Plus condition. The stock rates in about Very Good Plus overall condition.

Bore Condition: The bore is mid gray with worn, but defined 5-groove rifling. There is light erosion throughout the bore, the measurement at the muzzle is 0.262″.

Overall Condition: With the stock removed, healthy blue still appears on most surfaces. The exterior metal surfaces have heavy rubbing wear, with protected areas on the receiver’s top portion and on the triggers. The metal has an honest patina, we believe it saw scabbard use, the rear aperture sight is heavily rubbed. Scrapes and small spots of erosion are seen on some areas. The rifle remains beautiful and unique, please see our pictures. The screw heads are mildly tooled. The markings are clear but for the serial number under the receiver which is very shallow. Overall, this rifle rates in about Very Good condition.

Mechanics: The action functions correctly. The rifle has a reverse set trigger that currently does not set, the rear trigger has take up before a heavy break. The bolt has a series of three cuts on the right lug, which lock into the receiver, the extractor and obverse lug are like that of a Mauser. The internal magazine is a spring loaded lifter. The rifle takes down into two pieces with the floorplate unscrewed. We have not fired this rifle. As with all previously owned firearms, a thorough cleaning may be necessary to meet your maintenance standards.

Our Assessment: From https://sites.google.com/a/iroquoisarmscollectors.org/iroquoisarmscollectors/home/newton-arms-co “Newton rifle collectors seem to prefer the rifles that were made in Buffalo. Model variations have not been properly sorted out yet. Some rifles have two sets of serial numbers. Some of the very best Newton rifles were final assembled in Utica NY and downtown Buffalo (after the company on Jewett Pkwy closed) by final assembler Emil Flues. Aside from the German produced Newtons, every good Newton rifle ever produced went across the bench of Emil Flues. ” Only 1,000 of the Newton Buffalo factory Model 1924 rifles were ever assembled and sold, this one was made in early production, it has a very interesting action and is chambered for .256 Newton, a shortened .30-06 case with a smaller projectile, delivering impressive ballistics. This scarce rifle is sure to catch the collector’s eye, the serial numbers match and with some TLC, it should look great once more.