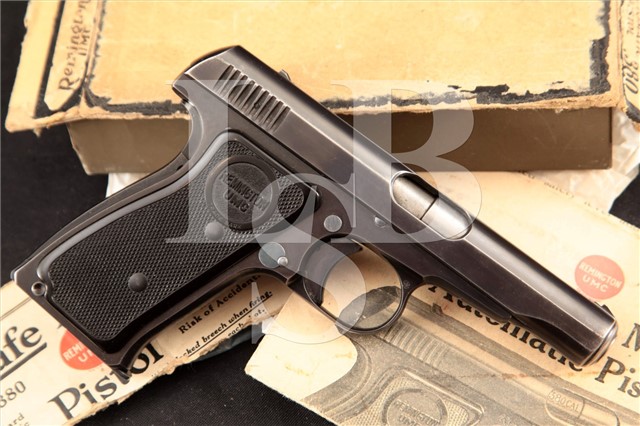 Markings: The top of the rib is marked “THE REMINGTON ARMS UNION METALLIC CARTRIDGE CO. INC. / REMINGTON ILION WKS. N.Y.U.S.A. PEDERSEN’S PATENTS PENDING”, a correct marking for serial numbers under 63,000 (Per Flayderman’s Guide). The left of the frame has the serial number, an anchor is found on the butt of the mainspring housing and right of the trigger guard bow, these are not navy markings, but are a factory inspection stamp. The grip panels have “REMINGTON / UMC / TRADE MARK” in circle on the upper flanks. The factory box has the pistol’s serial number written twice in pencil, the one under the box is much brighter than the one on the lid area.

Stock Configuration & Condition: The grips are black hard rubber with flank checkers and Remington / UMC embossing. The grips have light rubbing and a few compressed checkers, but since they are so fine, most of the marks go unnoticed until close review. The grips are in about Fine Plus overall Condition.

Bore Condition: The bore is bright and the rifling is still highly defined. There is no visible erosion in the bore.

Overall Condition: This handgun retains about 87% of its metal finish. The metal surfaces have some rubbing, especially at the edges, perhaps from holster use. The remaining blue is dark with nicely planed surfaces, rounded corners and the correct 9 groove count on the slide. The smaller case colored and fire blue components have BEAUTIFUL tone. Some nice plum patina is settling on the fore strap and trigger from indexing. The rear of the slide has a ding and a few other lighter marks are seen infrequently. The pistol, being from 1923, has held up quite well. The markings are crisp. Overall, this handgun rates in about Fine Plus to Excellent condition.

Mechanics: The action functions correctly and the slide has light play to the frame. It has a grip safety and manual safety. The pistol has a unique takedown (https://www.youtube.com/watch?v=H2jy1Wjy1bI), the grip safety must be engaged to open the slide; when locked back, the grip safety also puts the slide back into battery. We did not fire this handgun. As with all used firearms, a thorough cleaning may be necessary to meet your maintenance standards.

Box, Paperwork & Accessories: This pistol comes with its original Remington UMC box, which has heavier deterioration, some portions are missing, most are retained, most edges have worn through and the color has faded. Please see our pictures, the box has very old hand written serial numbers that match the pistol, it rates in about Poor to Fair condition. One 7-round magazine is provided, the floorplate is marked “U”, the right is marked “380 CAL”. The magazine has patina and rubbing, there are a few light marks, it rates in about Fine condition. A correct Model 51 owner’s manual is provided, showing some wrinkling, but is fully legible with mild wear, in Fine condition. An old cleaning brush and sheet of tissue paper are included as photographed.

Our Assessment: From https://en.wikipedia.org/wiki/Remington_Model_51 “The layout of the Remington 51 is similar to the Walther PPK pistol in the use of a stationary barrel and recoil spring surrounding the barrel. However, the unique feature is the use of a locking breech block within the slide. When the pistol is in battery, the breech block is held forward of the locking shoulder in the frame by the force of the recoil spring which holds the bolt face solidly against the end of the chamber. When the cartridge is fired, the bolt and slide move together a short distance rearward powered by the energy of the cartridge as in a standard blowback system. When the breech block contacts the locking shoulder, it hesitates, locking the breech. The slide continues rearward with the momentum it acquired in the initial phase forcing the hammer down and compressing the recoil spring around the barrel. This allows chamber pressure to drop to safe levels while the breech is locked and the cartridge slightly extracted. After the bullet leaves the barrel and pressure drops to a safe level, the rearward motion of the slide causes an inclined cam within the slide to lift the rear of the breech block free from its locking recess, continuing the operating cycle. One can insert a dowel into the barrel and push on the breech block. It will only move a fraction of an inch and stop against the recessed buttress. Only manually retracting the slide or firing a cartridge opens the gun. The Remington Model 51 was the only production pistol to utilize Pedersen’s type of operating system. Because the breech is locked, this pistol can handle greater pressures than a blowback firearm yet without the size and weight penalty of other locking systems. The design also allows the recoil spring to be placed around the barrel making for a shorter profile gun. Lighter operating parts and longer lock time provide less felt and actual recoil. A lower bore axis gives less muzzle rise which also lowers felt recoil. A fixed barrel allows for greater accuracy and reliability as well as simplifying construction compared to other locking systems. Overall, this system is lighter than a blowback, simpler than any conventional locking mechanism, and has less recoil than either of the other systems.” This pistol still looks fantastic. The original box, owner’s manual, magazine and bore brush put this scarce earlier production pistol near the top for best preserved 1920’s compact pistols seen in some time. The action takes a little while to figure out, the grip safety plays a huge role in operation and apparently the felt recoil is pretty low, making us jealous since we do not have time to shoot it. We believe the next owner will strive to keep it in its current condition but .380 is just so much fun. Please see our pictures and good luck.