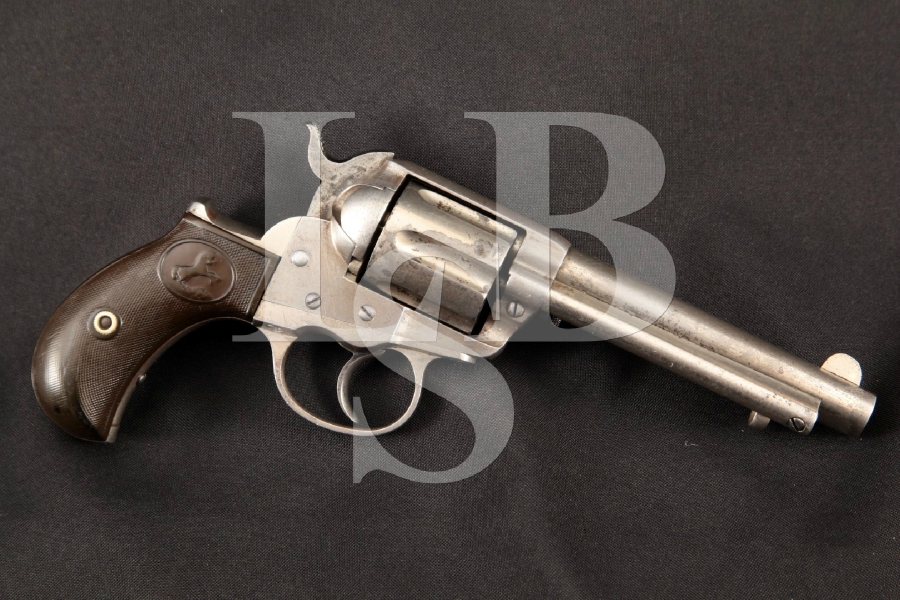 Sights / Optics: The front sight is tall thin rounded blade fixed to the barrel. The rear sight is a “V” groove in the top strap.

Stock Configuration & Condition: The grips are checkered brown hard rubber on the birds head grip frame, with a Rampant Colt in an oval at the top of grips. The grips have a small amount of shrinkage. The flanks have rubbing through the checkers in some areas along with scrapes and gouges. There are no visible cracks or major damages. The grips are in about Very Good Plus to Fine condition.

Bore Condition: The bore is semi-bright, the thin rifling is highly defined. There is mild pin prick erosion and a few spots of pitting present, it is definitely not the worst bore to come out of the 1880’s.

Overall Condition: The revolver retains a lot of beautiful nickel plating, there are semi-abrasive wispy scuffs on most surfaces. Areas of wear through the finish have dark metal and light pitting. The top of the hammer has a small amount of fire blue left, the rear has a solid patch of bright bluing. The trigger has indexing wear but still retains a good portion of fire blue on the rear as well. The cylinder has spots of black erosion from contact with burnt powder. The barrel at the muzzle and cylinder show heavier wear, we suspect from long term holster use, though it certainly adds some neat perspective to how often this revolver might have been used. For its age, it has survived very well, the grip straps are also worn from handling, its almost like shaking hands with a ghost! The screw heads are only lightly tooled, most have high retention of an almost purple flame coloring. The markings are clear. Overall, this revolver rates in about Very Good Plus to Fine condition for its age.

Mechanics: The cylinder produces tight full lockup in all chambers. The double action pull is smooth, single action is crisp, the mainspring is strong. We did not fire this revolver. As with all used firearms, a thorough cleaning may be necessary to meet your maintenance standards.

Our Assessment: From Wikipedia: “The Colt M1877 was a double action revolver manufactured by Colt’s Patent Fire Arms from January 1877 to 1909 for a total of 166,849 revolvers. The Model 1877 was offered in three calibers, which lent them three unofficial names: the “Lightning”, the “Thunderer”, and the “Rainmaker”. The principal difference between the models was the cartridge in which they were chambered: the “Lightning” being chambered in .38 Long Colt; the “Thunderer” in 41 Colt. An earlier model in .32 Colt known as the “Rainmaker” was offered in 1877. The M1877 was designed by one of the inventors of the M1873 Colt Single Action Army, William Mason, as Colt’s first attempt at manufacturing a double-action revolver and was also the first successful US-made double-action cartridge revolver. Neither “Lightning” nor “Thunderer” were Colt designations, nor used by the factory in any reference materials. Both terms were coined by Benjamin Kittredge, one of Colt’s major distributors, who was also responsible for the term “Peacemaker” for the Single Action Army. Old West Outlaw John Wesley Hardin frequently used both “Lightning” and “Thunderer” versions of the Colt 1877 revolver.”. The M1877 revolvers were made with and without ejector rods, this one has a nickel finish with fire blued hammer, trigger and screws. It is certainly beautiful. Colt’s craftsmanship is compared to, and even measured to a hair split six times, according to their master gun crafting employees. This revolver shows holster use and handling rub wear, it certainly has a lot to say in the way of an interesting past, with the high retention of its finish, smooth action and decent bore, it is going to make a lucky collector happy.