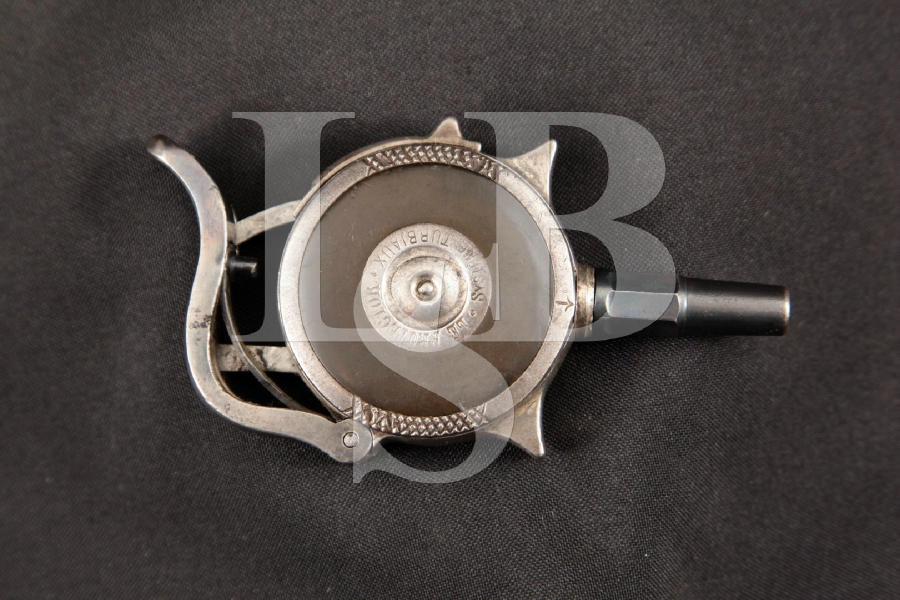 Make: This pistol was made in France by Turbiaux.

Year of Manufacture: 1882-1883, before production was moved to America under the Minneapolis Firearms Co.

Markings: The removable cap is marked “LE PROTECTOR / SYSTEME TURBIAUX”, its obverse is scribed “XX”. The inside of the frame is marked “441 / 496” with two proof marks.

Sights / Optics: There are no sights.

Stock Configuration & Condition: pistol has brown Gutta Percha ring, the material has a few gouges and scuffs, without major damages; the cap’s chckered areas have marring. The obverse of the frame has a brass disc as photographed, it shows natural patina and discolored rubbing, it has not been cleaned. The Gutta Percha ring is in Very Good condition for its age.

Finish Originality: No examples we have seen sport a blue barrel or squeeze lever, we believe these items were refinished a very long time ago.

Bore Condition: The bore is light gray with some dark persistent fowling on the grooves, the rifling is shallow by nature and still defined. There is extremely light erosion in the bore.

Overall Condition: The nickel plating of the cap and frame still hangs around in some areas, there is rubbing to bare metal with a general dark gray patina and light erosion. There is some cleaned erosion under the blue surface of the barrel, the palm lever has a few deeper pits and areas of pin prick erosion, it has a small amount of bright blue on the protected underside and on the lower curve. The removable plate has marring in the checkers, the brass disc on the obverse has multiple compression marks, rubbing and patina. The markings are clear. Overall, this handgun rates in about Very Good condition as having some older refinished parts.

Mechanics: The internal ring’s timing is off, but all of its edges are crisply defined, perhaps a skilled gunsmith can remedy this. The pistol is reloaded by turning the plate, an inner 10 shot ring can be taken out with the palm lever half depressed; it does not have much ‘snap’ to the firing pin like most modern firearms, it looks like the pointed pin is supposed to hit the cartridge with aid of a swift palm squeeze to light off a round. We did not fire this handgun. As with all used firearms, a thorough cleaning may be necessary to meet your maintenance requirements.

Our Assessment: From https://en.wikipedia.org/wiki/Protector_Palm_Pistol “The Protector Palm Pistol was first patented and built in France in 1882 by Jacques Turbiaux and sold as the “Turbiaux Le Protector” or the “Turbiaux Disc Pistol”. Later in 1883 it was built in the USA as The Protector by Minneapolis Firearms Co.. Peter H. Finnegan of Austin, Illinois bought the patent in 1892 and founded the Chicago Fire Arms Co. to make and market the pistols. In anticipation of the World’s Columbian Exposition in 1893, he contracted the Ames Sword Company of Chicopee, Massachusetts to manufacture 15,000 pistols. Ames made 1,500 of the pistols by the deadline of the exhibition. Finnegan sued for damages and engaged in a lawsuit with Ames. The company countersued and settled with Finnegan, but, through the years, had amassed a large production run of 12,800 pistols. The company sold the inventory and abandoned the design by 1910.[2][3][4]” This is a French made, 1882-1883 manufactured pocket pistol with a 10 round rotary magazine and palm squeeze action. It is among the coolest firearms to ever come by the shop and we think you might agree. It is begging to be put on display in your office, it is sure to bring a lot of attention to itself.