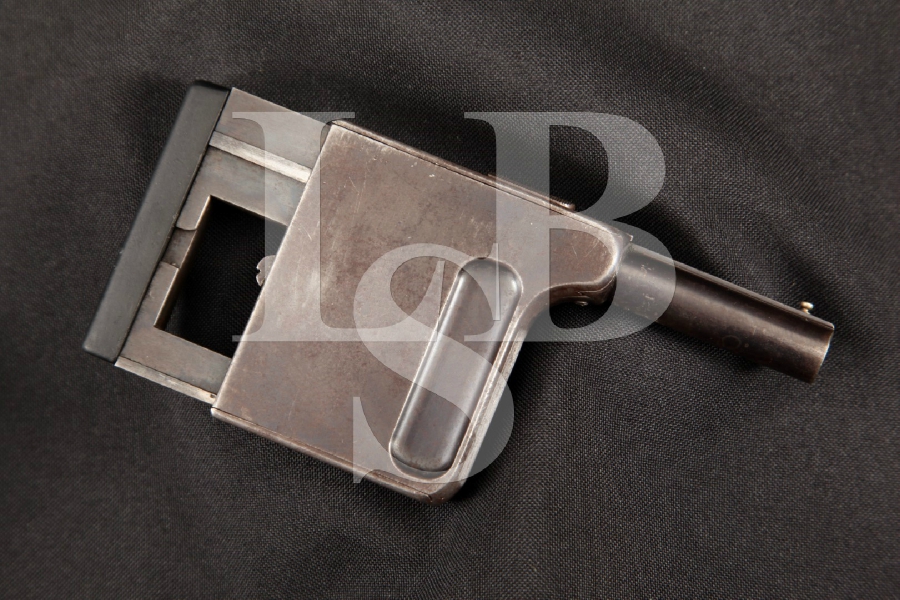 Year of Manufacture: 1897-1910 (The pistol first entered production in 1893 but was first called “Mitrailleuse”. It was re-named Gaulois in 1897. (https://books.google.com/books?id=okQH6zFgDtUC&pg=PA211&lpg=PA211&dq=manufrance+modele+de+poche&source=bl&ots=MEDTR6n-op&sig=2ojXkXdX4aOA0FHP4DIxJOd8TV4&hl=en&sa=X&ved=0CEoQ6AEwCWoVChMIm5vlytLqxwIVjS-ICh0-6AI9#v=onepage&q=manufrance%20modele%20de%20poche&f=false).

Caliber: 8mm Turbiaux. This is an antique cartridge that is no longer being manufactured.

Action Type: The action is double action only with an internal magazine. A round is inserted into the magazine as the grip is squeezed and fired when the bolt closes.

Barrel Length: The barrel is 2 1/8” in length and is round with a full-length flat rib on the top of the barrel.

Sights / Optics: The front sight is a small brass bead screwed into the top of the barrel. There is no provision for a rear sight other than sighting over the top of the sliding cover over the port.

Stock Configuration & Condition: The dovetailed palm piece is smooth black hard rubber. It slides freely on the rear reverse dovetail of the palm element, there are a few light marks but no major damages, it rates in Fine condition for its age.

Type of Finish: The receiver is case colored, viewed best with the right side plate removed. The plate is blue, along with the left side casing.

Bore Condition: The bore is light gray and the rifling is shallow but still highly defined. There are spots of mild erosion in the bore.

Overall Condition: The barrel has high blue retention, with a few light scrapes and shift to plum patina near the frame. The side plate and left of the frame have shifted to a nice cocoa patina, the edges remain sharp, there are some marks on the leading edges, indicative of pocket use. The case colored components have dull coloring on the exposed portions, but just under the side plate, you’ll see nice firey coloring. The top of the bolt body, viewed when forward in full battery, has exceptional color. The surfaces on the underside of the frame and grip system have some heavier marks and mild erosion. The screw heads have mild tooling. The markings are crisp. Overall, this handgun rates in about Very Good Plus to Fine condition.

Mechanics: The action functions correctly. There is a safety mounted on the left side of the receiver. It has three positions, the lowest being “D” for disassemble. The pistol fires in double action mode only. The left of the pistol has 5 witness holes. With the side plate removed, all of the internal mechanics can be seen and worked on, a fine option for having to clean out a waterlogged or soiled piece in the moment of need. We did not fire this handgun. As with all used firearms, a thorough cleaning may be necessary to meet your maintenance requirements.

Our Assessment: From http://unblinkingeye.com/Guns/Francais/francais.html: “In 1893 Manufrance began to manufacture a palm pistol known originally as Le Mitrailleuse (usually translated as “machine gun”), but which was renamed to Le Gaulois within a year or two (actually 1897). This was a magazine-fed “palm -squeezer” that fired the existing 8mm cartridge used by the Turbiaux Le Protector rotary palm pistol. Manufacture of the Gaulois continued until 1910. Sales of the gun declined steadily with the advent of true self-loading semi-automatic pistols, some of which were smaller and more easily concealed than the Gaulois.”. This an exceptional example of a rare Gaulois No. 1 pistol. This pistol is in about Fine condition with about 69% of its original finish remaining. The pistol is certainly unique, we have only seen a couple come through in the years we have been doing business. With the side plate removed, it is a PERFECT display piece. The barrel, right sideplate and frame have matching serial numbers. This is a fantastic find for the collector of French handguns and of small pocket and palm pistols. This model wasn’t made for that many years and the 8mm cartridges it fired were black powder.