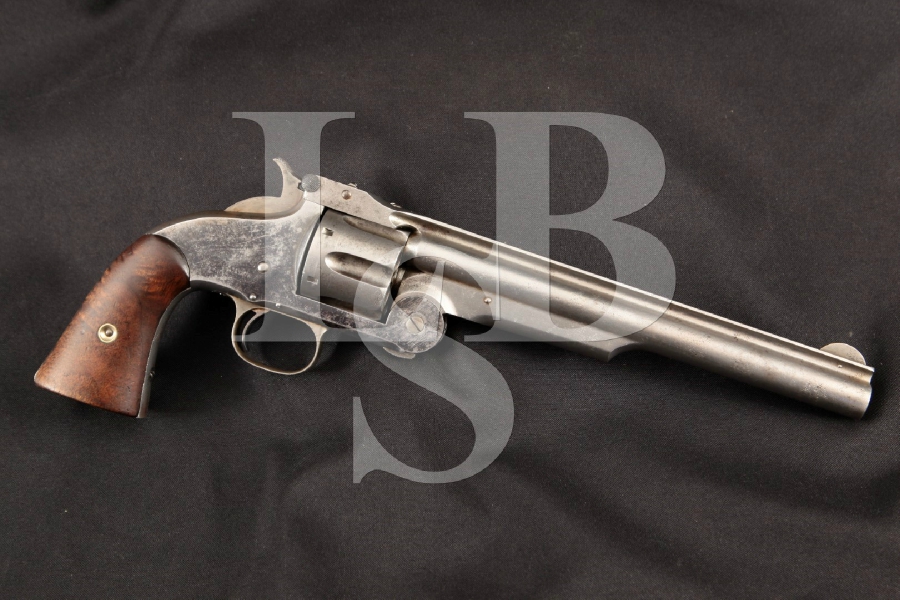 Barrel Length: The barrel has a full-length fluted top rib and is 8” in length.

Sights / Optics: The front sight a thin half-round blade pinned to the rib. The rear sight is a “U” notch in the barrel latch.

Stock Configuration & Condition: The grips are smooth walnut, the inside of the right panel is serialized to the pistol. The grips have surface cracks from the escutcheon holes on the inside. The right panel has a small crack on the butt, the rear has six shallow marks on the rear portion, the butt of both panels have heavier marks, the left panel has a few moderate depth scrapes. Both have nice fit to the escutcheons and grip straps, their grain is beautiful, they rate in about Very Good overall condition.

Type of Finish: The revolver is blued with a case colored hammer and trigger.

Bore Condition: The bore is bright in some areas, most surfaces have dark spots of surface erosion and mild pitting. The rifling is still highly defined.

Overall Condition: This handgun retains about 25% of its original metal finish, the barrel, trigger guard, grip straps and cylinder look to have been cleaned at some point without sacrificing the overall lines of the metal and markings. There are spots of moderate pitting, it now has a light gray sheen; a few scrapes, dings and bruises are also noted. The frame and left side plate still have a few spots of bright bluing. There is a hole in the rear strap along with a shoulder stock slot, we are unsure if this was done at the factory, the metal surfaces are not as finely finished as the other areas, the hole on the back strap has an uneven cut just underneath, there are some sanding marks on the back strap. The screw heads are lightly tooled but highly serviceable. There is a screw installed in the butt strap, where a lanyard ring may have once been mounted. The markings are clear. Overall, this handgun rates in about Very Good condition.

Mechanics: The action functions correctly. The barrel lockup is nice and snug, the cylinder lockup shows a small amount of play in all chambers. The mainspring is strong, the hammer must be cocked back to its first position before the barrel can be released. The trigger pull is crisp. We did not fire this handgun. We did not fire this handgun. As with all used firearms, a thorough cleaning may be necessary to meet your maintenance standards.

Our Assessment: From https://en.wikipedia.org/wiki/Smith_%26_Wesson_Model_3 “Smith & Wesson produced large numbers of the Model 3, in three distinct models, for the Russian Empire by special order. The first was the 1st Model Russian (the original order design), with the Russian Ordnance Inspector mandating a number of improvements to the design, resulting in the 2nd Model Russian, with a final revision to the Russian design being known as the 3rd Model Russian.[3] Smith & Wesson nearly went bankrupt as a result of their Russian Contract production, as the Imperial government assigned a number of engineers and gunsmiths to reverse-engineer the Smith & Wesson design, and then began to produce copies of the revolver—both in their own arsenal at Tula and by contracting other manufacturers in Germany and elsewhere in Europe to manufacture copies of the revolver (a common practice at the time—Webley & Scott’s British Bulldog revolver was widely copied, too, by European and American gunsmiths).[3] The Russian and European copies of the S&W Model 3 revolver were generally of very high quality, but considerably cheaper than the S&W produced revolvers. This led to the Imperial government cancelling the order for significant quantities of Smith & Wesson–made revolvers (which Smith & Wesson had already produced), and delaying (or refusing) payment for the handguns that had already been delivered.[4]” This is a commercial No. 3 that would have been sold in the United States and not to the Russians; it is quite a mighty weapon that would have been feared and admired in post-Civil War America, when most people were still mostly equipped with percussion and flintlock systems. Not only are all major parts correctly marked, the right grip even shares the same serial number as the frame. At some point, a shoulder stock slot was milled into the butt strap of the grip frame, the back strap has a hole drilled, we believe to accommodate the top of the stock bracket; whether this was done at the factory or not, this piece is going to stir up the collectors simply for its beautiful aesthetics, remaining blue finish and strong action. We have to say, outside of the new First Lady, this is our favorite Russian model! Please see our pictures and good luck.