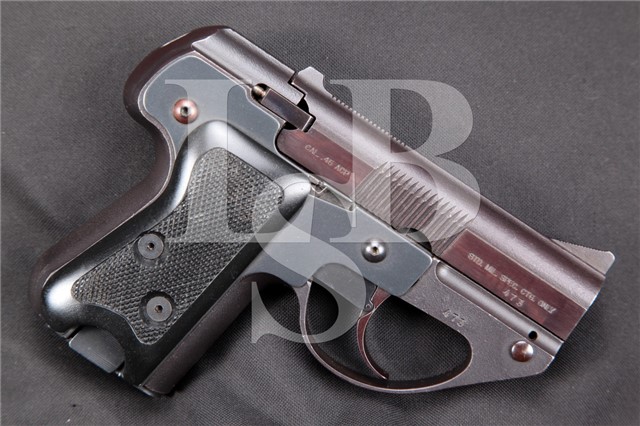 Year of Manufacture: Semmerling pistols were made at the Boston, Mass. Plant from 1978-1982

Sights / Optics: The front sight is a fixed serrated ramped blade. The rear sight is a square notch on the slide.

Stock Configuration & Condition: The grips are black plastic panels with checkering and smooth borders. There are compressions to checkers on both panels with scuffs, handling marks and scratches in the smooth areas. Please see our photographs. The grips rate in about Very Good to Fine overall condition.

Bore Condition: The bore is bright and the rifling exhibits light wear. There are small patches of pin prick erosion in the bore.

Overall Condition: This handgun retains about 95% of its metal finish. The slide and frame have portions of polished and matte metal; the matte portions have casting marks which gives a rich texture and nice contrast to the polished portions. There is wear on the feed ramp and portions of the slide and frame from interaction during operation. The bluing varies from a plum to violet and reddish hue which adds to the character of the pistol; please see our photographs. There is some thinning on the leading edges of the slide and trigger guard. The hex screw heads are sharp. The markings are crisp. Overall, this handgun rates in about Fine Plus condition given the compressed checkers mentioned above.

Mechanics: The action functions correctly. For a detailed breakdown of this pistol’s operation and history, please visit this write up from a previous sale of ours: https://www.lsbauctions.com/2576/rare-semmerling-manually-operated-slide-lm-4-lichtman-model-4-45-acp-repeating-pistol-45acp-blued-information/ . The double action only trigger pull is smooth and without interruption. We did not fire this handgun. As with all previously owned firearms, a thorough cleaning may be necessary to meet your maintenance standards.

Box, Paperwork & Accessories: One 4-round magazine is provided as photographed, exhibiting wear marks, rating in about Fine condition.

Our Assessment: From Wikipedia:” The goal of the LM4 was to achieve a combination of the highest practical firepower in as small and light a gun as possible, so as to be easily concealable. This was approached by selecting the service caliber of .45 ACP for its proven stopping power and opting for a manual repeating mechanism to minimize bulk and weight and ensure flawless operation in the most difficult situations. Because of this the LM4 was first offered to the U.S. Army and government agencies. The Semmerling LM4 has 33 parts (including screws), making it one of the simplest guns ever made. In the original design, every part except for the springs was made of high-quality S-7 tool steel. Every pistol was Magnafluxed (a method of testing ferrous metals for surface and subsurface flaws) twice in their assembly, making the LM4 one of the most carefully constructed pistols produced. Each pistol was essentially handmade to order with production averaging a little over ten pieces a month, while maintaining very strict quality control procedures to ensure a high degree of reliability and functionality. Of the LM4 model, only about 600 were ever produced. Although the Semmerling was intended as a back-up pistol for those most at risk of having their primary weapon taken from them, some adopted the pistol as a “hide-out” weapon. Capable of a “shot-a-second” firing rate, a practiced shooter can achieve an outstanding shooting performance. With the magazine loaded and a round in the chamber, the Semmerling LM4 is capable of carrying five .45 ACP rounds.” That pretty much says it all. This is a rare and high quality handgun. Colonel Jeff Cooper was a big fan. Here is a link to our website with a very interesting compilation of information about the Semmerling: https://www.lsbauctions.com/2576/rare-semmerling-manually-operated-slide-lm-4-lichtman-model-4-45-acp-repeating-pistol-45acp-blued-information/. About 95% of the finish remains, the grip panels are in Very Good to Fine condition with areas of compressed checkering and minor scuffs.