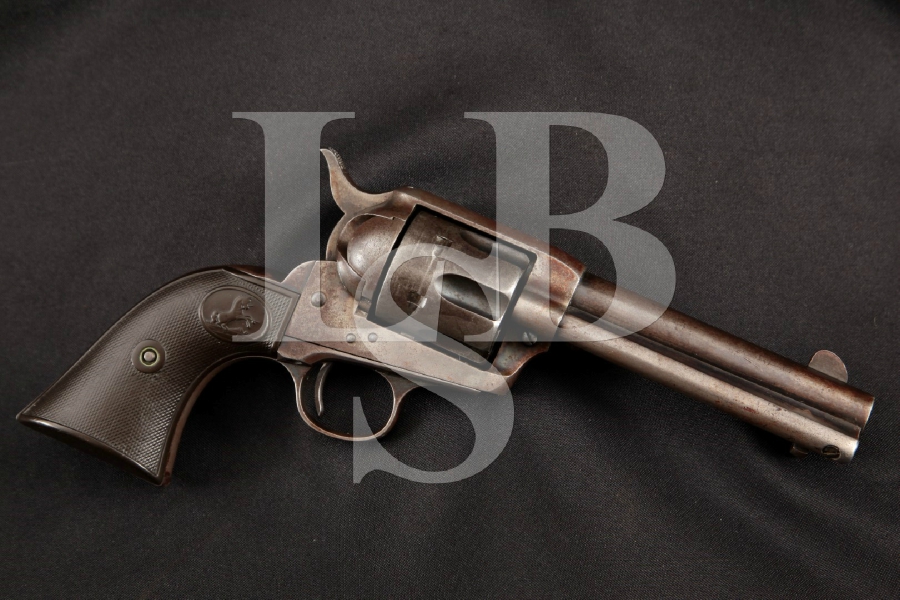 Sights / Optics: The front sight is a quarter-round blade fixed to the barrel. The rear sight is a “V” groove in the top strap.

Stock Configuration & Condition: The grips are black hard rubber with Rampant Colt logos in oval on the upper portions, atop the checkering. The grip have a few tiny marks and rubbing in the checkers, there are no major damages, the butt of both have a few dings, the left panel has “X=X” carved on the butt. The grips are in about Very Good Plus to Fine condition.

Bore Condition: The bore is light to light gray and the narrow lands in the rifling are well defined. There are a few spots of mild erosion, though the general spread of the surfaces are without notable damages. The chambers of the cylinder are light gray without erosion, please see our pictures.

Overall Condition: This revolver retains about 40% of its metal finish. Spots of finish remain on protected areas, amid some honest brick-red surface oxidation, some instances have developed to light pin prick erosion. The frame and flutes of the cylinder have a few bright spots of finish remaining. The barrel has some mild, darkened surface erosion, heavy dings are seen on the ejector rod housing and barrel. The metal to metal fit is flush but for a tiny gap on the right at the frame and trigger guard plate. The screw head slots are lightly tooled but highly service. The markings are crisp. Overall, this revolver rates in about Very Good condition.

Mechanics: The action functions properly. The cylinder produces about 1/32″ side to side play in full lockup of all 6 chambers with no measurable back play. The hammer has a strong mainspring and the trigger pull is crisp. We have not fired this pistol. As with all used firearms, a thorough cleaning may be necessary to meet your maintenance requirements.

Our Assessment: From https://en.wikipedia.org/wiki/Colt_Single_Action_Army “The power, accuracy and handling qualities of the Single Action Army (SAA) made it a popular sidearm from its inception, well into the 20th century. The association with the history of the American West remains to the present century, and these revolvers remain popular with shooters and collectors. George S. Patton, who began his career in the horse-cavalry, carried a custom-made SAA with nice grips engraved with his initials and an eagle, which became his trademark. He used it during the Mexican Punitive Expedition of 1916 to kill two of Pancho Villa’s lieutenants, and carried it until his death in 1945 shortly after the end of World War II.[31]”
This 1st Generation, early Smokeless powder revolver still has about 40% of its blue and case colored finishes remaining; the bore still has highly defined rifling and only a few spots of mild erosion. The action is still crisp, as are the markings and trigger pull. This 117 year old revolver is not looking bad at all, it has handling and holster wear to thank in most part to the finish losses, we can only imagine what the “X=X” marking on the butt of the left grip panel means, it should invoke conversations for many generations to come and is a solid piece of American history! Please see our pictures and good luck.