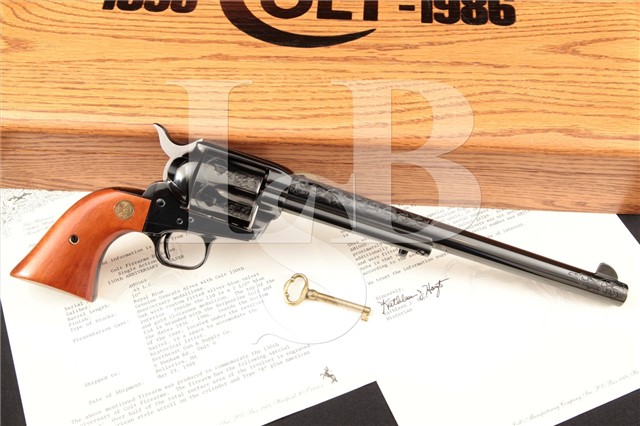 Year of Manufacture: 1988, per the factory letter.

Markings: The top of the barrel is marked “COLT’S PT. F.A. MFG. CO. HARTFORD, CONN. U.S.A. / 1836 * 150TH ANNIVERSARY * 1986”, the underside is marked “45”. The left side of the frame is marked “Pat. Sept. 19, 1871 / “” July 2-72 / “” Jan. 19-75”. The underside of the frame is marked with the serial number. The left front of the trigger guard is marked with a “VP” in a triangle and at the rear with “5”. The back strap of the grip frame has a beautiful rampant colt (also found on the medallions of the stock and inside lid of the display case), surrounded by “150 YEARS OF COLT CRAFTSMANSHIP” in gold auroplated lettering with embellishment patterns down to the heel. The revolver has 50% Type-B American and Type-B Plus (on the barrel) scroll engraving from the factory as lettered. The assembly code “W5739” appears on the left of the grip straps, the rear of the frame shares this number, the inside of the grip panels are marked “5739”.

Stock Configuration & Condition: The grips are beautiful amber toned Goncalo Alves with brass 150th Anniversary medallions on the upper flanks. The stocks show only the faintest of scuffs, looking to be from storage, we had a hard time determining whether or not they were worth mentioning as they are small and mostly go unnoticed. The grips rate about in Excellent Plus condition.

Overall Condition: This revolver retains about 99% of its metal finish. The revolver lacks any evidence of being fired outside of factory testing. There is not a drag line on the cylinder, only a couple of minuscule scuffs can be found, and that is with a magnifying glass. The screw heads are sharp and the markings are clear. Overall, this revolver rates in about Excellent Plus to Mint condition.

Mechanics: The action functions correctly. We did not fire this revolver. As with all used firearms, a thorough cleaning may be necessary to meet your maintenance requirements

Box, Paperwork & Accessories: This revolver comes with a 150th Anniversary walnut display case, measuring 19 5/8″x9 1/2″x3″, with “1836-1986 / COLT” on the lid, medallion on the inside of the lid and a brass lock. One key is provided for the lock, in a white envelope. The rear back flat of the case has what appears to be white paint, in a small area, there are scrape marks on the underside, the interior has minor wear; the case is in Fine Plus to Excellent condition. Also included is a Colt factory letter confirming the shipment date of May 19, 1988 to Northeast Gun & Supply Co. in Bellerica, MA. The letter is two pages, the items are in Excellent condition without any notable damages.

Our Assessment: From https://en.wikipedia.org/wiki/Colt_Buntline “The Colt Buntline Special is a long-barreled variant of the Colt Single Action Army revolver, which Stuart N. Lake described in his best-selling but largely fictionalized 1931 biography, Wyatt Earp: Frontier Marshal. According to Lake, the dime novelist Ned Buntline commissioned the production of five Buntline Specials. Lake described them as extra-long Colt Single Action Army revolvers, with a 12 inches (300 mm)-long barrel, and stated that Buntline presented them to five lawmen in thanks for their help in contributing local color to his western yarns. Lake attributed the gun to Earp, but modern researchers have not found any supporting evidence from secondary sources or in available primary documentation of the gun’s existence prior to the publication of Lake’s book. After its publication, various Colt revolvers with long (10-inch or 16-inch) barrels were referred to as Colt Buntlines or Buntline Specials.” This is a beautiful 150th Year Anniversary Buntline in .45 Colt, with factory lettered American Type B scroll engraving and gilding on the backstrap. No evidence of use outside of the factory appears, it is nearly spotless and comes in a beautiful display case, suitable for any higher end Colt collection. According to the factory letter, this limited edition revolver was in the serial number range from AM0001 through AM1000, with a total of 490 produced. An opportunity like this won’t come around often, especially in this condition. Please see our pictures and good luck.