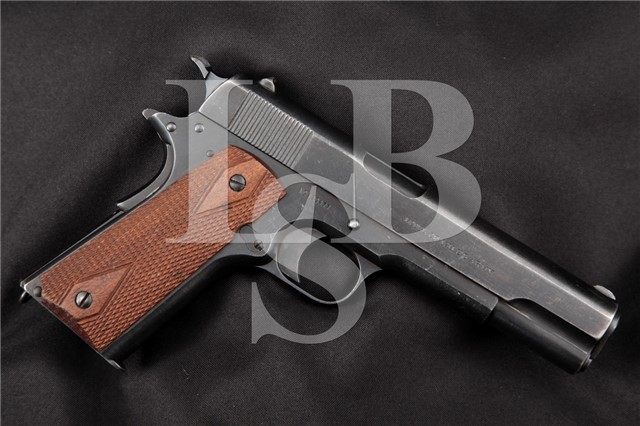 Stock Configuration & Condition: The grips are checkered walnut with smooth diamond shapes around the grip screws. The left grip is noticeably darker than the right grip and has a dark spot of oil staining and moderate wear in the checkering in the center of the grip. Otherwise, there is only light wear in the checkering. The left grip also shows a few light marks in the smooth diamonds. The grips rate in about Very Good to Fine condition.

Type of Finish: The slide and frame both have a blued finish that shows wire wheel marks under their finish. The mainspring housing and the front face of the trigger are smooth.

Finish Originality: To us, the finish appears re-finished. However, on page 41 of his book “U.S. Pistols and Revolvers”, J.C. Harrison states that “These Colt pistols, S/N 128,617 to 133,186, do not exhibit the workmanship of other documented Colt models produced within the same time frame”. Furthermore, when these guns were sent back to Springfield Post war, 989 Pistols were cleaned refinished and repaired with new surplus parts on hand. Depending on one’s definition of workmanship, the finish could be original. This is the first hybrid pistol in the documented serial number range we can remember seeing, and just don’t have enough experience to be definitive on the finish.

Bore Condition: The bore is a mottled bright/gray. The rifling is sharp. There is extremely light erosion sprinkled throughout the bore.

Mechanics: The trigger pull is crisp. The slide is very tight to the frame. This pistol has manual and grip safeties, and this model does not have a magazine disconnect. The action functions correctly. We have not fired this pistol.

Our Assessment: This 1911 pistol was assembled by Colt in 1916 using a Colt slide and a frame from Springfield Armory, then may have been returned to Springfield armory sometime between 1921 and 1923 when Springfield cleaned refinished and repaired 129,457 M1911 pistols. And 989 of the pistols were assembled from new surplus parts on hand at the time. In his book Page 41 “U.S. Pistols and Revolvers 1909-1945”, J.C. Harrison states that pistols with serial numbers from 128617 to 129616, were assembled by Colt with Colt slides and frames supplied by Springfield Armory. Springfield Armory stopped production of pistols early so they could concentrate on M1903 rifles, and apparently gave their supply of parts to Colt. The pistols ended up in the Springfield Armory assigned range of serial numbers, and without all of the assembler marks and final acceptance marks normally seen on Colt pistols. One of the reasons for this is that the frames were already government property. Mr. Harrison also states that the workmanship seen on this pistols is not as good as other known Colt pistols produced during the same period, but it is not clear if this is regarding the fit or finish, and to what extent. This pistol has wire wheel marks under its finish, and the pinprick surface erosion on the underside of the slide appears to be under the finish. With only 1000 pistols falling in this spread, we haven’t seen any before that we recall. What would normally concern us with a replaced post-war barrel and the miss-match in the coloring of the grips does not on this pistol given the possible lineage. The pistol is in about Very Good condition with about 78% of its current finish remaining. The pistol shows thinning on the edges of the slide and frame and on the bottom edge of the grip safety. This pistol has collector value simply because it is one of 1000 known pistols made by Colt with Springfield Armory frames. We think the pistol was refinished at Springfield Armory between 1921 and 1923, but are not positive.