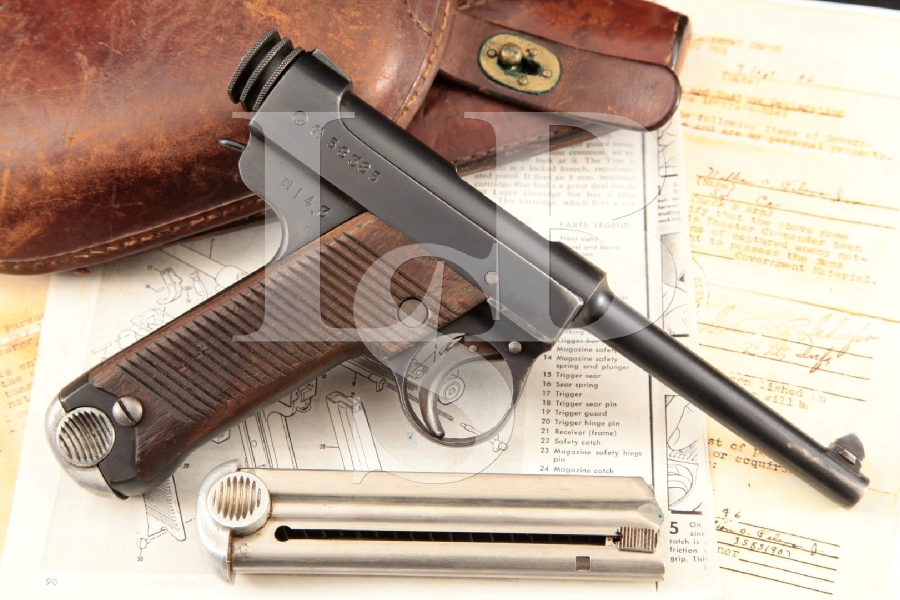 Markings: The left side of the receiver has a “Safe” and “Fire” indication mark on either side of the safety switch, followed by four Japanese characters. The right side of the receiver has Nagoya Kokubunji’s markings for a first run of production. This is followed by the serial number “58385”. Below these marks on the frame is the Japanese character for “Sho” followed by the date code “14.3” and a final inspection mark. The inside of the left grip is hand written with “385”, which is found on ALL serialized parts, corresponding correctly with the serial number, there are also inspection marks present on the smaller components.

Sights / Optics: The front sight is a blade dovetailed into a slightly raised base on the barrel which appears as an inverted “V” when viewed from the rear. The rear sight is a square notch milled into a boss on the top rear of the frame.

Stock Configuration & Condition: The grips are slab sided mahogany with 24 horizontal serrations. Both grips show compression and scrape marks, there are no major damages, there are a few small chip losses and a drag line from the safety on the left panel. The grips rate in about Very Good overall condition.

Overall Condition: This handgun retains about 90% of its metal finish. The front strap of the grip frame at the magazine well bulge has some crude finishing and scrapes, looking to be very old. There is indexing wear on the front of the trigger, guard and on the grip frame straps along with several small bruises. There is holster wear on the frame, receiver and barrel edges, most of the finish is highly retained with crisp markings. Some filing marks are seen on the metal under the finish as photographed. The grip screws are mildly tooled and the markings are clear. Overall, this handgun rates in about Fine condition.

Mechanics: The action functions correctly. The receiver is tight to the frame. We did not fire this handgun.

Box, Paperwork & Accessories: Included are two era correct magazines; one is marked 538 with two inspection marks on the spine, the other is marked 408 and “N”; these items have strong springs and a few mild marks, retaining most of their plating, rating in Fine Plus condition. 8 rounds of 8mm Nambu ammunition is included (we must ship this ammo separately in order to comply with federal law, hence the slightly higher shipping price), showing natural tarnish, the ammunition is also covered in verdigris and looks to have been together for most of its life, though it is commercial ammunition marked “FC 8MM NAMBU”. A correct brown leather flap holster is included, showing some heavier scrapes, veridgris around the brass and darkening; the stitching is still strong though some is disrupted by pressure on the lid; the inside of the flap has very old hand writing in ink, we could read “WOF / 35851907 / W. FELSMAN / TROOP 8TH CAV APO 201”, the name and troop number is recorded in four included photo copies of Government WWII bringback paperwork; the serial number of the pistol is not recorded on the paperwork, the consignor confirms all items have been kept together the life of his ownership. The holster has a small square piece of leather hanging from one of the strap buckles, please help us identify this tab. The paperwork is in Excellent condition; an old photocopied disassembly manual is included, in Fine condition. An included steel cleaning rod is housed in the holster, without major damages, in Excellent condition.

Our Assessment: This is a Nambu Type 14 pistol made by Nagoya Kokubunji in March of 1939. What else could be more historic than a documented WWII GI bringback that has all all parts matching (minus the magazines) and a holster that looks to have been with the gun the entire stretch after the war ended. The pistol retains 90% of its finish and has a strong, bright bore. The 8mm Nambu is a bottleneck cartridge that pushes a 102 gr. bullet at a little over 900 fps. and has approximately the same power as a .380 ACP cartridge. This pistol is reported to have been brought back by a William O. Felsman, PFC, who is also documented as having become a Sergeant, the items were documented before V-J Day in the Pacific. How the PFC attained this weapon is beyond anyone’s guess but given the horrific nature of the Island Hopping campaign, it gives us chills giving thought to its eventuality. The pistol comes with two magazines, 8 rounds of 8mm Nambu (Headstamp is marked “FC 8mm NAMBU”, the included flap holster’s lid has Felsman’s troop number and 8th Cavalry marking; for more information on the unit’s involvement in WWII, please visit https://en.wikipedia.org/wiki/8th_Cavalry_Regiment#World_War_II. This is a very nice find for the collector of WWII and/or Japanese weapons, it will be the envy of ANY safe.