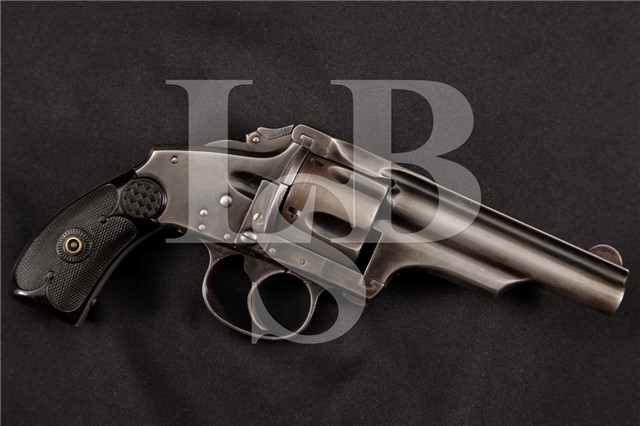 Make: The revolver was made by Hopkins & Allen for Merwin & Hulbert, who distributed the revolvers.

Barrel Length: The barrel is 3 ½” in length with a full top rib and 2/3 underlug.

Sights / Optics: The front sight is a thin half-round blade pinned to the rib. The rear sight is as a small “V” notch at the top rear of the top strap.

Stock Configuration & Condition: The grips are checkered black hard rubber on a square butt grip frame. The grips have a smooth diamond shape around the grip screw and round circles at the tops of the grips filled with a checkerboard pattern. There are a few scratches in the bottom surfaces of the grips and a few light handling marks in the smooth borders. The checkering shows light wear without mars. The grips rate in about Fine overall condition.

Type of Finish: The revolver has been cold blued over remnants of the original finish. The cold bluing imparted a thin greyish finish.

Bore Condition: The bore is gray with sharp rifling. There are spots of moderate erosion scattered throughout the bore.

Overall Condition: This revolver retains about 95% of its current metal finish. There are small spots of light pitting scattered over groove between the barrel and its underlug on both sides, the groove between the barrel and its top rib on the right side, the cylinder latch, the cylinder, the sides of the trigger guard, the loading gate and the edges of the recoil shields. There is a ding under the finish on the right side of the barrel lug, a bruise at the front of the cylinder, a tiny mark in the left side of the hammer and a few tiny dings near the front edge of the barrel’s underlug. The cylinder doesn’t have a drag line. The screw heads are sharp. The barrel markings mostly clear except for the last date, which is very thin. Overall, this revolver rates in about Fair condition as re-finished.

Mechanics: The action functions correctly in single action, with barely perceptible play in the cylinder and barrel lockups. If the trigger is pulled sharply in double action, the cylinder sometimes rotates a few degrees past where the bolt should have stopped it. The bolt comes up in plenty of time to catch the bolt stop cuts on the cylinder but we suspect a little too much material was removed from the circumference of the cylinder and/or the bolt spring is not quite stiff enough. We suspect the bolt could be modified to protrude slightly more through the frame. This revolver has a folding hammer spur. We did not fire this handgun. As with all used firearms, a thorough cleaning may be necessary to meet your maintenance standards.

Our Assessment: Merwin, Hulbert & Co. were not manufacturers or makers of guns. There were a group of New York City gun and sporting goods dealers who had a major interest in Hopkins & Allen Firearms of Connecticut and had Hopkins & Allen make guns for them under their own name. Sometimes they sold guns marked with the Hopkins & Allen name, and some guns were marked with both names, but all were made by Hopkins & Allen in Connecticut. This is a .38 Medium Frame DA Pocket Revolver with a square butt and folding spur hammer. This model pistol has a latch on the bottom of the frame which when pushed back allows the barrel and cylinder to be twisted off the frame, finally released by a 2nd latch on the left side of the barrel’s underlug. The revolver also has a loading gate, which is pushed down to get access to the cylinders, although there is no provision for an ejector. Besides its unique design, this pistol is also unique in that it has a folding hammer spur, which was not installed on all guns of this model. This pistol has been refinished and is in about Fair condition with about 95% of its current finish remaining. Although the gray with sharp rifling and spots of moderate erosion. The cylinder and barrel lockups show a barely perceptible amount of play, but the bolt does not always stop the cylinder at the next chamber when the trigger is pulled sharply in double action. The bolt timing is correct – we think a little too much metal was removed from the cylinder when it was refinished and/or that the bolt spring is a little weak. It is probably possible to modify the bolt so that is protrudes a little further through the frame. With its folding spur hammer, matching serial numbers and otherwise great mechanical condition, this revolver should be of interest to the antique revolver collectors out there. With just a little effort, the double action mode can be made to work as well as it does in single action, and this would be great for Pocket Pistol side-matches at your local Cowboy Action club.