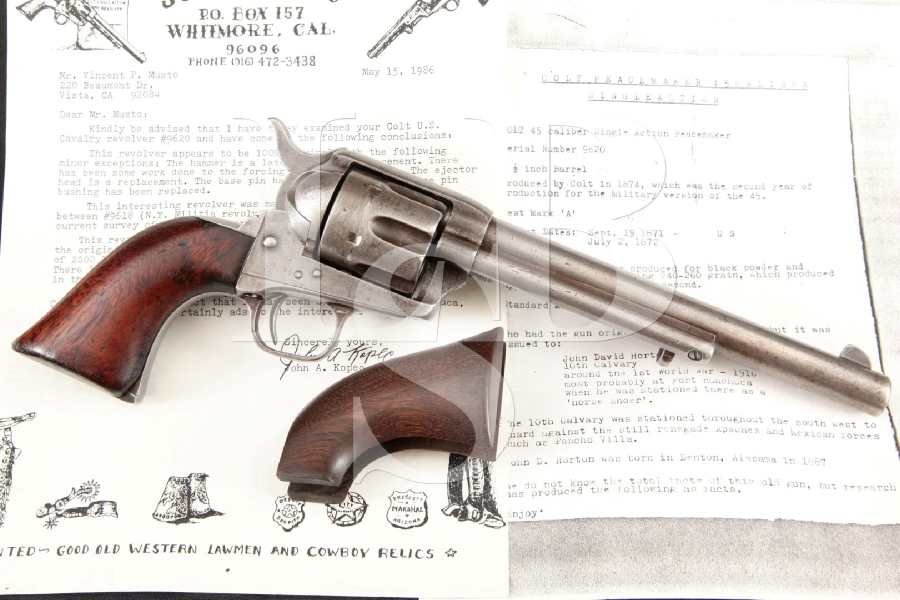 Year of Manufacture: Page 5 of Graham, Kopec & Moore’s ‘A Study of the Colt Single Action Army Revolver’ puts the shipment date from Colt’s factory on 6-8-1874, John Kopec’s included letter concurs that the item was in a 2,000 unit extension order from the original 8,000 U.S. martially marked arms that were shipped out to cavalry units. The item would have been made before the fulfillment of the extension in August 15th of 1874.

Markings: The left side of the frame is marked “PAT. SEPT. 19. 1871. / JULY. 2. 1872″, next to “U.S.”, the underside has the serial number, found again on the underside of the barrel, underside of the trigger guard plate, cylinder and toe of the butt of the grip frame. The hammer cut is marked “C”. Ainsworth’s inspector mark “A” is found on top of the rear grip strap and underside of the trigger guard plate. The top of the barrel is marked “COLT’S P.T. F.A. MFG. CO. HARTFORD, CT. U.S.A.” The butt of the grip frame almost seems to read “CA” with a dropped “V”, though the markings are extremely faint, please see our pictures. The inside of the original grip’s markings are very faded but seem to correlate with the other serialized pats, Kopec’s evaluation did not list the grips as mismatched items, thus being orginal to the pistol, the inner strap looks to read “MIX”, hand carved. An extra grip is included, the butt has Ainsworth’s “A” mark, the left has an “OWA” cartouche, the stocks are noted as being Wally Francis made on the inside of the manila folder.

Sights / Optics: The front sight is a rounded quarter blade, fixed to the barrel. The rear sight is a “V” notch sitting before a “U” groove milled into the top strap.

Stock Configuration & Condition: The included grip is hand rubbed walnut with a few surface chip losses. The stock looks to have been sanded at some point, no longer bearing the inspector mark on the left. The flanks have heavier wear and there are some gaps in fit to the grip straps, there are no cracks visible. The grips rate in about Good to Very Good overall condition. A second grip is included, bearing an “A” inspector mark on the butt and “OWA” cartouche on the left. The stock is hand written with the serial number, though it looks to have been done in modern times, a note on the included paperwork folder indicates “Wally Francis”. The grip fits the grip straps exceptionally well and has only a few minor marks, rating in Excellent overall condition.

Finish Originality: The finishes are original, Kopec’s letter indicates that the hammer (1880’s replacement), ejector head, center pin and center pin bushing are not original, with another note that the barrel’s forcing cone had been worked a long time ago as well.

Bore Condition: The bore is mid gray with dark erosion sprinkled in the grooves; there is a nice sharp climb to the lands, the bore does have spots of mild to moderate pitting but the worst spots are very infrequent.

Overall Condition: The surfaces have mottled dark and mid brown patina, most areas have light erosion, none of the erosion is very deep. The underside of the barrel and ejector rod housing have dents on the surfaces that are obviously very old. The upper portion of the barrel has heavier wear, looking to be from prolonged holster draw. The grip frame and leading edges show honest wear from use and handling. It looks like the revolver was hand rubbed to keep it clean, given the lack of surface finish; it gives a lot of honesty to the piece. The screw heads are highly serviceable with light tooling at worst. The markings are clear unless otherwise noted. Overall, this handgun rates in about Very Good condition.

Mechanics: The action functions correctly. The cylinder produces mild side to side play with a strong mainspring and crisp trigger pull, we did this testing with the utmost care. This is one of the better surviving Ainsworth actions that have come through the shop. We did not fire this handgun. As with all previously owned firearms, a thorough cleaning may be necessary to meet your maintenance standards.

Box, Paperwork & Accessories: Single Action revolvers, especially Cavalry models in this early range, are commonly faked. It is estimated that there are more fakes on tables at shows then the real thing. John Kopec is a renowned expert and his verification letters are Standard in the industry. Included is a John A. Kopec evaluation of the handgun that described the gun in it’s current configuration. Also included is also an unknown origin photocopy of what looks to be a hand-typed letter, giving a rundown on the revolver’s markings, with a note that “Who had the gun originally, we do not know; but it was issued to: John David Horton 10th Cavalry around the 1st World War-1916 most probably at Fort Huachuca when he was stationed there as a ‘horse soldier”. This paperwork was included by the consignor, along with independent research which found additional information on Horton, his widow, who died near the fort, as well as research on a Judge Albert J. Mestemaker, who is on a 1987 sales receipt, included grip box, his obituary and a manila envelope with hand written notes.

Our Assessment: The Colt Single Action Army Model of 1873 was an instant success when introduced to the U.S. Army’s Cavalry units which were expanding America’s borders in the years following the American Civil War. This revolver was made in the second year of production; according to the included Kopec letter, “This interesting revolver was manufactured in 1874. It falls between #9618 (N.Y. Militia Revolver) and #9622 (Artillery) in our current survey of these revolvers. This revolver was undoubtedly part of the first extension to the original government contract of 8,000, and was part of 2000 like revolver which were completed on August 15th, 1874. There is little doubt that a revolver such as this has seen service in the Indian Wars with the United States Cavalry” An additional piece of documentation is included, with a note that military history records indicate John David Horton of the 10th Cavalry (Buffalo Soldiers) was issued this pistol sometime around the First World War. Additional independent consignor research is included in the auction. While the included photo copy of an old document cannot be verified 100% to historically link the later soldier to whom this may have been issued, it remains a highly captivating piece. This is one of the most beautiful and honestly worn Early Ainsworth revolvers we have had the honor of handling. For any type of collection, nothing turns heads like a 4-digit SAA. All Single Action Army Colt revolvers are collectible, be it the 1st, 2nd or 3rd generations, just to varying degrees. Few specimens have made it through time in functioning order, especially given the high risk of being damaged or lost in combat. This one is so full of history it almost baffles us, it will never be a less interesting item and will always be a sound investment. You cannot put a value on American history but you can at least start by owning it. Please see our pictures and good luck.