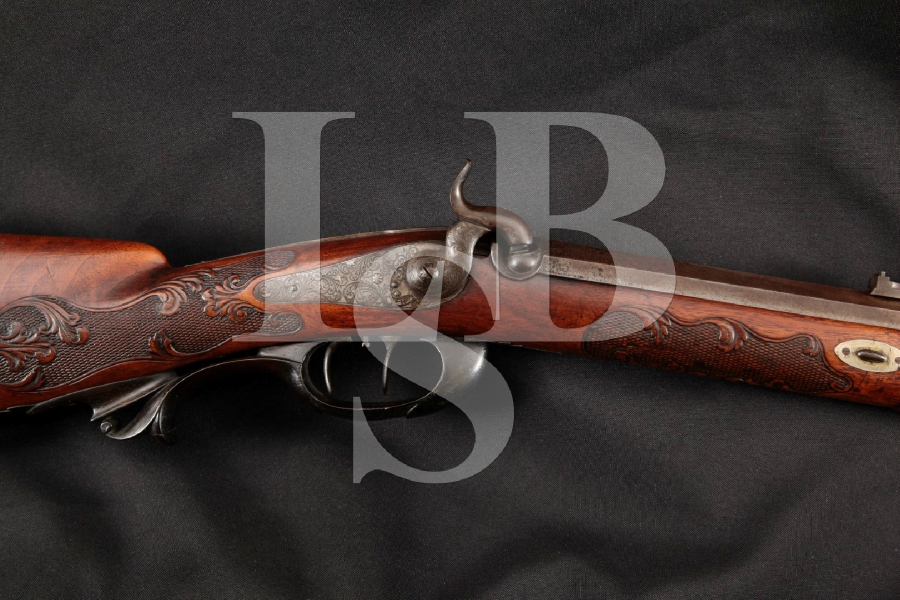 Year of Manufacture: Percussion firearms were at their peak of popularity in the 1850’s, the rifle definitely seems to be from about that period. We were unable to find any information on Carl Hartung.

Markings: The top of the barrel is marked “CARL HARTUNG”, appearing to be silver-filled and beautifully fit to the metal. The barrel, upper tang, lock and plate have scroll engraving. The forend features a lion’s head, at the ram rod entrance. The wood has other beautifully carved floriate and scroll themed carvings which have high relief and sharp form, please see our pictures.

Stock Configuration & Condition: The stock is full length with a finely fit polished ox horn nose cap, two ram rod loops, beautiful carvings and a large sling post in the belly. The left of the butt has a large cheek piece, the right has a patch box. The forward sling swivel bar is missing with chip losses around the holes. There are a few other small chip losses around the upper tang. The trigger guard is a one piece polished ox horn item with a swooping finger notch tang, the fit to metal is generally crisp, there are small chip losses around the base. The wood has shallow scrapes from about the trigger guard area back, almost looking like sanding but upon closer inspection, appearing to be more like pressure marks. Some deeper dark gouges are seen near the butt portions. The forend tip is cracked but holds strong to the rest of the stock. The LOP measures 12 5/8” from the front of the rear trigger and 13 5/8″ from the front of the forward trigger to the back of the smooth black polished bone butt plate. The plate and sliding patch box door align well, there is a slight gap between the stock and plate, the plate is currently fully tightened down. The surfaces of the butt plate have gouges and scrapes, in Very Good condition. The stock rates in about Very Good overall condition.

Type of Finish: The barrel has silver inlaid “CARL HARTUNG”, the other surfaces appear to have been left in the white, no finish remains to be certain.

Bore Condition: The bore is dark with deep and highly formed 12-groove rifling. There is mild erosion throughout the bore. We believe some areas can be removed with a long term soaking solution.

Overall Condition: The surfaces have beautiful brown patina with scattered spots of surface erosion. The barrel has dings near the breech area. There is pitting around the nipple and hammer, which has a dark cocoa patina. The chamber ring almost looks to have been blued at one point. The screw heads are generally well formed with light tooling in the slots, the butt plate screw slots are shallow. The markings are crisp. Overall, this rifle rates in about Very Good Plus to Fine condition for its age.

Mechanics: The action functions correctly. The rifle has a double set trigger, which results in a 1lb 3oz trigger pull with the rear trigger set. The rifle weighs 6lbs 3oz. We have not fired this rifle. As with all previously owned firearms, a thorough cleaning may be necessary to meet your maintenance standards.

Box, Paperwork & Accessories: A brass tipped ram rod is included, the wood is strong, the brass has tarnish but fits very well, the item is in Fine condition.

Our Assessment: From http://firearmshistory.blogspot.com/2010/05/rifling-history.html “The inventor of a rifled barrel is alleged to be one of two inventors, both of them German-speaking. According to The Gun and its Development, one was Gaspard Kollner of Vienna, sometime in the 15th century, others allege that his grooves were straight in nature and the first spiral grooves came from Augustus Kotter of Nuremberg in 1520. Regardless, a lot of the early rifling development came from German speaking areas. The Germans already had a history of manufacturing crossbows that would spin their bolts in flight (either by shaping the arrow head, arranging the feathers of the arrow slightly off center, or by passing the arrow through a tube with grooves in it to impart spin), so they were aware of the basics of rifling and its benefits, even before they started manufacturing firearms. So while the British military took until the 1850s to start issuing rifles to their forces (British troops used the venerable Brown Bess smoothbore musket for a very long time), the forces of the Landgraf of Hesse were already using rifled weapons by 1631 and Maximilian I, Elector of Bavaria, had several troops using rifled arquebuses by 1640. In the early days, most infantry commanders of other countries did not like rifling because it was harder to clean gunpowder recidue which got into the grooves.” This rifle is wonderfully crafted in the Jaeger tradition, this one certainly oozes nobility and would have been quite a handy piece. It is light enough to carry comfortably for miles on end and with a .59 caliber bore, large game could be had. We do not see many items from the mid 1800’s come through in this condition. It is bound to have an incredible past and will continue to impress for generations.