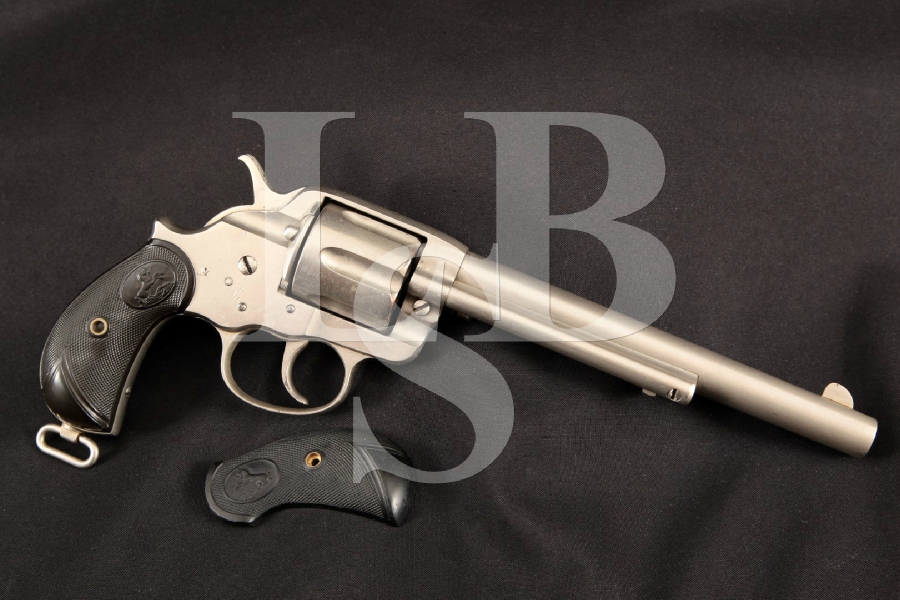 We have taken another look at this revolver and believe its finish is original or at least old enough to have been with the revolver for most of its life. Please see our pictures, the markings are crisp and the metal to metal fit is flush. We have the factory letter on this pistol. This pistol is from the collection of award-winning gun writer and NRA Field Editor Rick Hacker. This pistol shipped November 27, 1896 to Simmons Hardware Co. There is an additional picture of the letter at the end of the auction, it reflects a 7 1/2″ barrel and nickel finish.

Sights / Optics: The front sight is a quarter-round blade fixed to the barrel. The rear sight is a “V” groove in the top strap.

Stock Configuration & Condition: The grips are black hard rubber with embossed Rampant Logo in oval on the upper portions, surrounded by checkering; the panels fit the birdshead grip frame well but for at the left panel where there is a larger chip loss. The other surfaces have faint compression and rub marks. The grips are in about Good to Very Good condition.

Type of Finish: The revolver is Factory Shipped nickel plated.

Finish Originality: We believe the finish is original.

Bore Condition: The bore is dark, the rifling is worn but still defined. There are dark spots that appear to be surface oxidation; we were able to improve the bore to its current condition and should continue to improve with a prolonged cleaning session.

Overall Condition: This revolver retains about 80% of its current metal finish. The front of the cylinder and underside of the trigger show rubbing past the nickel plate to copper plating. The surfaces of the frame have heavy dings and scrapes. The trigger guard is brighter underneath than in the other areas. The surfaces have attained natural milky tones that have settled on most surfaces. The center pin has marring, seen also on the underside of the barrel. The overall form and metal to metal fit on the revolver is very tight, though the left side plate has scraping and looks to have been removed at some point. Please see our pictures. We were unable to remove the center pin, a through soaking may remedy this. The screw heads are moderately tooled. The markings are clear. Overall, this revolver rates in about Very Good Plus to Fine condition.

Mechanics: The action functions properly. The cylinder produces solid lockup on 3 chambers and only light play on the other three. The single action pull is smooth, the double action is a tad heavy. The mainspring looks to be a replacement, please see our pictures. The hammer has ¼ and ½ cock safety positions. We did not fire this revolver.

Box, Paperwork & Accessories: Included is a black hard rubber left grip panel that is slightly gray in tone compared to the installed grips. There is rubbing wear and a few pecks into the surfaces, the grip is in Very Good condition. This revolver comes with the factory letter addressed to award-winning gun writer and NRA Field Editor Rick Hacker.

Our Assessment: This is a Model 1878 Frontier Double Action in .45 Colt, used primarily in the Model 1873 pistol that proved to be a great match. The 1878 was Colt’s first large frame double action revolver and though it did not become a military sidearm, it was accepted openly in the civilian market. This revolver appears to have its original finish and still looks great. There is some honest handling marks from use, the pistol was probably quite a sight to behold in the mid 1890’s, with a 7 1/2″ barrel and ability to spit out lead without manually cocking the firearm beforehand. There are dozens of Colt revolvers to collect between blackpowder, smokeless, civilian, military, etc. making it almost impossible for the collector to obtain one of each, and making all of them desirable. This one, with the factory letter, will make for a grand entry to your collection.