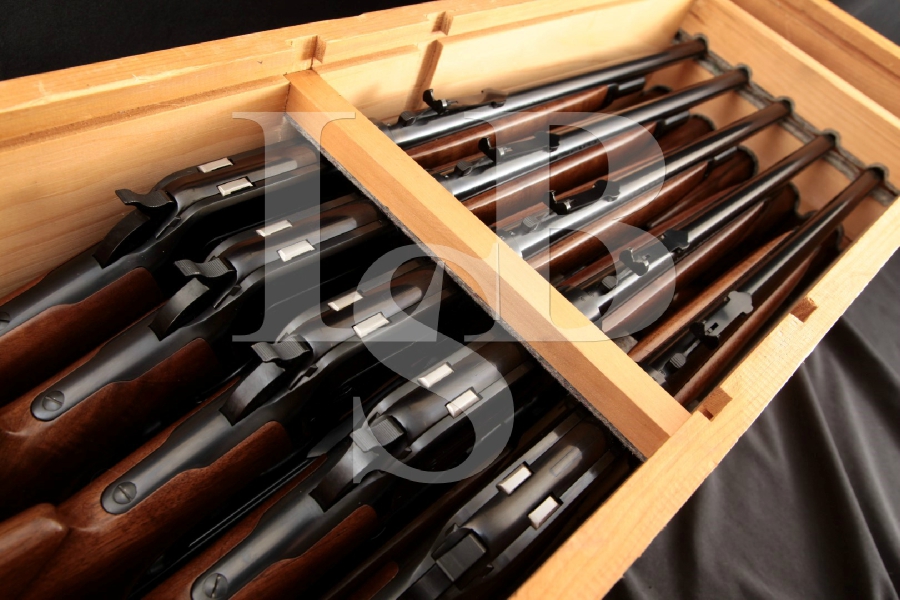 Make: These carbines were made by Miroku of Japan for Browning.

Barrel Length: The barrel is 20” in length.

Stock Configuration & Condition: The stocks are two piece smooth walnut with a satin finish. The buttstock has a pistol grip and a checkered black plastic shotgun style buttplate. The forend has a blued steel nosecap with the tubular magazine protruding about 2” past the front of the nosecap. There is a tiny ding on the left side of the lower tang on S/N 03328 and a light handling mark near the front of the comb on the left side on S/N 03327. Otherwise, the stocks show no marks and are in Excellent condition. The LOP measures 13 ¼” from the front of the trigger to the back of the buttplate. The buttplates shows no handling marks and the checkering is sharp. The stocks rate in about Mint overall condition.

Type of Finish: The finish is a high luster black bluing. The locking bolts are “In The White”.

Bore Condition: The bores are bright and the rifling is sharp. There is no erosion in nine of the bore. S/N 03330 has a few spots of very light erosion near the muzzle. There are no marks in the bore or on the front face of the bolts to indicate these rifles have ever been fired outside the factory.

Overall Condition: All rifles retain about 99+% of their metal finish. The rifles all have a light mark on the lower tang where the lever rubs. S/N 03325 also has a light mark on the outside rear surface of the lever. The screw heads are sharp and the markings are clear. Overall, these rifles rate in about Mint condition.

Mechanics: The actions function correctly. The hammers have a quarter-cock safety position. We did not fire these rifles. As with all firearms, a thorough cleaning may be necessary to meet your maintenance standards.

Box, Paperwork & Accessories: A pine crate for storing the rifles is included. The end panels are both marked with a Browning Buck Mark logo in red and with “10 / BROWNING / CARBINES / MODEL 71 / 348 WIN.”. The crate provides storage of 10 carbines in two rows of five, with padded dividers to protect the surfaces. A clear Plexiglas cover is made to slide in and out of one end of the crate for ease of accessibility. The crate shows several handling marks and is in about Very Good to Fine condition. Please see our pictures.

Our Assessment: This auction is for a lot of ten, consecutively serial numbered limited edition Browning Model 71 lever action carbines made by Miroku of Japan based on the earlier Winchester Model 71. The Browning Model 71 was made for two years only, 1986 and 1987, with 7000 carbines (4000 Grade I and 3000 High Grade) and 6000 rifles produced. The Model 71 was an improved Model 1886: it replaced the original leaf mainspring with a more durable coil spring and the rifle was made from Winchester Proof Steel, which was longer wearing and took a better blued finish than the earlier nickel steel used in the Model 1886. The Model 71 was not named after a date, but was simply the next model introduced after the bolt action Model 70. Like the Winchester M71, the Browning is also chambered in .348 Winchester, first introduced for the Winchester M71 in 1936. The .348 Win. is one of the most powerful rimmed rounds ever used in a lever rifle. For elk and black bear, the 250 gr. loading produces over 3000 ft-lbs of muzzle energy, and for deer, the 150 gr. loading exits the barrel at about 2890 ft/sec, a quite respectable velocity. These carbines are the Grade I variant with dark blued metal and smooth satin finished walnut stocks. These carbines come in a Browning 10 rifle crate, with the carbines stored in two rows of five. The carbines appear unfired, and are in Mint condition. They show a few light storage marks, and one has a few light spots of erosion in its bore near its muzzle. For all you collectors that missed your chance to get a new, unfired, Model 71 when they were issued in the 80’s, this is your opportunity to pick-up ten of them, consecutively serial numbered, in their factory crate. You aren’t going to get another chance like this one, especially with only 4000 of this variant having been made, so don’t let these beautiful carbines slip through your fingers. The photo set includes the most worn of the 10 rifles, as described in the write up as an example. If any other pictures are needed, please feel free to reach out.