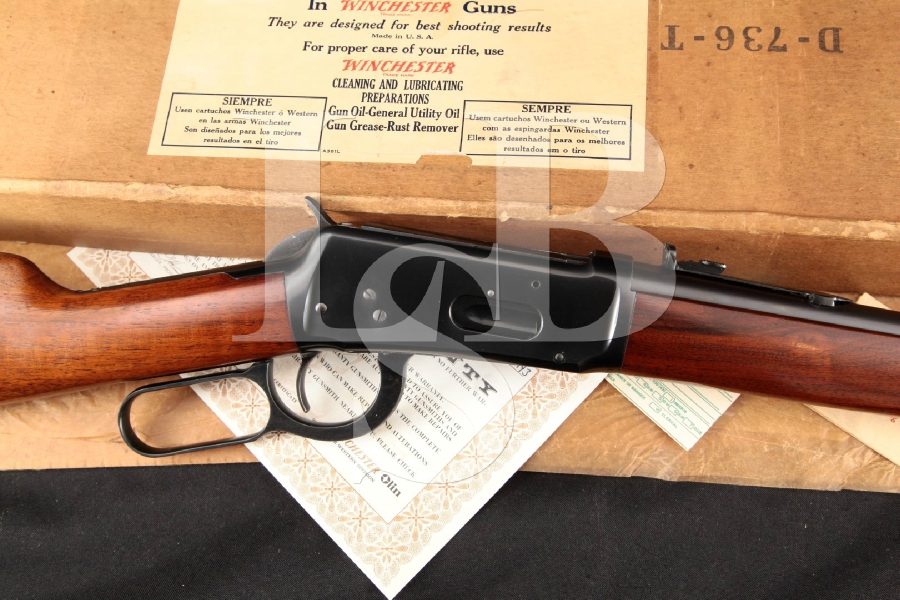 Sights / Optics: The front sight is a beaded blade, dovetailed onto a matted ramp base, covered with a blue steel sight hood. The rear sight is a “U” notched leaf that is set for micro-elevation adjustment, set in a slide step elevator base, which is dovetailed onto the barrel.

Stock Configuration & Condition: The stocks are beautiful smooth walnut with excellent tone and grain. The left of the forend has a shallow scrape before the barrel band, the underside has small bruises on the tip underside. The butt stock has a strait wrist and has only light marks at the toe. The stocks have beautiful fit to the metal and are free of cracks and major damages. The LOP measures 13 1/8” from the front of the trigger to the back of the serrated blue steel shotgun-style butt plate. The butt plate has rub wear, a shift to brown patina with a few areas of pin prick erosion. This may have happened from storage, the butt plate was found resting on a wood block in its factory box, the wood may have dried out the metal too far; the plate is in Good condition. The stocks rate in about Excellent overall condition.

Bore Condition: The bore is bright and the rifling is sharp. Our bore gauge gave a M.E. of 0, showing little evidence, if any, outside of the factory. There is no erosion.

Overall Condition: This rifle retains about 92% of its metal finish. As previously mentioned, the butt plate has losses to its bluing. The muzzle and lever have surface etching and light frosting. The barrel band has tooling marks and a few shallow dings. The lower tang and hammer have small wear marks from operation; this said, the rifle does not have evidence of long term use, it is truly beautiful, please see our pictures. The screw heads are sharp. The markings are Clear. Overall, this rifle rates in about Fine Plus condition.

Box, Paperwork & Accessories: Included is the rifle’s original factory cardboard box, the end label reflects the serial number and configuration correctly. The box lid has two torn corners, the outer material shows stains and discoloration. The tray is fragile but is free of major damage, the box is in Good Plus to Very Good condition. A strip of factory wax paper is included, showing small tears, in Fine condition; also included is a serialized warranty card, ‘warning’ pamphlet, Hunting and Shooting Sportsmanship pamphlet and second warranty card (both dated for sale on 1-22-1943). All of these items are in Fine Plus to Excellent condition.

Our Assessment: Per Wikipedia; “The Winchester Model 1894 rifle (also known as the Winchester 94 or Win 94) is a lever-action repeating rifle that became one of the most famous and popular hunting rifles. It was designed by John Browning in 1894 and originally chambered to fire two metallic black powder cartridges, the .32-40 Winchester and .38-55 Winchester. It was the first rifle to chamber the smokeless powder round, the .30 WCF (Winchester Center Fire, in time becoming known as the .30-30). The 1894 was produced by the Winchester Repeating Arms Company through 1980 and then by U.S. Repeating Arms under the Winchester brand until they ceased manufacturing rifles in 2006. Reproductions are being made by the Miroku company of Japan and imported into the United States by the Browning Arms company of Morgan, Utah. The Model 1894 has been referred to as the “ultimate lever-action design” by firearms historians such as R. L. Wilson and Hal Herring. The Model 1894 is the rifle credited with the name “Winchester” being used to refer to all rifles of this type and was the first commercial sporting rifle to sell over 7,000,000 units.[1]” We have seen quite a few Winchester come through the shop, all catch the eye and have exceptional craftsmanship. The pre-1964 rifles are highly coveted for their fit and finish, this rifle is a prime example of what the company could do. The included warranty cards put the sale date in 1943, which we found interesting since the rifle was made in 1940; perhaps a G.I. that returned from the war was the only one in town in 1943 and decided to buy the lever gun that had been eyeing the sales associate for a stretch. With about 92% of its finish remaining, it is one of the higher condition 94’s that have come through within the past few years and is even more grand with its factory box and paperwork. Please see our pictures and good luck.