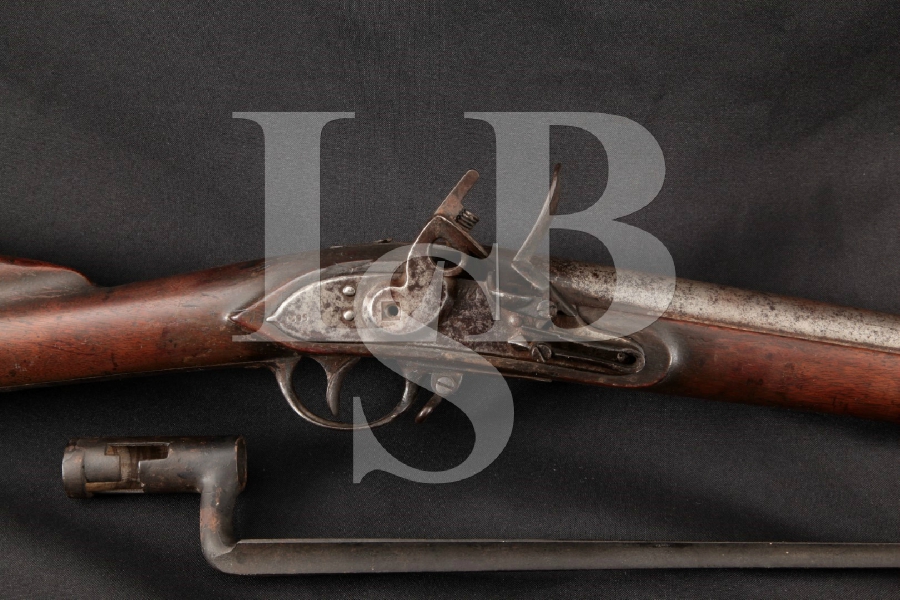 Make: The lock plate is marked “SPRINGFIELD” with an eagle, which is observed in Flayderman’s Guide on page 549 as being an unidentified maker.

Model: 1808 U.S. Musket Contract Model, Based on the French Charleville

Markings: The chamber area of the barrel is marked “P / V” with an eagle’s head. The lock plate is marked “US” in cursive, an eagle and “SPRINGFIELD”. The left of the stock is hand carved “CD / DELAWARE”. The butt plate and rear of the lock plate have date “1909”.

Sights / Optics: The front sight is a rounded half-moon brass blade, that is integral to the forward barrel band, there is no rear sight.

Stock Configuration & Condition: The stock is American walnut, with three barrel bands, nearly full length of the barrel. The middle band has a sling swivel, the rear swivel is mounted on the trigger guard plate, the stock comes back to form a strait wrist that flutes into the comb of the butt, much like a Brown Bess. The stock has chip losses on the upper portion by the upper tang, there are a few other small losses, the surfaces have gouges and scattered scrapes, indicative of military arms of this age. The LOP measures 12 1/2” from the front of the trigger to the back of the metal butt plate, please see our pictures. The stock is in Good to Very Good condition.

Type of Finish: The barrel is browned, the bands are unfinished iron, the lock plate may have been case colored but no finish remains to be sure.

Finish Originality: The surfaces are original.

Bore Condition: The smooth bore is dark and there is moderate erosion and pitting the length of the bore.

Overall Condition: The surfaces generally show scabs of erosion, pitting and general handling marks. The barrel has a nice sheen for its age, the hammer does not have its top flint block or screw head. The muzzle has heavy erosion, seen again on the outer surfaces before the front barrel ring. The screw slots range from mildly tooled to disfigured. The markings are faded. Overall, this rifle rates in about Fair Plus to Good condition for its age.

Mechanics: The frizzen and lock were completely stuck when we got this rifle, a soaking freed them up a small amount, though the trigger is very heavy. A thorough disassembly and cleaning may produce a nice action, the hammer spring is still strong. We have not fired this rifle. As with all previously owned firearms, a thorough cleaning may be necessary to meet your maintenance standards.

Box, Paperwork & Accessories: The included Pattern 1807 bayonet is marked “US / JC” on the blade, which is 16″ in length to the neck, the surfaces have scabs of erosion and general bruise marks, the edges have dings and the tip is rounded, the bayonet gets stuck before being able to lock into place on the barrel, perhaps from erosion on the barrel aft of the muzzle. The bayonet is in Good Plus condition. No ram rod is included.

Our Assessment: The 1808 came to be when the U.S. government saw war with European powers as inevitable, this rifle harkens to France’s earlier Charleville flintlock rifles, the overall design is rugged and could take a beating, which would be necessary throughout the War of 1812. This rifle looks to have had an interesting life, we wouldn’t be surprised if it saw service in 1812 and in subsequent conflicts; how it came to Southern California in 2017 is anyone’s guess, the stock is carved CD Delaware, giving it a unique touch. We see many flintlocks come through, this model is a bit more scarce and has Springfield / eagle markings. With the period correct 1807 Pattern bayonet, it is certainly a good find.