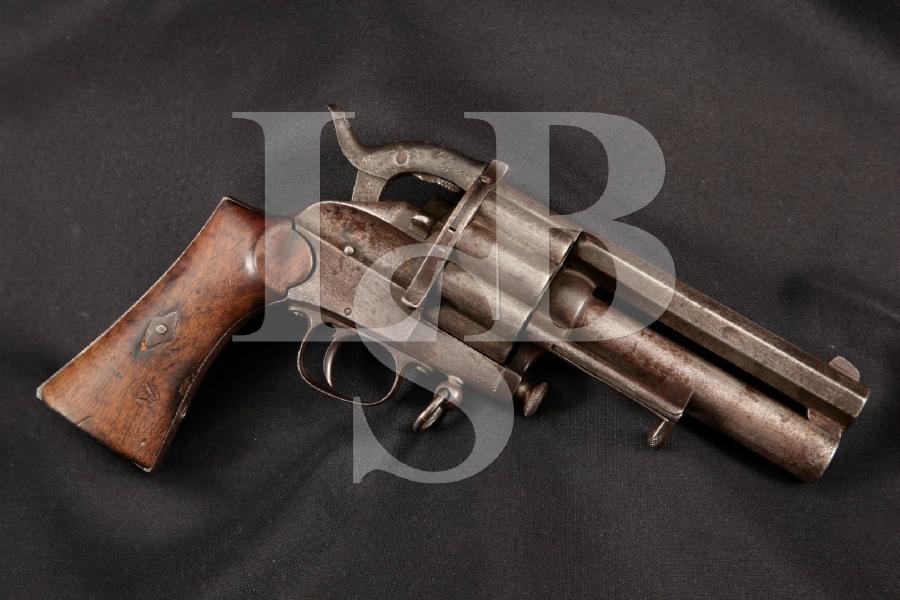 Make: There are no makers marks present, the pistol was made in Belgium on the commercial market.

Year of Manufacture: The proof mark indicates production up to 1893, this pistol was most likely made in the 1870’s given the low serial number.

Markings: The rear of the cylinder is marked “E/LG” in oval and “4”, which is also found on some of the internal smaller components under the left side plate. The right of the frame is marked “284”, the left of the grip frame is marked “5”.

Sights / Optics: The front sight is a triangular blade, dovetailed onto the barrel. The rear sight is a “V” notch on a rise in the frame.

Stock Configuration & Condition: The grips are beautiful European walnut with nice burled grain. The stocks have some gaps in fit to the grip frame, they may have been sanded at some point. There are chip losses on the front of the right panel, the other areas have scattered gouge and scrape marks. There are no cracks or major damages. The grips rate in about Fair to Good overall condition.

Type of Finish: In the White

Bore Condition: The bores are dark, the pistol barrel’s rifling is still highly defined, we were able to clean it out enough to see a reflective surface in some areas, the balance of the surfaces have moderate erosion. The shotgun barrel has scabs of erosion and pitting.

Overall Condition: The surfaces were left in the bright from the factory, there is moderate erosion and dark patina throughout, along with small dings and a few scrapes. The metal tells us that the item has not been cleaned or refinished. The overall construction is solid and the lines are generally well defined. The screw heads are disfigured in most cases, though we suspect all could be serviceable. The markings are clear. Overall, this handgun rates in about Good condition for its age.

Mechanics: The action functions correctly. The revolver is loaded with a right side loading gate, the shotgun barrel is breech loaded with a flip-up gate that houses the firing pin. The hammer can be selected for the pistol or shotgun barrel, found as a flip-down hammer within the hammer. The cylinder skips chamber to chamber by hand in full lockup. We did not fire this handgun. As with all used firearms, a thorough cleaning may be necessary to meet your maintenance requirements.

Our Assessment: From https://en.wikipedia.org/wiki/LeMat_Revolver “The LeMat revolver was manufactured from 1856 to 1865, with approximately 2,900 being produced. The first models were manufactured by John Krider of Philadelphia, with the second model (the first overseas model) being produced by Charles Frederic Girard and Son of Paris. Quality concerns prompted LeMat to consider production at the Birmingham Small Arms Company in Birmingham, England, but production was never mounted there. LeMat revolvers from France were shipped to the Confederate forces via the United Kingdom, and all firearms landed in the UK were (and still are) required to be proofed. The LeMats which found their way through the Union blockade were stamped with British proof marks from the Birmingham Proof House, leading to the misapprehension that the pistols were actually manufactured in the UK. A handful are known to have been made illegitimately in the UK by an unknown manufacturer, believed to be the London Armoury Company, but only two examples survive to the present day and it is doubtful any of the English-made LeMats ever saw service during the U.S. Civil War.[7] The original revolver, constructed of blued steel with grips of checkered walnut, was not considered to be a very accurate weapon although it was deadly at close range. Civil War cavalrymen, particularly in the South, preferred to carry several pistols, as it was faster to draw another loaded weapon than it was to try to reload a cap and ball revolver in combat.” This pistol is an improvement to counter the daunting task of reloading while taking fire. This 1869 variant is breech loaded with a 9 shot cylinder. This beefy revolver would have belonged to someone who really needed a lot of firepower, they were popular throughout Europe until the double action revolvers dominated the scene. This item definitely looks to have seen some use and is old enough to have perhaps taken part of the Franco-Prussian War. If you are familiar with the show West World, it is used by Ed Harrison’s character who demonstrates thoroughly what this revolver can do. Please see our pictures and good luck.