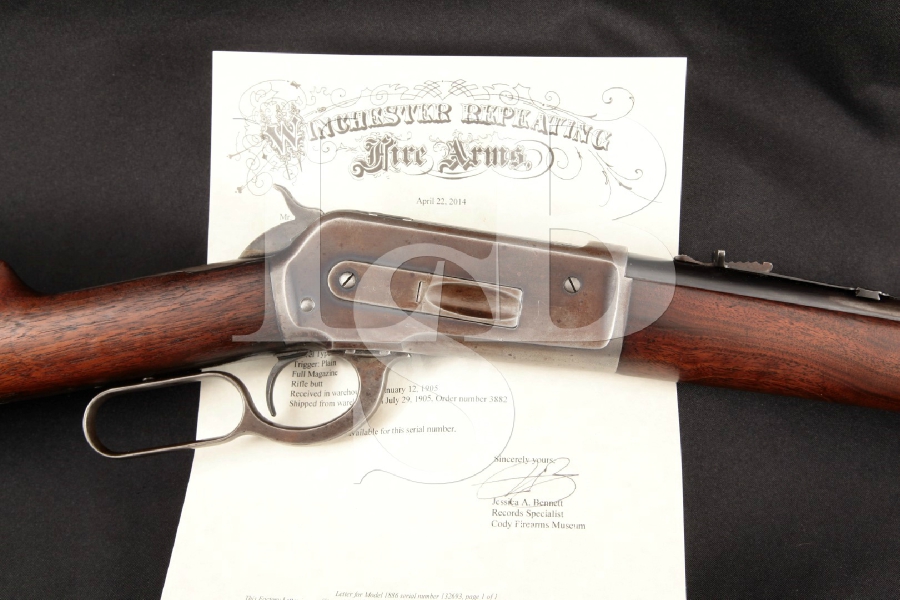 Stock Configuration & Condition: The stocks are beautiful walnut items with near perfect fit to the metal items, including the butt stock and forend nose cap. The grain swirls on the forend and has horizontal play on the butt stock. The forend has small scattered marks, some of which are mild in depth. The butt stock has a series of wide stape compression marks with subsequent holes, telling us this rifle probably had a butt cover installed at some point. The surfaces have scattered scrape and divot marks, no cracks are seen on either stock. The LOP measures 13 1/4” from the front of the trigger to the back of the curved metal butt plate; the plate no longer shows finish, with some scrape and compression marks, some areas of surface oxidation have formed, the plate is in about Very Good condition. The stocks rate in about Very Good Plus to Fine overall condition.

Bore Condition: The bore is bright with sharp rifling and no erosion, this is one of the best 110+ year old bores we’ve seen yet.

Overall Condition: Strong bluing remains on the barrel, on the lower flanks, the magazine tube and rear of the barrel show deep blue and scattered marks. The exposed metal of the barrel has an honest browned patina and its wear patterns hint at scabbard use. The sights have rub wear to exposed metal, a few small marks are found. The top of the bolt has nearly all of its finish remaining, the receiver’s finish was rubbed to bare metal with rings of blue left around the screw heads. A notable ding is found on the magazine tube near the cap, a ding on the left of the forend cap and dotted scrape line on the left of the receiver are noted as well. The upper tang has a few drag marks with handling rub wear, seen also on the lever. The screw heads are sharp with light tooling at worst. The markings are clear. Overall, this rifle rates in about Very Good Plus to Fine condition.

Mechanics: The action functions correctly, the internals still have rigid mechanical operation with a solid lockup. The hammer rests at quarter cock and locks firmly in full cock, the trigger is crisp and effortless. We have not fired this rifle. As with all previously owned firearms, a thorough cleaning may be necessary to meet your maintenance standards.

Box, Paperwork & Accessories: Included is a Winchester factory letter indicating an original .33 Winchester barrel chambering, the barrel was apparently replaced at Browning Bros. The letter is in Excellent condition.

Our Assessment: Winchester’s first attempt at a lever action rifle capable of handling a rifle cartridge was the Model 1876, which was a heavier framed version of the Model 1873. However, the toggle-link action used in the gun was still limited to short cartridges like the .40-60 and .45-60 Win. The Model 1886 was made to handle longer cartridges like the .45-70 Govt. and the .45-90 Win. and .50-110 Win. cartridges. The Model 1886 utilized a locked-bolt action that was much strong than the M1876, and some seem to think it is faster and smoother as well. The Winchester Model 1886 was touted as a lever action express model, capable of handling any of the North American game animals. The barrel is marked for sale at Browning Brothers in Ogden Utah (home of the inventor), giving us an idea of why the barrel does not match the factory letter; we’re pretty sure whoever bought this rifle wanted it switched to .45-70 Government instead of .33 Winchester, the barrel looks to have been with the rifle for most, if not all of its life. We also understand it was practice to re-barrel these from .33 to .45 prior to sale as the .45 caliber rifles were more desirable/saleable. Browning Bros Armory had a welcomed reception and long successful run up until the 1920’s; from http://www.vintagegunleather.com/company-marks/browningbros_history.html “The Browning Brothers Armory specialized in sporting goods and related items with locations in both Ogden Utah & Salt Lake City Utah. Although the main lines of sporting goods were firearms and accessories related, the company sold Bicycles, Golf Clubs and a full line of sporting goods. The Browning Bros Armory was different with respect to the fact they manufactured or contracted manufacturing and sold wholesale as well. The Browning Bros. Armory was considered as the largest sporting goods retailer in Ogden & Salt Lake City, Utah at the turn of the century. The Browning Bros. Armory was closed in 1926 after a 46 year long successful run in the State of Utah. The reasons for the closure are unclear at this time.” Insofar as 110 year old rifles go, this one’s action and bright, sharp bore is one of the better we’ve come across. With its unique markings and higher condition, serious Winchester collectors should take notice of this one. If it somehow slips past that crowd, it should still hit accurately to a distance.