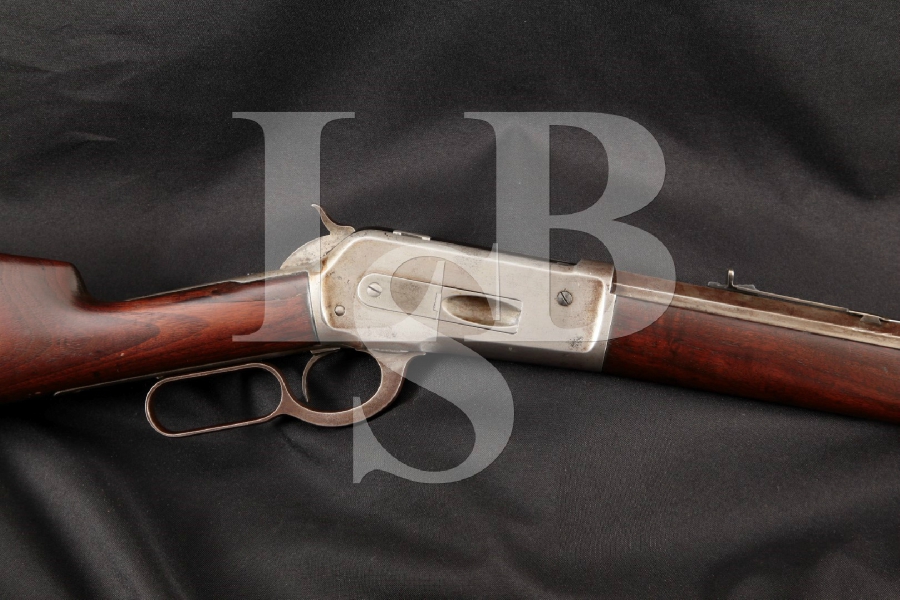 Markings: The top of the barrel is marked “MANUFACTURED BY THE / WINCHESTER REPEATING ARMS CO. NEW HAVEN, CONN. U.S.A.”, with “.45-90 W.C.F.” faintly stamped by the receiver, the underside of the barrel is marked “45-90” with “VP” in oval and hand etched “1887”; we are unsure why it is marked 1887, this may have been old stock at the factory and installed later on down the line or may have been a replacement at some point. The upper tang is marked “MODEL 1886”, the lower tang is marked with the serial number. The inside of the butt plate has “1887” hand etched into the surface, looking to be much younger than the “S/10” mark found at the toe; the number “10” is also seen on the left of the upper tang.

Barrel Length: The barrel is currently 20″, half round and half octagonal. The underside of the barrel has slots cut, we believe the original owner experimented with different magazine tube lengths given these marks, the magazine tube cap is currently sitting right at the round/octagonal transition. There is a chance the barrel was cut down at some point, though we cannot be 100% sure, please see our pictures.

Sights / Optics: The front sight is a beaded blade on a dovetailed base near the muzzle and the rear sight is a “U” notched leaf and slide-step elevator that is dovetailed onto the barrel.

Stock Configuration & Condition: The stocks are dark stained walnut that look to have been lightly sanded and refinished a long time ago. The forend has a metal nose cap, there is a chip loss and small crack on the right side just aft of the cap, the wood has a tiny gap in fit to being flush to the metal, also seen on the strait wrist of the butt stock at the tangs. The left of the wrist has a repaired crack, area of discolored wood followed by another un-repaired crack. The stock has some scrape and gouge marks as photographed. The LOP measures 13” from the front of the trigger to the back of the shotgun style metal butt plate, which is type 2 and no longer shows remaining finish; it has moderate erosion, in Fair to Good condition. The stocks rate in about Fair to Good overall condition.

Bore Condition: The bore is mid gray with spots of rising surface oxidation. A couple rings of pitting are found near the muzzle, the other surfaces have mild sprinkled erosion.

Overall Condition: The rifle has really nice blue left under the forend, completely free of rub wear or erosion, the other surfaces have mottled gray and brown erosion with light to moderate depth spots of erosion. The underside of the barrel has a crude channel down the middle, with two other cut slots, we believe these were other magazine tube lengths, set to accommodate the tube cap. The tube has some chip losses around the bases of the throats. The barrel may have been cut down at some point though the front sight’s entry to the barrel looks professional. The hammer is Type 2 and would have been appropriate for items in a higher serial number range. The magazine spring is very long and will probably cause problems when feeding rounds, this said, we do not recommend firing the rifle until it is cleared by a gunsmith. The screw heads range from light to heavily tooled with tool marks on most of the surrounding metal areas. The markings are clear. Overall, this rifle rates in about Fair Plus to Good condition.

Our Assessment: Winchester’s first attempt at a lever action rifle capable of handling a rifle cartridge was the Model 1876, which was a heavier framed version of the Model 1873. However, the toggle-link action used in the gun was still limited to short cartridges like the .40-60 and .45-60 Win. The Model 1886 was made to handle longer cartridges like the .45-70 Govt. and the .45-90 Win. and .50-110 Win. cartridges. The Model 1886 utilized a locked-bolt action that was much strong than the M1876, and some seem to think it is faster and smoother as well. The Winchester Model 1886 was touted as a lever action express model, capable of handling any of the North American game animals. This rifle has an interesting half octagonal, half round barrel and shortened tube magazine. It was made in 1892 and looks to have seen quite a bit of scabbard storage and handling. This said, the stocks are beautiful and we don’t see a Winchester like this come around very often. In .45-90 Winchester, it very well could have been someone’s favorite hunting rifle on the great plains, taking everything including buffalo. The cartridge is essentially a longer .45-70 Government, which can also feed through the rifle. This is a definite advantage for those traveling through country that was still occupied by U.S. troops using the same round for quelling native uprisings in the Indian-American war period. We wish this rifle could talk! Please see our pictures and good luck.