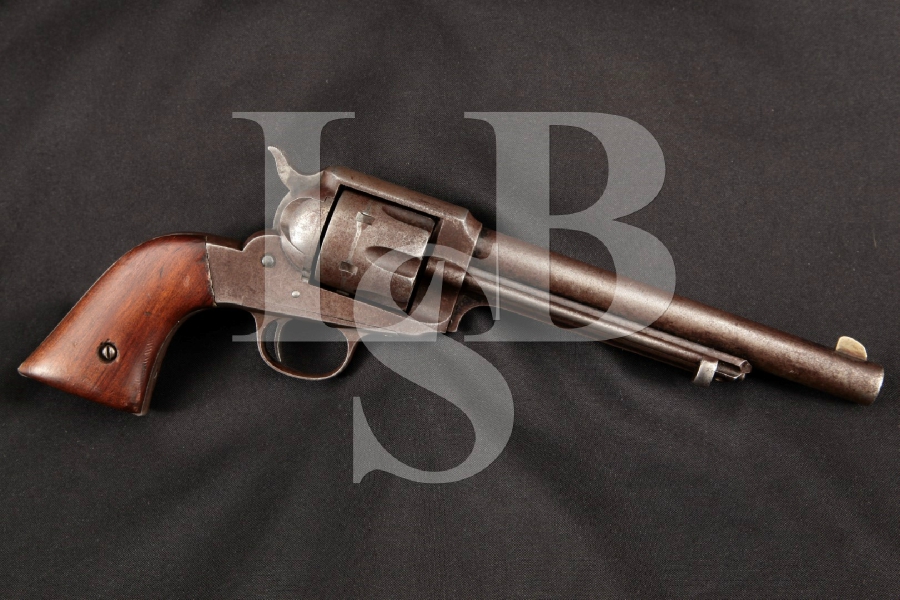 Markings: The top of the barrel is marked “REMINGTON ARMS CO. ILION, N.Y. U.S.A.”. The left of the grip frame has the serial number which is seen again on the back of the loading gate, the right is marked with inverted “D”, the left of the frame under the cylinder is marked “.44 C.F.W.”.

Sights / Optics: The front sight is a quarter-round German silver blade, fixed to the barrel, the rear sight is a “U” channel on top of the frame.

Stock Configuration & Condition: The grips are smooth walnut panels with brass escutcheons, Flayderman’s guide describes the panels as hard rubber, leading us to believe that these are later replacements. The fit to metal is generally good, though some of the edges are rounded before the grip straps. The items have scattered scrape and small gouge marks, please see our pictures. The grips rate in about Good overall condition.

Bore Condition: The bore is dark and the rifling is dull. There is moderate erosion and pitting in the bore.

Overall Condition: The handgun only shows blue finish on the rear of the barrel by the frame and underneath the ejector rod housing. The other surfaces have mottled patina, ranging from dark to silvered in tone. There is dark brown cocoa patina in scabs on some surfaces, which also show light erosion, please see our pictures. The screw for the ejector rod housing is missing, the lanyard ring is missing and the cylinder has a heavy drag line. General handling marks are seen in the photographs. The markings are faded, the screw head slots are light to moderately tooled. Overall the handgun is in Fair condition.
Mechanics: The action functions correctly. The cylinder produces about 1/8” side to side play with light back play. We did not fire this handgun. As with all used firearms, a thorough cleaning may be necessary to meet your maintenance requirements.

Our Assessment: From https://en.wikipedia.org/wiki/Remington_Model_1890 “The Remington Model 1890 New Model Army was a revolver by the Remington Arms. It was a based upon the successful Remington Model 1875 and the lesser known Model 1888 with both revolvers having the same size, appearance, and the removable cylinder. The 1890 Remington single-actions kept the solid frame and similar styling of the 1875 model, but lacking the large web under the ejector rod housing and equipped with checkered rubber grips. Like the 1875 model, the 1890 was suitably made for metallic cartridges, but only issued in .44-40 caliber.[2]” Holding a revolver of which only about 2,000 were made is chilling enough! The revolver politely hints at Colt’s design with some unique traits of its own, this pistol was made in the 3rd year of production, in which only 538 were produced. There are not any martial inspection marks but a revolver like this would have been a superior tool for protecting the homestead or riling up mischief. Please see our pictures and good luck.