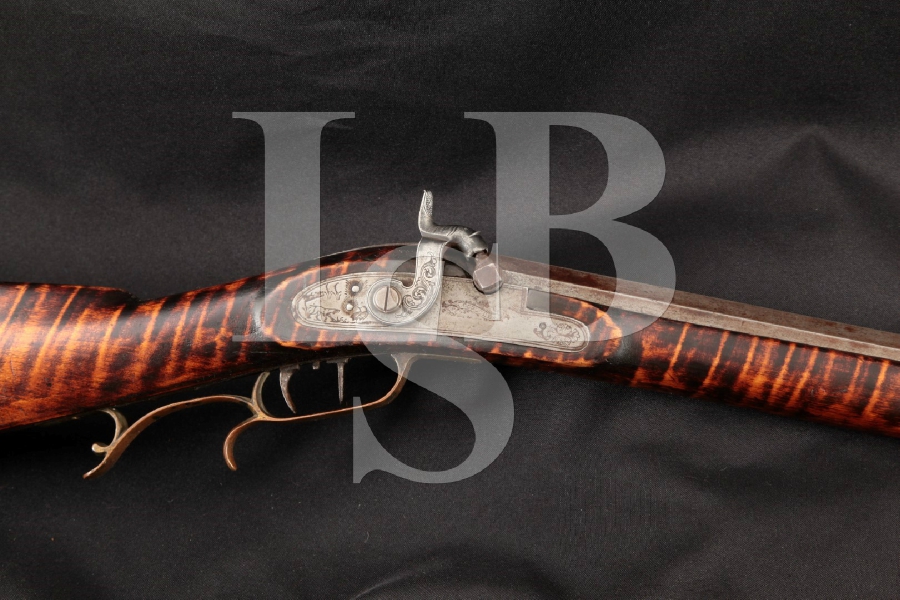 Make: The barrel is marked “J.AX”, which could be Joseph Ax, who is in Frank Seller’s American Gunsmiths, Page 22, from Ohio, who is recorded to have made Kentucky style rifles. The lock plate was made by Golcher.

Sights / Optics: The front sight is a beaded blade, integral to a base that is dovetailed onto the barrel in front of another dovetailed cut and the rear sight is a “V” notched leaf and slide step elevator with grooved finger tabs on the flanks, making for easy adjustment; the barrel under the elevator has a dovetailed cut in front of the deeper cut which houses the sight, looking to be a secondary placement, done a lone time ago.

Stock Configuration & Condition: The stock is beautiful hardwood with striped patterns, looking to have been formed with a heated coil of some sort, the wood and finish is of obvious vintage. The wood has nice fit to the lock plate and right side patch box. The stock covers about 1/3 of the barrel with a metal nose cap and two loops to house the wooden ram rod. The right side has a diamond shaped mother of pearl insert, the stock looks to have been stained and re-varnished a long time ago. There is a dark circular repair on the right of the comb, the right of the forend has a loss at the through-pin. The upper left of the forend and upper right at the upper tang have chip losses. The wood has scattered scrape marks but no major damages. The LOP measures 12 ¼” from the front of the rear trigger and 13 ½” from the front of the forward set trigger to the back of the crescent brass butt plate. The stock rates in about Very Good overall condition.

Type of Finish: A small amount of blue is on the hammer, the other surfaces no longer have finish and are in the white, the lock and plate may have been case colored.

Bore Condition: The bore is mid gray and the 7-groove rifling is still deep and defined. There is mild erosion with a few spots of pitting in the bore.

Overall Condition: The barrel’s surfaces have some deeper bruises and spots of dark surface erosion. There are horizontal lines indicating abrasive cleaning a long time ago. The hammer still has some discernible blue left, the engraving is still crisp. The lock plate and upper tang appear to have a very old varnish coating. We were able to clean the surfaces up a bit and we believe that with a thorough soaking, it should continue to improve the condition. The brass trigger guard, butt plate and toe piece have dark patina, indicating honest aging without cleaning. The screw heads are mostly strait with light buggering in some of the slots. The markings are clear. Overall, this rifle rates in about Very Good condition for its age.

Mechanics: The action functions correctly. With the rear trigger set, the front trigger breaks at only 3 OUNCES! The hammer’s mainspring is just south of strong but still puts the rifle in half-cock. We have not fired this rifle. As with all previously owned firearms, a thorough cleaning may be necessary to meet your maintenance standards.

Our Assessment: This is a beautiful mid 1800’s Long Rifle with 7-groove rifling in .36 caliber ball. The stock is absolutely beautiful and its double set trigger’s break is at an astounding 3oz. It looks like this rifle had some changes to the sights, a rear leaf elevator was installed at some point and the front sight’s high profile bead would have provided quite a bit more accuracy than the low profile offerings of the day. We see the name V.A. Fox on the barrel at the muzzle, which was probably the original owner, undoubtedly proud of his purchase. We found a Joseph Fox in Ohio who produced Kentucky rifles, in Holmes County. The Golcher lock, according to James B. Whisker’s research, had been made both in the UK and United States. This would have been a formidable piece of machinery that would have placed shots accurately enough to deserve the elevation adjustable rear sight. We can only imagine what this rifle’s life consisted of but it looks to have been taken care of enough to have been a cherished part of the collection. It should live on in the same manner and with some TLC, should look great again. As from Captain John G. W. Dillin’s The Kentucky Rifle, “From a flat bar of soft iron, hand forged into a gun barrel; laboriously bored and rifled with crude tools; fitted with a stock hewn from a maple tree in the neighboring forest; and supplied with a lock hammered to shape on the anvil; an unknown smith, in a shop long since silent, fashioned a rifle which changed the whole course of world history; made possible the settlement of a continent; and ultimately freed our country of foreign domination. Light in weight; graceful in line; economical in consumption of powder and lead; fatally precise; distinctly American; it sprang into immediate popularity; and for a hundred years was a model often slightly varied but never radically changed.”