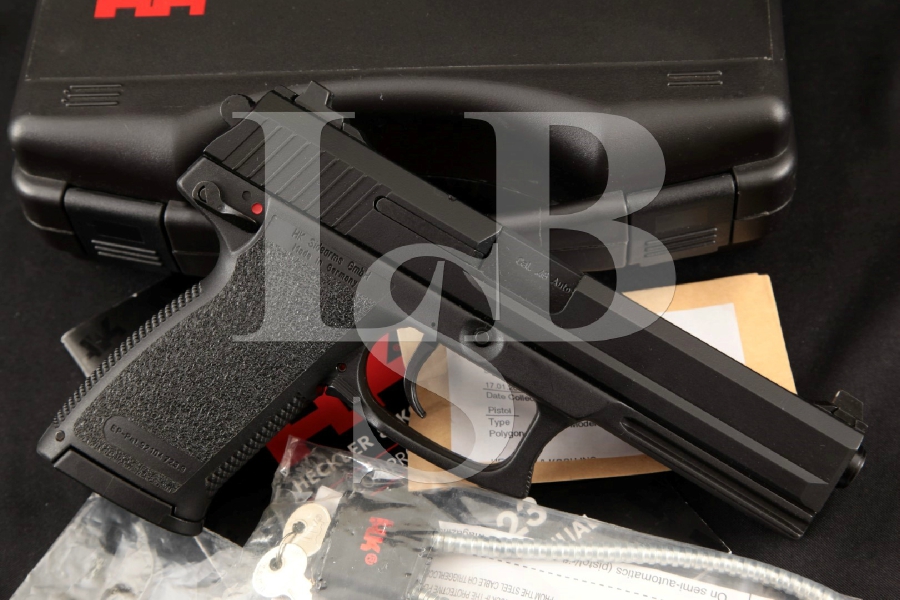 Markings: The left side of the slide has HK’s monogram logo and “MARK 23 / Cal. .45 Auto”, with an eagle over “N” nitro proof, the date code, an Ulm antler and the serial number. The barrel, visible through the ejection port, is marked “Cal. 45 Auto”. The left flank of the grip frame is marked “HK .45”, the upper right hand of the frame is marked “HK Sidearms GmbH / Made in Germany”, the lower right flank is marked “EP PAT 92 104 723.9” the underside of the trigger guard is marked “WARNING / REFER TO OWNER’S MANUAL”, the underside of the frame has a metal plaque with the serial number and “HKI TRUSSVILLE, AL”.

Barrel Length: 5.87″, the barrel does NOT have threads like the usual Model Mark 23 barrel would have, it looks like the barrel was professionally shortened, please see our pictures.

Sights / Optics: The front sight is a Patridge blade with a white dot on the rear face, dovetailed onto the slide. The rear sight is a square notched base with two white dots.

Stock Configuration & Condition: The grips are integral to the frame; the flanks are textured, the fore and back straps are checkered. The trigger guard is extended with a serrated front face, which is curved for added grip. The frame is free of notable marks. The frame rates in about Excellent overall condition.

Bore Condition: The bore is bright and the polygonal rifling is highly defined. There is no erosion in the bore.

Overall Condition: This handgun retains about 99+% of its metal finish. There is very little evidence that this pistol has been shot outside of the factory. All lines are crisp and the finish is applied with depth. The markings are crisp. Overall, this handgun rates in about Excellent to Mint condition.

Mechanics: The action functions correctly. The pistol has an intentionally heavier double action pull and a crisp, short single action pull. The pistol has an ambidextrous thumb safety and left side frame mounted decocker. The underside of the trigger guard has an ambidextrous magazine release. The frame is mounted with a slotted rail for lights or laser mounting (not included). We did not fire this handgun. As with all used firearms, a thorough cleaning may be necessary to meet your maintenance standards.

Our Assessment: From https://en.wikipedia.org/wiki/Heckler_%26_Koch_Mark_23 “The Heckler & Koch MK 23, MK 23 MOD 0, Mark 23, or USSOCOM MARK 23, is a semi-automatic large-frame pistol chambered in .45 ACP. designed specifically to be an offensive pistol. The USSOCOM version of the MK23 came paired with a laser aiming module (LAM), and suppressor. The USSOCOM MK23 was adopted by the United States Special Operations Command (USSOCOM) for special operations units beating out the nearest competitor, Colt’s OHWS. Development of the pistol began in 1991 as special operations representatives identified the need for an “Offensive Handgun Weapons System—Special Operations Peculiar”, and delivery of the pistol’s began in May 1996 to the special operation units.[4][5][6] While the USSOCOM MK23 designation usually applies to the complete system, it is also commonly used in reference to the pistol component alone. The LAM and suppressor were developed by Insight Technology and Knight’s Armament Company (KAC), respectively. The civilian version of the Mk23 sold by itself is designated the Mark 23.[7]” Heckler & Koch’s firearms are far and beyond some of the most durable and visually appealing of their kind. This beefy Mark 23 is simply intimidating and the trigger is outstanding in single action with a short reset. The 23 should make for a supremely accurate platform in which its .45 ACP chambering will certainly match well. If the special forces are down to carry a MK23, it’s good enough for me! Please see our pictures and good luck.