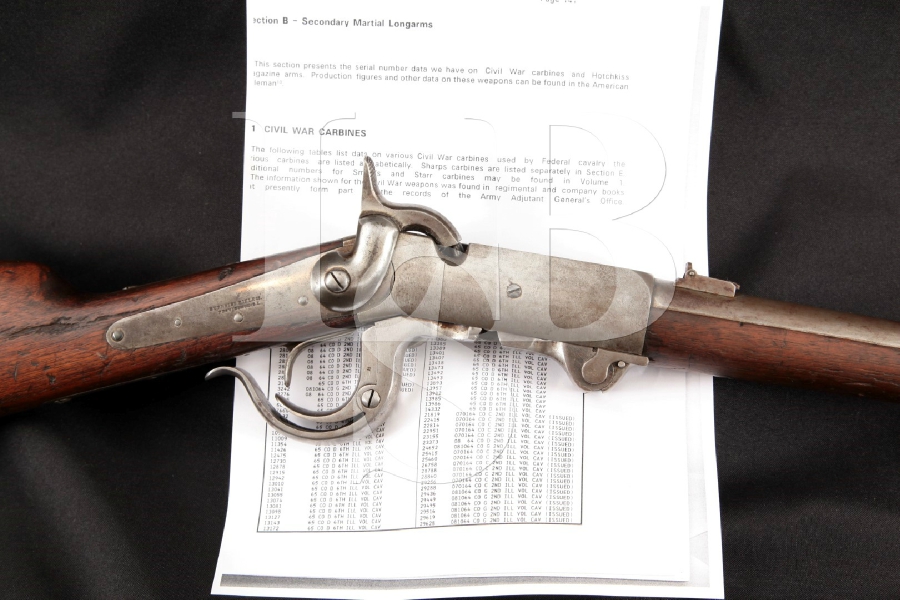 Year of Manufacture: Page 141 of Springfield Research Service of U.S. Martial Arms shows rifles up to 14332 issued in 1865, however serial number 21819 was issued July 01, 1864 in a large serial number range that was issued to the 6th Illinois Volunteer Cavalry. A copy of this page is included.

Markings: The lock plate is marked “BURNSIDE RIFLE CO. / PROVIDENCE RI”, the right of the lever release latch is marked “H”, which is also found again on the roll over tang of the butt plate, the left of the breech block is marked “S” twice. The top of the receiver is marked “BURNSIDE PATENT / MARCH 25TH 1856” over the serial number, which is found again on the underside of the barrel next to two inspector marks of “P / A”, the top of the barrel is marked “CAST STEEL 186”. The rear sling swivel base is marked “B” as is the forend’s barrel band. The left of the frame has “H” inspection mark, we believe this is also on the left of the forend but the mark is faded. The top of the breech block’s serial number of 21254 does not match the receiver or barrel, same as with the underside of the butt plate, serialized “12673”, which was much earlier production. All parts would have ended up with the 6th Illinois Vol. Cavalry, according to our research.

Sights / Optics: The front sight is a triangular base that is dovetailed onto the barrel. The rear sight presents a “V” notch in the down position and when flipped up gives two “V” notched elevation sights for 300 and 500 yards, the base is set to the barrel by the breech.

Stock Configuration & Condition: The stocks are smooth walnut. The forend has a barrel band and has some deeper gouge and scrape marks. The butt stock has excellent fit to the metal but does not bear a cartouche inspection mark visible. The flanks have deep scrape losses and a gouge on the left of the wrist. The wood is generally dark and shows marks throughout. This said, the stocks are free of major damages. The LOP measures 13” from the front of the trigger to the back of the the metal butt plate; the plate does not have finish remaining and has spots of mild erosion, in Very Good condition. The stocks rate in about Very Good overall condition.

Type of Finish: The barrel is blue, the receiver and components may have been case colored.

Bore Condition: The bore is semi-bright and the rifling is highly defined. There are some spots of moderate depth erosion but in general, the bore looks very nice for its age. We were able to clean quite a bit of fowling out, further maintenance may improve it further.

Overall Condition: This rifle retains about 10% of its metal finish found only on protected surfaces, such as the underside of the forend and inside of the receiver. The other surfaces look to have been hand buffed at some point. The surfaces have hints at cleaned erosion and there is fresh erosion in dark brown to black variance, hinting the cleaning may have been done long ago. The receiver has some heavier wire wheel marks but the markings are strong on top, the other markings are clear unless otherwise noted. The left side screw head still has nice bluing, all slots are lightly tooled with a few exceptions of small chip losses. Overall, this rifle rates in about Very Good condition.

Box, Paperwork & Accessories: Page 141 of Springfield Research Service of U.S. Martial Arms shows rifles up to 14332 issued in 1865, however serial number 21819 was issued July 01, 1864 in a large serial number range that was issued to the 6th Illinois Volunteer Cavalry. A copy of this page is included.

Our Assessment: In August of 1864, the 6th Illinois Volunteer Cavalry met with General Forrest’s men at Hurricane Creek with their brand new Burnside carbines. The butt plate and breech block are not serialized to the rifle but according to our included paperwork, all items did actually go to the 6th Cavalry at some point in time, oddly enough, the lower serial number items were issued during 1865, just before the disbanding of the 6th. The rifle survives with a strong bore and crisp mechanics. These are known as the ‘Best carbines of the Civil War, made by the worst general of the Civil War, General Ambrose Everett Burnside, whose facial hair became a more positive trait than his aptitude for warfare. Regardless, this rifle evolved from a patent date in 1856 and is surely impressive in combat, enough so that 43 Union Cavalry units were equipped with them. Instead of a muzzle loaded process, these babies could reload in a few seconds, even on horseback. The evolution of cartridge firing breech loaded rifles never stopped even after the Civil War. This item must have seen some interesting times if it needed replacement parts that are all connected to the same regiment. This highly historic item will do great in any collection.