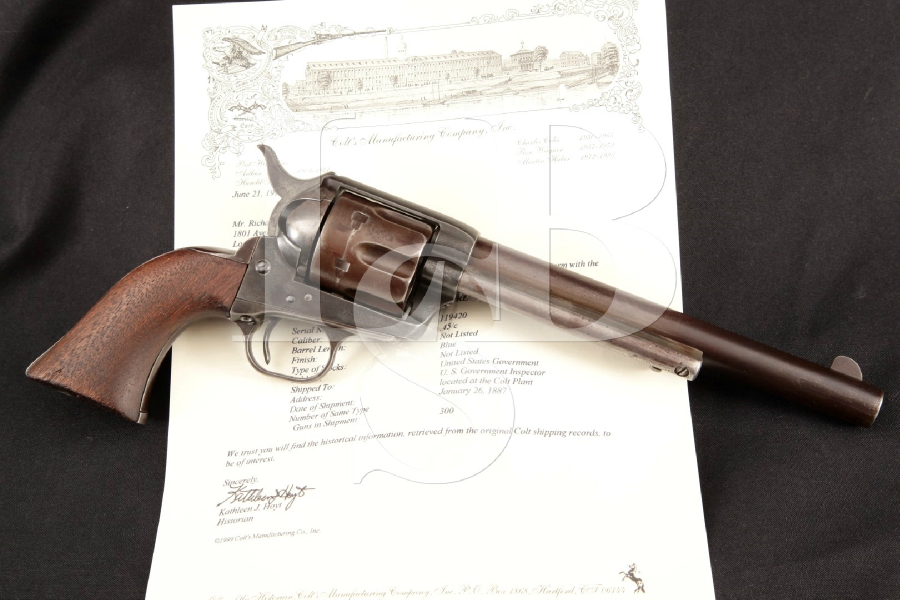 Markings: The top of the barrel is marked “COLT’S PT. F.A. MFG. CO. HARTFORD CT. U.S.A.”, the underside is marked “D.F.C.” (David F. Clark Inspector) and “P” (Sub-Inspector). The underside of the frame is marked with “D.F.C.” and the serial number, which is found again on the underside of the trigger guard plate and toe of the butt of the grip frame. The rear right of the frame is marked “G”, found again on the hammer cut, the back of the loading gate has assembly number “. The left of the walnut stock is marked “1887” over “J.G.B.” inspector mark, which does not have a border, observed in Kopec’s book on Colt Cavalry and Artillery Revolvers; this revolver falls in the serial number range for this inspection mark (page 81); the rear of the stock’s serial number is no longer legible, please see our pictures. The cylinder is marked “P / D.F.C.” and “19420”, also found on the barrel, under the ejector rod housing. The left of the frame is marked “PAT. SEPT. 19, 1871 / “JULY, 2-72. / ” JAN. 19-75″, next to “U.S.”

Stock Configuration & Condition: The grips are a one piece walnut stock that is marked “1887” with a serial number range correct inspector mark from John G. Butler on the left side. The inside of the left portion shows a repaired crack, with some very old brown wood filler on the top areas, please see our pictures. The butt has deep marks, most look to be nail heads, the lower edges have chip losses. The grips are in about Good condition as having had a repair at some point.

Overall Condition: This revolver retains about 0% of its metal finish. The surfaces have sifted to beautiful patina with areas of light to moderate erosion. The ejector rod, cylinder and loading gate have heavier wear, looking to be from holster use. The butt of the grip frame has a few marks that correspond with compression on the butt of the stock, the frame’s coloring has transitioned to mottled dark gray with erosion on the rear and lower areas, please see our pictures. The screw head slots range from light tomoderately tooled. The markings are faded on the top of the barrel, the rear of the stock’s number is no longer visible, the inspector and date stamp are faded on the left of the stock. Overall, this revolver rates in about Fair condition given its mechanics.

Mechanics: The cylinder has heavy play in full lockup of all 6 chambers. The hammer only sets into 3 of the 4 notches; the hammer does not sit flush with the frame when placed forward. We have not fired this handgun. As with all used firearms, a thorough cleaning may be necessary to meet your maintenance standards.

Our Assessment: From http://www.deviantart.com/morelikethis/322444596/digitalart/drawings/technical?view_mode=2#skins: “The Colt Single Action Army handgun is a single action revolver with a revolving cylinder holding six rounds. It was designed for the US government service revolver trials of 1873 by Colt’s Manufacturing Company and adopted as the standard military service revolver until 1892. Although the SAA has been offered in over 30 different calibers and various barrel lengths, its overall appearance has remained consistent since 1873. Colt has discontinued its production twice, but brought it back due to excessive demand.”. This revolver is a 1st Generation Single Action Army Cavalry configuration, with a 7 1/2″ barrel and is lettered to a U.S. Government order of 300 items in January 26, 1887; R.L. Wilson’s Book of Colt Firearms, page 249, indicates a total order of 2,000 revolvers and parts on November 4 of 1886, with a delivery in February and March of 1887, corresponding with this revolver’s documented shipment date. The action will need some work to operate correctly but in all, this is a beautiful revolver that should do great in your collection. There are dozens of variations of Colt SAA revolvers to collect between the three generations, blackpowder vs. smokeless frames, army marked vs. civilian, etc. making it almost impossible for the collector to obtain one of each, and making all of them desirable.