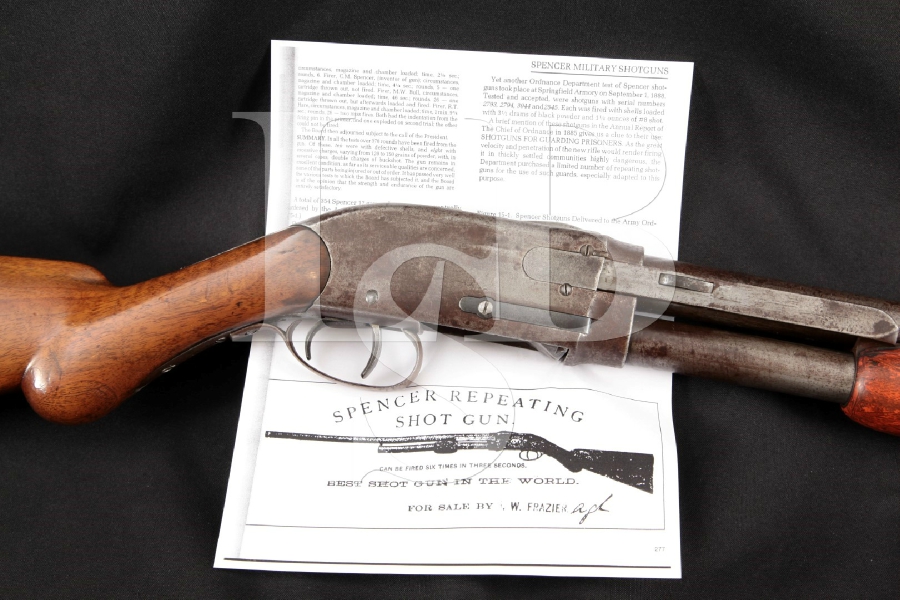 Serial Number: 1845 (Per page 277 of “Spencer Repeating Firearms” by Marcot, this shotgun was one of ten accepted by the U.S. Army Ordnance Department at the end of 1887.)

Barrel Length: The barrel is made from Damascus steel and is 24” in length.

Choke: The bore measures 0.735” at the muzzle, which is about Cylinder choke.

Sights / Optics: This shotgun is mounted with a small brass bead at the front of the barrel. There is a wide shallow “U” groove in the top of the receiver’s chamber ring for aiming.

Stock Configuration & Condition: The buttstock is fancy walnut that shows a fiddleback pattern in the belly, and has a smooth pistol grip with a round knob at its bottom. The forend is a checkered red hard rubber, and is about 3” in length. There is a checkered steel shotgun style buttplate on the butt. The buttstock shows several dings and light drag lines. The left side of the buttstock also has a bruise on the left side at the butt and a long dark deep drag line on the left side of the wrist. The right side of the buttstock has two deep bruises at the toe, a long drag line and an oval spot that looks as though the surface was repaired. The wood is slightly shy of the metal at the sides of the receiver and shows oil staining around the receiver. The forend shows a hairline crack running down both sides, its checkering is worn smooth, and there are a few light dings in its finish. The LOP measures 13 5/16” from the front of the rear trigger to the back of the buttplate, which has developed a dark plum colored patina. There is moderate wear in the checkering, which is worn smooth at the heel and toe. The buttplate is in about Very Good to condition. The stocks rate in about Very Good to Fine condition.

Type of Finish: The barrel is Damascus steel. The remainder of the gun appears to have been blued.

Bore Condition: The bore is gray with extremely light erosion the length of the bore.

Overall Condition: The shotgun retains about 5% of its original finish. All surfaces show a mottled dark plum colored patina, but the barrel still shows its Damascus pattern, which is very evident in the front half of the barrel. The barrel and magazine tube show only a few light handling marks, with several tiny dings in the right top of the barrel at the receiver. There is a gouge in the metal in front of the screw in the top front right corner of the receiver, several tiny dings on the edges at the top of the port opening, a drag line in the left side of the receiver and tiny spots of surface frosting scattered over the receiver. All of the surfaces are clean for such an old gun, without all the dings and bruises one associates with a rifle or shotgun that has seen service in the Army. Please see our pictures. The screw heads are mostly sharp, but show signs of a screwdriver. The markings are clear. Overall, this shotgun rates in about Very Good condition.

Mechanics: The action functions correctly in all respects. The shotgun is equipped with double triggers, but the front trigger is only used for cocking the rear trigger, not setting it. Normally, the rear trigger is cocked when the action is cycled. However, if the trigger is held down as the action is closed, the trigger will de-cock, allowing the shotgun to be carried with a round in the chamber, but with the trigger de-cocked. The rear trigger can then be cocked by pushing the front trigger forwards. We have not fired this shotgun. As with all used firearms, a thorough cleaning may be necessary to meet your maintenance standards.

Box, Paperwork & Accessories: A copy of page 277 from “Spencer Repeating Firearms” by Marcot is included which shows the serial number of this shotgun, 1845, as one of 10 Spencer shotguns tested and approved by the U. S. Army Ordnance Board in Dec. 1887.

Our Assessment: From http://www.guns.com/2013/02/12/5-of-the-most-innovative-shotguns-ever-made/ “Christopher Miner Spencer was a forward thinker. Best known for his Spencer Carbine, which gave Union Cavalry godlike firepower during the Civil War, he also invented a sewing machine, a horseless carriage and the first pump-action shotgun. In 1884, his Spencer Arms Company in Windsor, Connecticut, began manufacturing slide action sporting shotguns at a rate between five and ten per day. It fed 2 5/8-inch shells from an under barrel tubular magazine. The Spencer Repeating Shotgun (what else would it be called?) both fed and ejected through the top of the breech, kind of like an Ithaca or Browning of today but in reverse…”. In 1886, a new model was released, named the Model 1886, and one of these new models was submitted to the Army Ordnance Board for testing. It passed all tests and in April, a contract for 240 shotguns was received from the Ordnance Department. In Dec. 1887, another board met to test 10 recently delivered shotguns. This shotgun, serial number 1845, was one of the ten shotguns tested and approved by the board. Four more Model 1887 Spencer Shotguns were tested in 1888. A total of 354 Spencer shotguns were eventually ordered by the Ordnance Department for use as “Shotguns for Guarding Prisoners”. Production of the Spencer shotgun continued through 1889, but sales dwindled and in 1890, Francis Bannerman bought the tools and machinery mortgage from Pratt & Whitney and foreclosed on Spencer Arms. In lieu of payment, Bannerman receiver the patents and manufacturing rights for the Spencer Shotgun – neither Spencer, Roper nor Rhodes (the latter two who helped to develop the shotgun) received any royalty in the years that followed. By the mid 1890’s, Winchester and other others had their own versions of a pump action shotgun on the market and Bannerman ceased production in the early 1900’s. Today nobody remembers Chris Spencer, but in almost every shooter’s closet, there is at least one pump-action shotgun. This shotgun is in about Very Good condition with about 5% of its original finish remaining. The Damascus finish is still very evident in the barrel. The bore is gray with light erosion. This shotgun is a great find for collectors of American martial arms and of vintage shotguns in general. The Spencer was the first pump action shotgun in production, only about 3000 were made in total, and of these, 342 were purchased by the Army Ordnance Department. These statistics makes this shotgun rare, but being one of eleven known Model 1886 shotguns (the original plus the 10 in the secondary test) to have been tested and approved by the board makes it very rare indeed. This is a one- time opportunity to pick-up a very rare piece of history.