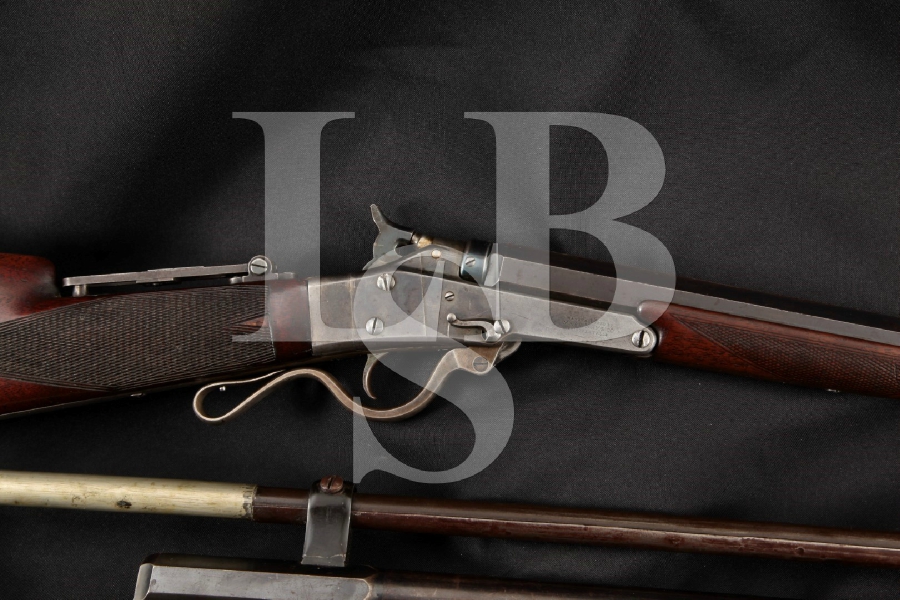 Make: This rifle was made by the Massachusetts Arms Co. under the Maynard patent.

Serial Number: The lower tang is marked with serial number “1040” but has a date of “1865”, which does not correspond with the date of 1873 on the receiver; we were unable to remove the barrel pivot screw in order to see what the receiver’s serial number is. The extra barrel has a matching serial number of 1040 on the underside.

Action Type: The rifle is a single shot rimfire with a Hadley conversion breech ring, with a lever operated tip-up barrel.

Barrel Length: The installed barrel is 28″ in length, part octagonal, part round. The extra barrel is 25 3/4″ long, the breech area is octagonal, the rest is round.

Sights / Optics: The front sight on the installed barrel is a ‘globe’ type cylindrical base with a thin post, dovetailed onto the barrel. There is a dovetail slot cut and filled with a metal tab on the rear of the barrel. The upper tang has a sliding aperture leaf in a flip up base; there are notch marks hand ground on the flanks of the ladder. The included barrel has a 30 3/4″ tubular optic, the last 6 3/4″ is nickel plated and appears to be an extension. A brass insert with three glass objectives slides out of the main tube, exposing an 1863 patent date marking. With the insert removed, one can see the front objective, which has fowling and light marks on the front, the inner objectives are foggy, the tube looks to have had a soldering touch up, the exterior of the scope tube has scrapes adn tarnish, the bare metal of the forward portion has rich patina and mild erosion. The scope is mounted with two dovetailed rings, the scope is in about Fair condition.

Stock Configuration & Condition: The original Maynard rifles were made with a buttstock only, this rifle is fit with a beautiful Schnabel tipped forend with wrap around checkering. The forend has been lightly sanded and re-varnished, looking to have been done long ago. There are some gouge and scrap marks present. The butt stock has a strait wrist that is flank checkered. The stock has decent fit to the metal but for at the toe of the nickel plated Schuetzen style butt plate. The stock itself has scattered compression marks and a few tiny chip losses around the tang. The LOP measures 12 5/8” from the front of the trigger to the back of the buttplate. The buttplate shows tarnish at the heel and toe, is developing a brown patina, and has spots of erosion in its center. The buttplate is in about Very Good condition. The stocks are in about Very Good condition.

Type of Finish: The barrels are blued. The receiver is case colored and the butt plate is nickel plated.

Finish Originality: The finishes on the rifle in its current configuration are original, the scope rings look to be refinished, showing grind marks under the finish.

Bore Condition: The installed bore is semi-bright with some spots of pitting and light pin prick erosion, scattered throughout the bore. The extra barrel’s bore is gray with worn rifling that is still defined. There is mild erosion throughout the bore.

Overall Condition: The installed barrel retains about 80% of its blue finish, with spots of light pitting and surface etching, found throughout; there is edge wear on the muzzle and edges of the octagonal portions, a few handling marks are found in the form of scratch and bruise marks, there is handling rub wear. The receiver, lever and other components have about 65% of their finishes. The Hadley conversion chamber ring has rich fire bluing. Strong case coloring is still found on areas of the receiver and lever, the other areas have spots of pin prick erosion, surface erosion and handling rub wear. The butt plate’s nickel finish is tarnished in areas with areas of erosion, please see our pictures. The extra barrel and scope retain about 45% of their finish, the bluing has transitioned to plum patina with semi-abrasive cleaning in areas; there is pin prick erosion and some spots of pitting. Most of the screw slots have moderate wear, a few have chip losses and the barrel pivot screw head slot is badly disfigured, we could not remove this item to check markings on the barrel and top of the receiver. The markings are clear but shallow unless otherwise noted. Overall, this rifle rates in about Good Plus to Very Good condition.

Mechanics: The installed barrel’s extractor does not move when the action is opened. The rifle is loaded by releasing the under lever, the barrel pivots tip down exposing the breach. When in full lockup, there is no movement in the components. The receiver has a center mounted hammer and Hadley conversion to rimfire, via a receiver mounted ring. We have not fired this rifle. As with all used firearms, a thorough cleaning may be necessary to meet your maintenance requirements.

Box, Paperwork & Accessories: The rifle comes .22 and .35 caliber barrels, the .22 barrel has a long optic with dovetailed rings, described above in Optics. The .22 caliber barrel has a correct lever assembly and extractor, which seem to function correctly.

Our Assessment: Maynard Patent Single Shot rifles were manufactured from 1863 to 1890. This Model 1873 has Hadley’s improvement, which incorporates a rimfire conversion, allowing use with both the .22 and .35 caliber barrels provided in this auction. With its beautiful fancy stocks and remaining finish, it is definitely a looker, as if the tip-forward, lever released barrel assembly was not enough to widen the eyes. We have seen some Maynards come through from the Civil War and post-war eras, this one is definitely up there in overall condition. This rifle should be a big hit with the collectors. Although quite a few were made, this is the first 1873 model we have seen in several years, so they can’t be that common. The original finish and tang sight are sure to add to its value.