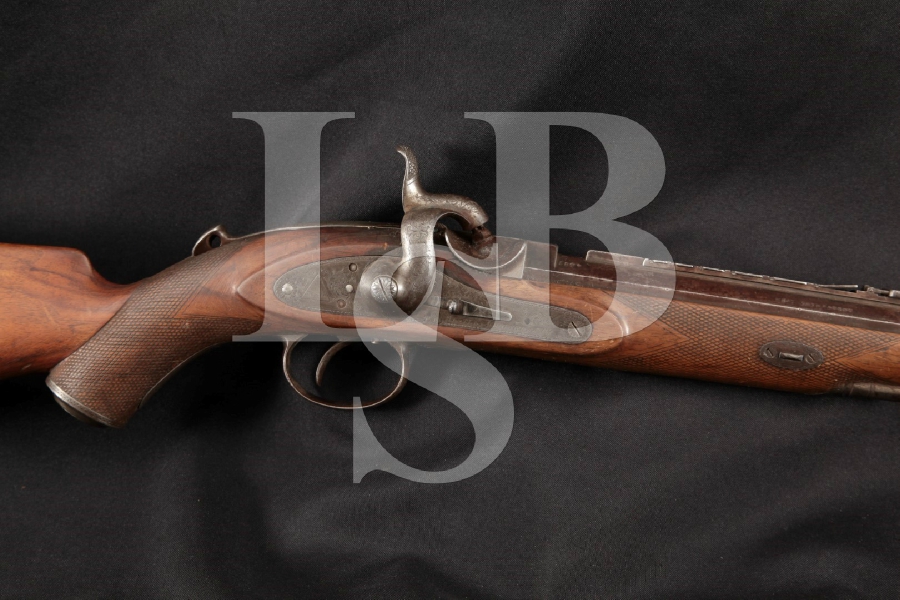 Sights / Optics: The front sight is a short bone blade held in a flat base which is dovetailed into a raised boss at the front of the barrel. There is a long rear sight base dovetailed into the top of the barrels top rib. A folding ladder sight and six folding leaf sights are installed on the single sight base. The leaf sights are all “V” notches and marked with yardages in their upper right rear corner. The markings on the rear three leafs are obscured by erosion, but the front three are marked “400”, “500” and “600”. The rear face of the ladder is marked from “1” to “6” on the left side and “7” through “16” on the right side. It is clear that the markings on the right are to be used with the “V” notched slider, but it is not clear how the markings on the left are to be used. Perhaps the ladder is used on other sight bases which have steps for use as an elevator. The top surface of the top rib is finely serrated to reduce glare.

Stock Configuration & Condition: The stock is one piece checkered walnut with a forend that extends to the front of the rear base. The forend has a wooden nose cap that is slightly different in color that the rest of the stock. The nosecap is grooved for a ramrod and there is a pipe inlet into the front underside of the forend. The buttstock has a pistol grip with a blued steel grip cap that is border engraved around its top edge, and scroll engraved on its bottom face. There is a German silver disc inlet into the left side of the buttstock that is engraved with “J. AvanZyl”. (“Van Zyl” is an Afrikaans toponymic surname that derives from the Dutch surname Van Zijl). There is an engraved steel patchbox on the right side of the stock at the butt, and the butt has a steel shotgun style buttplate. There is a sling swivel stud mounted in the belly and another at the bottom of the cleaning rod hanger fixed to the bottom of the barrel’s bottom rib. There is oil staining around the receiver, in the grooves of the checkering and in the old dings, drag lines and bruises scattered over the stock. There is a short crack from the top of the lockplate to the underside rear of the pan that surrounds the nipple. There is a gouge mark at the bottom edge of the disc on the left side of the buttstock, a deep ding on the front upper edge of the flat on the left side of the stock, with another ding and drag line at the lower front edge of the flat. There is a deep scratch in the checkering from the edge of the right escutcheon around the barrel wedge to the top edge of the forend. The checkering shows moderate to heavy wear. There are a few shallow bruises in the checkering of the pistol grip with a ding in the right side. There are several tiny dings and light bruises in the forend checkering with two deeper dings in the underside. The patchbox shows a few tiny dings and a few tiny spots of surface frosting. The disc on the left side of the buttstock shows several scratches. The LOP measures 14 3/16” from the front of the trigger to the back of the buttplate. The wood is shy of the metal at the toe, and there is a gap between the stock and the buttplate at the toe where the buttplate is bent slightly outwards. The buttplate shows thinning, light wear at the heel and toe, many tiny nicks, and several spots of solid erosion. The buttplate is in about Good condition. The stock rates in about Good condition.

Bore Condition: The bore is gray, tending to dark at the muzzle. There is light to moderate wear in the pronounced rifling. There is moderate erosion from the muzzle back about 1”.

Overall Condition: This rifle retains about 15% of its metal finish. There is a dark mottled patina forming over the barrel, with thinned bluing visible under the patina. There are several tiny dings in the left side of the barrel at the front sight, and a few more scratches and tiny dings along the left side between the muzzle and the forend. There are several nicks in the underside edges of the bottom rib and a few tiny nicks in the upper edges of the top rib. There are several spots of solid erosion along the length of the barrel and the rear faces of the leaf sights show tiny dings and spots of erosion. The lockplate shows surface loss and a few very light dings just in front of the hammer. The top of the receiver and the pan around the nipple show erosion. The knurling on the hammer shows light wear. The screw heads are mostly sharp, but several show marks of a screwdriver. The markings and engraving are clear except for the view and proof marks, which are too faint to read clearly. Overall, this rifle rates in about Very Good condition.

Mechanics: The action functions correctly. This rifle has a single set trigger that currently breaks crisply at about 10 lbs. There is a safety in front of the hammer that locks the hammer when at the half-cock position. The front half of the nipple is broken off. We have not fired this rifle. As with all used firearms, a thorough cleaning may be necessary to meet your maintenance standards.

Our Assessment: From https://www.theexplora.com/a-curious-twist-to-the-monkey-tails-tale/: Even after 1870 when the metallic cartridge breech loader was well established and proven, substantial numbers of Monkey Tails were still being manufactured and sold. Production continued into the 1880’s a date by which most other capping breechloaders had been consigned to the dustbin of history. The greatest demand came from the Boers in South Africa; for them it was an ideal and practical weapon, at the time even more practical than a metallic cartridge gun. Most of the Boers were poor farmers living in outlying districts; metallic cartridges could be hard to come by and expensive, yet most trading post would have a supply of powder, caps and lead. The Monkey Tail used a paper combustible cartridge with a felt wad in the base to seal the breech on firing: although these cartridges could be bought, many owners preferred to make their own with a few simple tools that could be supplied with the gun. A further advantage was that the gun could also be used as a muzzle loader when no ready-made ammunition was available, an ideal weapon for the hardy veldt Boers whose survival could depend on a reliable and practical rifle. It was to be this weapon that the Boers turned on the British in the first Boer War of 1881, and to great effect: the majority of the 500 Boers who defeated 647 British soldiers armed with the Martini Henry at Majuba carried the Monkey Tail. By European standards it was considered an obsolete weapon. The model favored by the Boers was a short rifle version with a 24” barrel, easy to handle on horseback, yet slightly longer than the standard cavalry carbine, allowing extra-long range accuracy. It is said that Boer boys learned to shoot at an early age and were not considered proficient until they could hit a hen’s egg at a 100 yds. with a Monkey Tail rifle.”. This rifle is in about Very Good condition with about 15% of its original finish remaining. The bore is gray, turning dark at the muzzle, with light to moderate wear in the pronounced rifling. There is moderate erosion in the bore from the muzzle back about 1”. This engraved sporting rifle is way too fancy and a little heavy to have been used in the Boer Wars, but from the disc on the left side of the buttstock, it is evident that this was probably used as a hunting rifle by a Dutch Boer in South Africa. The Monkey Tail rifles were reliable and practical. This is a very nice example of a fine hunting rifle of the period, and we think the collectors of British and Boer weaponry will be interested. Its looks are unique enough to make it appealing to collectors without even considering its historical significance.