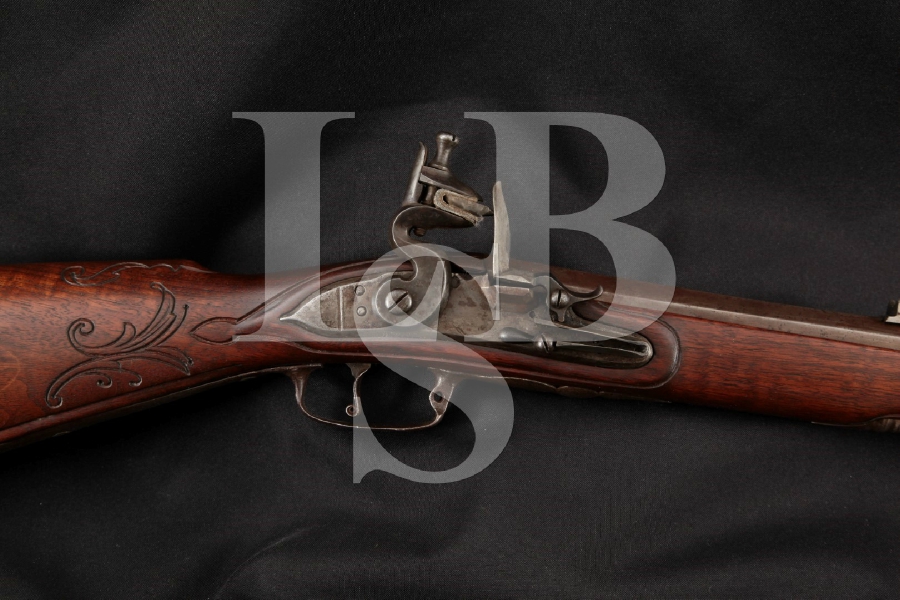 Make: The top of the barrel is marked with a faintly silver inlaid letter that may be a “W”, with “Buchel A. MehliSs”. There is an oddly shaped mark on the lock plate, please see our pictures.

Year of Manufacture: Jaeger rifles with bayonet mounts were made from about 1810 to 1820, and then produced as percussion items after this date range.

Markings: The top of the barrel is marked with a faintly silver inlaid letter that may be a “W”, with “Buchel A. MehliSs”. There is an oddly shaped mark on the lock plate, please see our pictures. The stock has beautiful border and floriated carving patterns.

Sights / Optics: The front sight is a low profile brass blade on a dovetailed base, near the muzzle and the rear sight is a “V” notched standing leaf with a flip-up “V” leaf for ranged shots, these items are on a beautifully formed metal base which is fixed to the barrel.

Stock Configuration & Condition: The stock is beautiful old world walnut with a sliding patch box door and wonderful hand carved accents. Some of the engraving seems to mimic foliage, common of Thurengia produced items as this area of Germany is known as its “Green Heart” with all of the natural growth and forestry. The stock has a solid construction and only shows a few compression, scrape and ding marks; there are a few tiny splinter losses around the metal items. The wood dips in before the metal components, the stock looks to be a later replacement but the wood still definitely hints of this replacement happening in the near past. The LOP measures 12 ¼” from the front of the trigger to the back of the metal butt plate; the plate has heavier erosion and does not show remaining finish, in about Good condition for its age. The stock rates in about Very Good Plus to Fine overall condition.

Type of Finish: We believe some of the lock components were blue, there are no other finishes left to be 100% sure what the other finishes were and may have been bare metal. The top of the barrel has what appears to be silver inlaid lettering.

Bore Condition: The bore is dark and the 6-groove rifling is still defined. There is erosion and pitting the length of the bore.

Overall Condition: This rifle retains about 1% of its metal finish seen as small amount of blue on some of the lock plate items. The balance of the finish shows wear to bare metal, showing a nice aged brown patina and some scattered pitting. Some of the pitting is dark and a tad deeper than the patina’d items. We’re happy to see this natural reduction in material, which is indicative of a very long life. We are not sure how the wood survived so well, in contract to the metal. The screw heads are generally sharp. The markings are faded on the barrel. Overall, this rifle rates in about Very Good condition.

Mechanics: The action functions correctly. The hammer still has a strong spring. We have not fired this rifle. As with all previously owned firearms, a thorough cleaning may be necessary to meet your maintenance standards.

Box, Paperwork & Accessories: Included is a vintage ram rod, we had difficulty removing the portion that is in the ram rod channel, we did not attempt to move remove it after a certain point so as not to damage it further; a disconnection portion of the rod is present, with a brass tip. The rod is in Poor to Fair condition.

Our Assessment: Jaeger rifles were made popular during the 7 Years War in the mid 1700’s; these items provided light weight, fast handling and devastatingly effective platforms that were used by the feared recon and skirmish troops. In 1810, the first Jaeger rifles were fit with bayonets and were phased out the following years after 1820 with the invention of the percussion cap. The stock is absolutely beautiful with floriated carvings and rich grain. The metal has natural patina and spots of erosion, telling us this item’s surfaces were never refinished or cleaned. If you’re in the market for a well made off-the-beaten-path flintlock in your collection, this one is bound to fit the bill.