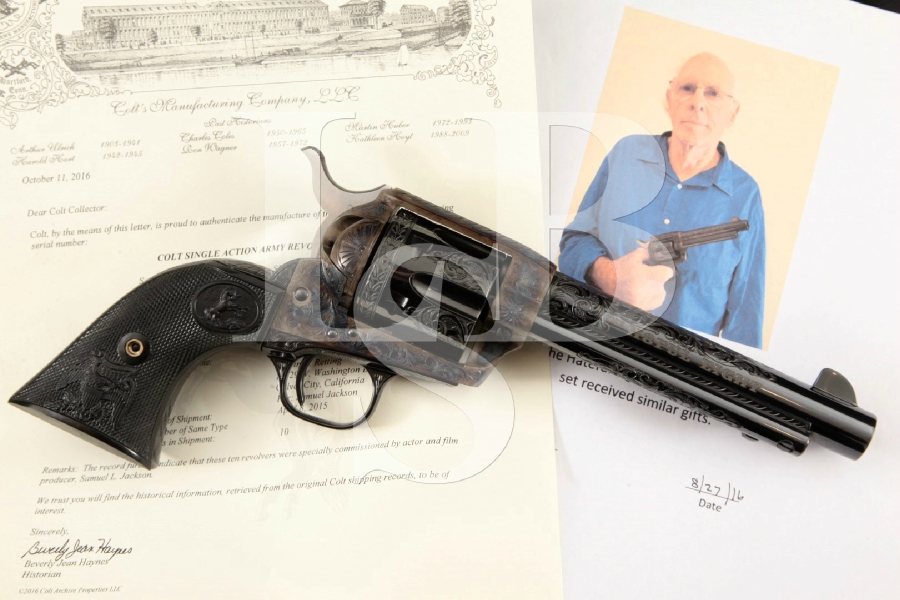 Markings: The left of the barrel is marked “COLT SINGLE ACTION ARMY .45”, the top is marked “COLT’S PT. F.A. MFG. CO. HARTFORD, CT. U.S.A.”, the right is engraved “THE H8FUL EIGHT”. The left of the frame is marked “PAT. SEPT. 19, 1871 / JULY 2, 72 JAN. 19,75”, the underside is marked with the serial number. The rear of the loading gate is marked “586”, which is found again scratched on the inside of the grip panels. The left of the frame straps bear the frame’s serial number. The metal surfaces have factory Class “C” scroll engraving, which is absolutely beautiful, please see our pictures of this astounding revolver. The grip panels have a rampant Colt in oval on the upper areas and an embossed American eagle on the lower flanks.

Sights / Optics: The front sight is a quarter round blade that is fixed to the barrel and the rear sight is a square notch before a “U” channel on top of the frame.

Stock Configuration & Condition: The stocks are factory (lettered and serialized to the revolver) black composition with eagle motif and rampant Colt in oval on the upper areas and an embossed American eagle on the lower flanks. The stocks are free from any notable marks or damages, looking to have seen minimal handling, please see our pictures. The grips rate in about Excellent overall condition.

Bore Condition: The bore is bright and the rifling is sharp, there is no evidence that this revolver has been fired outside of the factory, there isn’t even an established drag line on the cylinder. There is no erosion in the bore.

Overall Condition: This handgun retains about 99% of its metal finish. The cylinder has extremely light scuffing marks on the scalloped portions, just before the bolt cuts, however there is no evidence of this revolver ever having been fired outside of factory testing. Outside of a couple EXTREMELY small and faint marks on the barrel and frame, there are no damages or marks of demanding note; the marks are so small they are not noticeable until close inspection. The screw heads are sharp. The markings are crisp. Overall, this handgun rates in about Excellent Plus to Mint condition.

Mechanics: Given the revolver’s high condition, we did not function test it, however there is no evidence to suspect any operational issues, this revolver is pretty much new. We did not fire this handgun. As with all used firearms, a thorough cleaning may be necessary to meet your maintenance requirements.

The letter is in Excellent condition. Also included is three color copied print outs of Bruce Dern holding holding the revolver, the printout also reads “This factory engraved. 45 Colt Peacemaker (S/N: 73586A) was gifted to me on the set of “The Hateful Eight”. The other leading actors on the set received similar gifts.”, with his signature and date of 8/27/16 signed in ink on all 3 copies, these items are also in Excellent condition.

Our Assessment: Where to begin? Here we have a factory engraved Colt Single Action Army that is lettered to Samuel L. Jackson as part of a 10 gun shipment for the cast members of The Hateful Eight. The right of the barrel is engraved “THE H8FUL EIGHT”, the condition of this revolver is simply stunning and it is only about a year old! There is no evidence that the revolver was ever fired outside of the factory but we can’t verify this 100%, just looking at it, one automatically comes to the conclusion that it has been well taken care of with minimal handling. As if the revolver wasn’t cool enough to begin with, we have included three color copies of Bruce Dern, one of the recipients of this limited 10-gun shipment, who played General Sanford Smithers in the movie, holding the revolver with his ink signature and date on each copy. Also included is a Colt factory letter that fully backs all presented information about this item. Nothing is more beautiful than a brand new Single Action Army, the case coloring is simply brilliant, the fit and finish is unparalleled. A design that has been around since 1873 deserves some recognition. We can think of very few modern revolvers that can one up this baby. Please see our pictures and good luck.