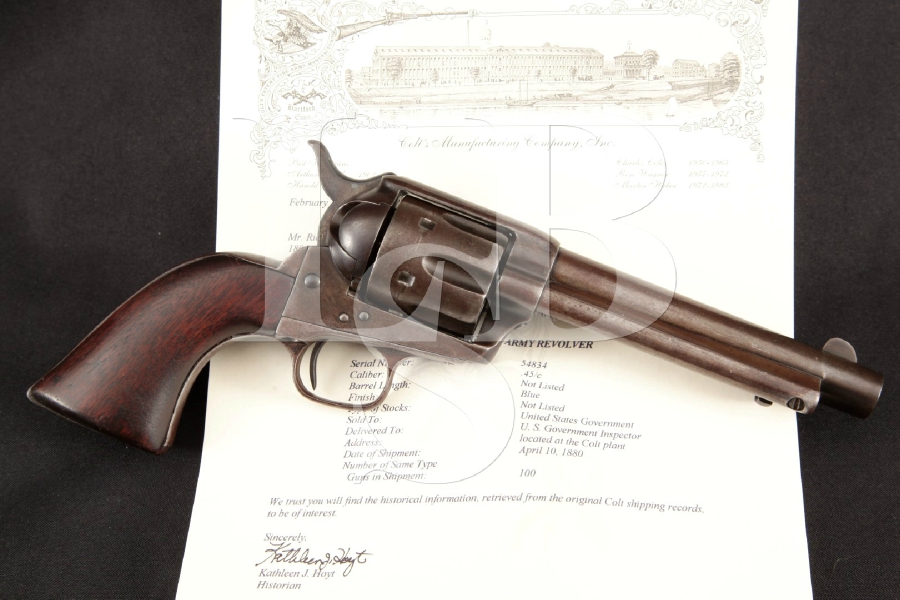 Stock Configuration & Condition: The grips are a one piece walnut stock that reflects the serial number on the back portion. The stock does not have any inspector marks, as it was sanded and re-varnished at some point, evident by the gaps in flush fit to the grip straps. The stock has heavy marks on the butt area, with lighter marks on the flanks. The grips are in about Good condition as having had a repair at some point.

Type of Finish: The revolver looks to have been nickel plated at some point, we believe this was done between 1895 and 1903, when Colt and Springfield Armory refurbished old stock, shortening the barrels to 5 1/2″, with a new finish; the original finish was blue, per the factory letter.

Finish Originality: Original as from refurbishment.

Bore Condition: The bore is dark and the narrow lands in the rifling are still defined. There is moderate to heavy erosion sprinkled throughout the bore with a few spots that cover both a groove and one of its adjacent lands.

Overall Condition: This revolver retains about 15% of its metal finish, seen as nickel finish mostly on small protected parts, especially the fore strap of the grip frame, under the grips and flanks of the hammer; there are spots of thinned nickel found scattered on the surfaces and screw heads. With the ejector rod housing removed, it appears the barrel was blue under the nickel finish, with some small spots of nickel, please see our pictures. The surfaces have mottled gray and dark brown patina with light to moderate depth erosion and handling marks. The grip frame straps have some deeper pitting and dark oxidation. The screw head slots range from moderate to heavily tooled, the screw is missing from the butt of the grip frame. The markings are faded. Overall, this revolver rates in about Fair condition.

Mechanics: The cylinder has notable side to side and fore to aft play, of about 1/16 to 1/18″ in full lockup. The hammer indexes in all 4 notches. We have not fired this handgun. As with all used firearms, a thorough cleaning may be necessary to meet your maintenance standards.

Our Assessment: From https://www.americanrifleman.org/articles/2014/3/12/colt-saa-artillery-model/ “U.S. military-purchased SAAs are among the most eagerly sought-after historic sidearms of the era, having been used from the Indian Wars into the early 20th century by the U.S. Army. They were originally issued with 7½” barrels in .45 Colt. Between 1895 and 1903, the government had nearly 17,000 of its SAAs reconditioned and rebuilt by the Springfield Armory and the Colt factory. Most of these guns had the barrels shortened to 5½”. Since most guns were reassembled without concern for part numbers, this is one of the few collectible gun variations that is considered “correct” with mixed serial numbers-meaning that the various parts of the gun will usually not match each other. These refurbished revolvers were issued to troops in the Spanish American War and Philippine Insurrection, and have been nicknamed “Artillery Models” by collectors, since a few of them were issued to Artillery units. The original long-barrel variations are distinguished by the “Cavalry Model” nickname and should generally have matching serial numbers. Both types will have “U.S.” stamped on the frame, along with inspector initials on various parts.”. This revolver is a 1st Generation Single Action Army “Artillery” configuration, with a 5 1/2″ barrel and is lettered to a U.S. Government order of 100 items on April 10, 1880, per the factory letter; R.L. Wilson’s Book of Colt Firearms, page 249, indicates a total order of 2,000 revolvers and parts on January 5, 1880, with 1,000 delivered on each date of March and May of 1880, corresponding with this revolver’s documented shipment date. The action will need some work to operate correctly but in all, this is a beautiful revolver that should do great in your collection, especially given its potential double use in the American-Indian and American-Spanish wars. There are dozens of variations of Colt SAA revolvers to collect between the three generations, blackpowder vs. smokeless frames, army marked vs. civilian, etc. making it almost impossible for the collector to obtain one of each, and making all of them desirable.