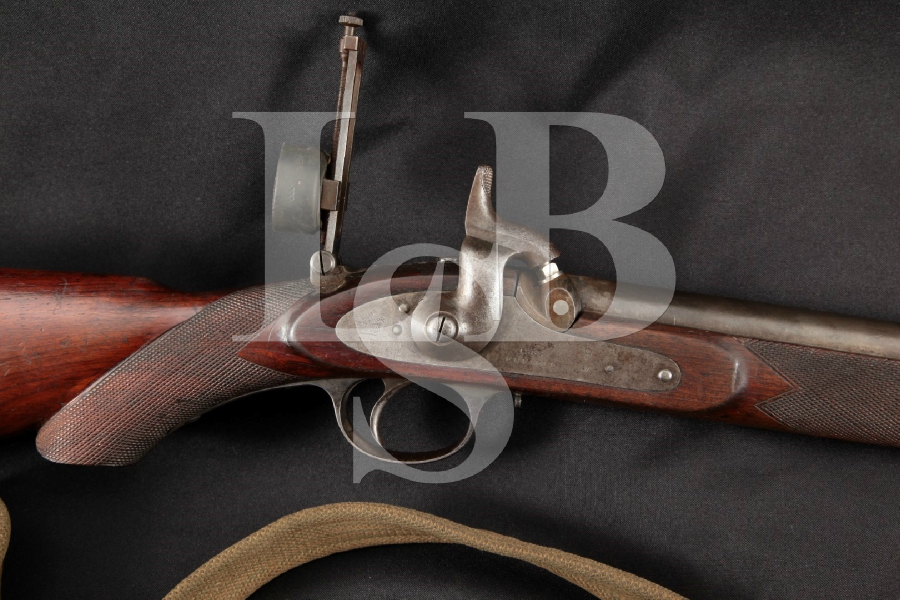 Make: The lock plate and assembly were made by Enfield, the barrel and configuration is that of Whitworth.

Model: Whitworth Match Rifle (Based on the 2-barrel band 1853 Enfield)

Sights / Optics: The front sight is a globe target profile tubular base that is fixed to the barrel, with a doughnut shaped sight insert; other inserts are not provided but the sight is designed to take multiple inserts, the inner diameter of the tube is 0.52″. The rear iron sight was removed, with evidence of one having been previously mounted on top of the barrel near the chamber. The upper tang has a separate extension, which is finely inlet to the wood with an adjustable flip-up vernier latter aperture sight system; the sight is unmarked and has a screw to adjust for elevation; the screw currently does not allow for any adjustment, we’ve soaked it in gunoil for a few hours and it will not move, but perhaps with some work it will function again. The latter is holding a 1.16″ diameter aperture disc with a black eye cup, please see our pictures of this excellent rifle.

Stock Configuration & Condition: The stock was completely customized, with checkering added to the forend, with nicely defined wrap-around wrist checkering. The barrel channel has a gray putty to bed the barrel, there are some cracks through this material. The ram rod hole was filled with a metal insert, there are sling swivels on the underside of the forend and belly, the right of the butt has a distributor and Enfield marking, a barrel wedge was added on the forend. After customization, the stock was professionally varnished, bringing out rich grain variation and tone. There are un-repaired cracks around the lock plate and forward of the forend swivel mount. The pistol grip is not a standard feature and was added to the stock, the lines of this addition are beautifully crafted and unless closely observed, one would not even notice this. The tang was crafted to fit the added pistol grip well. The top left of the stock has some thin cracks around the escutcheons by the tang areas, the area looks to have been repaired at some point. There are scuff and compression marks throughout, adding character and show as honest handling use, the stock still remains beautiful and instantly catches the eye, especially with the grain and tight fit to the metal. The LOP measures 13 3/8” from the front of the trigger to the back of the metal butt plate; the stock has minor shrinkage from age. The stock rates in about Very Good overall condition.

Type of Finish: The barrel, trigger guard, lock, lock plate and butt plate appear to have a blue finish; this is most obvious on the barrel and trigger guard, the upper tang has brilliant case coloring, perhaps a custom addition, as coloring is not observed on any of the other items.

Finish Originality: The finishes are original as a custom build.

Bore Condition: The bore is light gray and the Whitworth Hexagonal Match rifling is still highly defined and strong. There is extremely light surface erosion in the grooves, of shallow depth, in scattered spots.

Overall Condition: The rifle retains about 30% of its finish, seen as thinned bluing on the barrel and a bold case colored presence on the upper tang of the barrel’s recoil block; this item looks to be a later replacement of high quality; there are some wood losses by this item. The rear sight looks to have been removed during customization, with faint evidence of its base outlined. There are scattered hanling marks and scrapes, heavier marks are found by the hammer on the barrel, the hammer has pitting and brown patina, no finish remains on the lock plate, which has a dull mottled gray patina and mild erosion, the nipple looks to have been a later replacement. The butt plate and rear sight have patina, the plate’s surfaces have moderate erosion. The screw heads have mild tooling but are still highly serviceable. The markings are clear unless otherwise noted. Overall, this rifle rates in about Very Good Plus condition for its age.

Mechanics: The action functions correctly. The hammer still has a strong spring, the trigger pull is extremely short and smooth, breaking at about 2lbs! We have not fired this rifle. As with all previously owned firearms, a thorough cleaning may be necessary to meet your maintenance standards.

Box, Paperwork & Accessories: Included is a Whitworth patent rifled muzzle crown cap protector, which is rifled, matching that of the barrel and fits onto the muzzle with a twist-locking action much like bayonets of the day. The item has light patina with sharp lines, in Fine to Excellent condition. Also included is a green canvas sling, looking to be similar to those found on Lee Enfield rifles, the item is unmarked with brass fixtures, the brass has dark natural tarnish, the material of the sling is strong and there are no major damages outside of old rub wear, in about Fine condition.

Our Assessment: From http://www.americancivilwarstory.com/whitworth-rifle.html “The Whitworth rifle was, arguably, the first long-range sniper rifle in military history. This innovative rifle was designed by Sir Joseph Whitworth, a famed British engineer and inventor. In an effort to overcome the weaknesses of the British infantry rifle (the Pattern 1853 Enfield), Whitworth began working on his new design in 1854. Up to that time, a rifle barrel simply had a grooved surface that would actually slightly cut into the bullet to be able to grip the round and put spin on it. This friction naturally slowed the velocity of a shot fired from such a barrel. It was also known that tighter rifling (the Enfield’s rifling made one turn in seventy-eight inches) could produce greater accuracy; but at the same time, it increased friction, which caused the bullet to slow, which reduced range. Whitworth set out to design a rifle that would reduce friction while being rifled much more tightly than the Enfield. He believed this would produce a weapon that would be much more accurate, and would have a greater range. Man, was he ever right…” This is a completely custom build with an Enfield lock plate, a smooth 2 pound trigger, Whitworth rifled 34″ bored heavy target barrel and target sights. Whoever did the work on this rifle did so long ago, without makers marks it is difficult to determine when the modification took plate, but the plate and barrel have a matching date of 1863, the stock is marked for a T. Murcott distributor at 68 Haymarket in London, adding a bit of history. These rifles were so effective they were purchased by the Confederate Army during the American Civil War, with great effect. This rifle’s history must have some interesting stories and the bore is still strong, making it a wonderful find for collectors. One simply doesn’t see a custom build like this every day, especially with the added pistol grip, checkering and retained tight fit to the wood, shocking for its age. Please see our pictures and good luck.