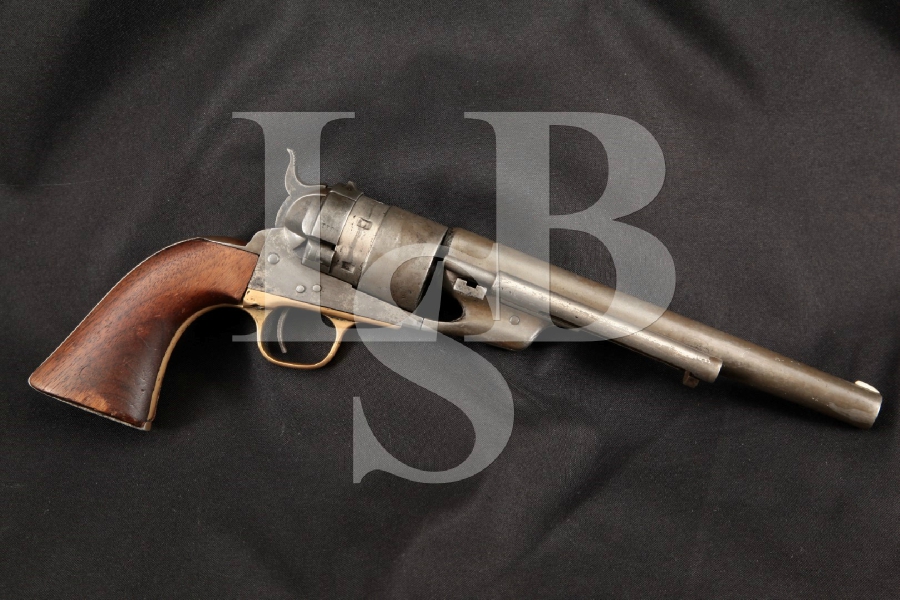 Serial Number: The underside of the trigger guard plate is marked “97659” over “512”, the other items are marked “511”, which is most likely the serial number after conversion.

Barrel Length: The barrel measures 7 5/8”, standard would have been 8”.

Sights / Optics: The front sight is a low profile blade, fixed to the barrel. The rear sight is a “V” notched rise on top of the converted firewall of the frame.

Stock Configuration & Condition: The grips are a one piece walnut stock with faded inspector marks on the lower flanks, the back portion does not have a legible serial number. The stock has an un-repaired crack on the left side of the butt, with scattered scrape and rub wear marks. The grain is still naturally presented and the stock does not look to have been refinished. The stock has play inside of the frame straps. The grips rate in about Fair overall condition.

Finish Originality: Given the lack of the barrel’s usual address markings and faded “US” mark, we believe the item has been refinished, this was probably done after the item was converted; since some of the other item’s serial numbers do not match, we believe this revolver was put together using pre-existing parts during the transitional period, most of which were refinished.

Bore Condition: The bore is dark and the rifling is muted by scabs of erosion and pitting.

Overall Condition: This handgun retains about 40% of its metal finish. The surfaces have heavy scuffing, the barrel retains almost no finish, the bare metal has a mottled gray patina, also seen on other areas of exposed metal, along with dark pitting and heavy marks. The brass grip trigger guard/ front strap has dark patina and heavier marks, the steel back strap has dark patina and erosion. The ejector rod housing still has strong nickel, with tool marks and scraping, the ejector rod head is not checkered, which would have been standard in this type of conversion. The barrel wedge does not go through the construction completely as photographed. The screw heads are disfigured. The markings are faded unless otherwise noted. Overall, this handgun rates in about Poor condition.

Mechanics: The cylinder moves by hand when in full lockup and there is heavy play fore to aft. The construction of the parts have light play. We did not fire this handgun. As with all used firearms, a thorough cleaning may be necessary to meet your maintenance requirements.

Our Assessment: From https://www.americanrifleman.org/articles/2014/4/18/colt-1860-army-richards-cartridge-conversion-revolver/ “The years immediately following the American Civil War presented an interesting dilemma for the Colt Patent Firearms Co. Its reliable percussion revolvers had been the most popular military sidearms during the conflict. Colt produced around 380,000 cap-and-ball revolvers during the war years. The introduction of metallic-cartridge revolvers by Colt and others was slowed by the fact that Smith & Wesson owned the Rollin White patent on a cylinder bored through end-to-end, which was a basic feature of most effective cartridge revolvers. Accordingly, S&W had more or less of a monopoly on the cartridge-revolver field through the 1850s and 1860s. When the patent expired, the field was open for Colt and others to enter the cartridge-revolver market. Colt had the tooling in place for production of its percussion revolvers, along with a stock of unused parts. There was also considerable interest in adapting percussion revolvers to fire the new metallic-cartridge ammunition. Colt developed a series of designs that could be used to convert an existing percussion gun to a cartridge revolver.” This example has some miss-matched parts, some of which look to have been refinished but by all means, has honest aging and handling wear; the revolver probably saw use in the American Indian Wars and probably has some interesting stories to tell. No Colt collection is complete without a Richards Conversion! Please see our pictures and good luck.