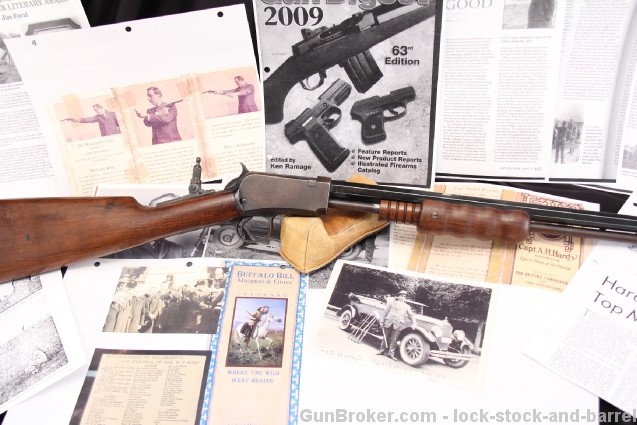 LSB#: 120321DP01
Make: Winchester
Model: 1890
Serial Number: 807934
Year of Manufacture: 1941 – I have Never Seen a Serial Number This Late
Caliber: 22 Short
Action Type: Pump / Slide Action Rifle
Markings: the left side of the barrel is marked “Stainless steel / Made In U.S.A. Winchester repeating Arms. Co. New Haven. / Conn. Pat. June 26. 88 Dec. 6. 92. Nov. 27. 06. May. 30. 1911. – Model 90 – 22 Short”. The Winchester proof is on top of the barrel and the frame. The lower tang is marked “807875”. The underside of the frame is marked “807934”. The numbers do not match.
Barrel Length: 24”
Sights / Optics: The gun is mounted with a dovetail set front beaded post and a pewter filled rear dovetail. There is a tang mounted peep sight, marked “king / Pat Dec3 1910 / Pat Pend.”. The eye piece is apparently missing an insert at the inside diameter is threaded.
Stock Configuration & Condition: The stocks are original condition and finish, varnished wood. There is surface marking throughout and evidence of handling, though no cracks or splits. Capt. Hardy added a larger pistol grip to the slide, which can prominently be seen in one of the accompanying photographs. The LOP measures about 12 ¾”. The stocks rate in about Very Good overall condition.
Type of Finish: Blue Frame, Black Stainless Barrel
Finish Originality: Factory Original
Bore Condition: The bore is bright and the rifling is sharp. There is erosion in the bore and just a hint of wear.
Overall Condition: This gun retains about 75% of its metal finish. The balance of the finish shows thinning and surface marking throughout the barrel, though the vast majority of its original finish is retained. The frame and tangs show more thinning, with a light patina in its place. There is scattered surface marking and handling wear, heaviest on the underside. The front end and the frame serial numbers do not match. We are told this is not extremely uncommon in the high serial number ranges. The Screw heads are sharp. The markings are crisp. Overall, this gun rates in about Very Good condition.
Mechanics: The action functions as designed, though we have not test fired it.
Box, Paperwork & Accessories: Accompanying this rifle are a total of 18 xerox copied pictures and articles of Captain Hardy. One of these copied pictures even shows this rifle leaning against an old car, with 4 other long guns. AGAIN, all images/pictures/brochures etc. are not originals and are copies.
Our Assessment: This gun is neat. The gun is about as late as you could hope to find for an 1890, and our consignor even tells us that it is the last one. This does explain why a stainless barrel (only made from 1925 – 1927) was installed on a 1941 gun and why the frame and barrel assembly are mismatched, yet both very late and very close together. This was probably assembled from parts left at the factory and shipped out at the end of production. A letter would be interesting on this one.

The gun on its own is interesting, but the association to a famous Exhibition Shooter is even more interesting. You can see this gun, nearly impossible to duplicate, in an old picture with Captain Hardy. A gun with this much curiosity could be explained by having gone to a famous exhibition and target shooter and though we believe the story 100%, could definitely be elaborated on with documentation. Check here for a story: https://www.lsbauctions.com/600/captain-a-h-hardys-winchester1890-exhibition-rifle-for-sale-at-lsb/