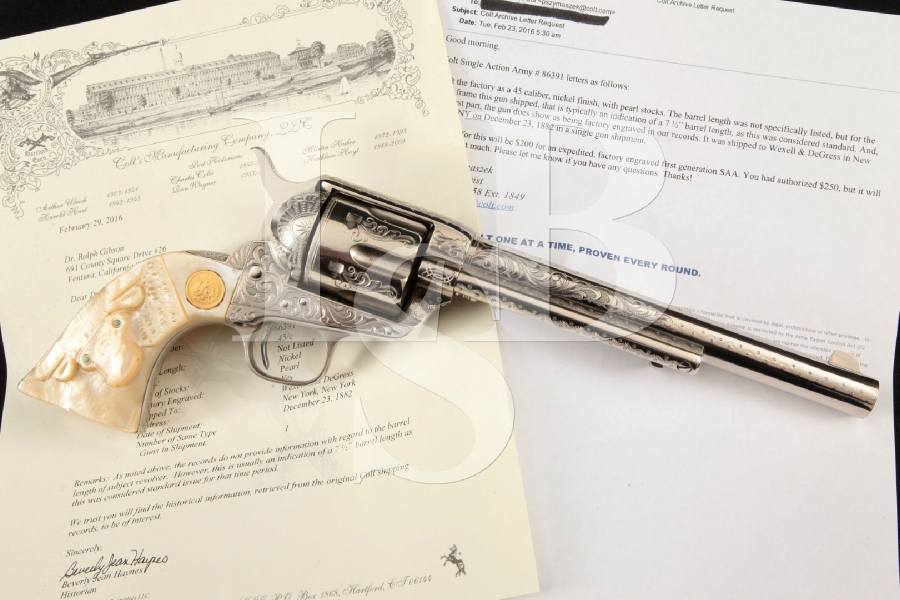 Markings: The top of the barrel is marked “COLT’S PT. F.A. MFG. CO HARTFORD CT. U.S.A.”, the underside of the frame, trigger guard plate and butt of the grip frame are marked with matching serial numbers. The underside of the trigger guard and rear right of the frame are marked “I.P.” The left side of the frame is marked “PAT. SEPT. 19, 1871 / JULY. 2, – 72 / JAN. 19 – 75”, the left side of the trigger guard bow is marked “45 CAL”. The rear of the loading gate is marked “4714”. The hammer cut is marked “H”, the rear of the cylinder is marked “P / I”. The surfaces have about 70% Nimschke-style; only 35% of Nimschke items were actually signed and there is no documentation on who did the work, but it is certainly of high quality craftsmanship and include elegant scroll, pebbled negative space, semi-floriated and dot-line engraving; please see our pictures of this outstanding revolver. The inside of the right grip panel is hand scratched “LENA”, the exterior has a high relief depiction of what appears to be a bull, even providing details of the nostril and mouth; the eyes look to have turquoise stones embedded. There is a mid 20th century Mexican coin that looks to have been added later that reads “ESTADOS UNIDOS MEXICANOS”.

Stock Configuration & Condition: The grips are real mother of pearl, the factory letter indicates that the revolver was originally shipped with pearl grips, these items have some darkening from age; the natural coloring of the material is nice. There are some extremely small losses on the back portion of the panels The right grip panel has a high relief bull bust with turquoise stone inserts, the name Lena on the inside and a mid-20th century Mexican coin. The stocks have but a few light scuffs; a few areas have natural imperfections but there are no visible cracks or major damages; the area where the coin is inserted has a little bit of variation to the fit to the item. The grips are in about Excellent condition.

Finish Originality: The revolver has been professionally restored.

Bore Condition: The bore is light to mid gray and the narrow lands in the rifling are well defined. There is extremely light erosion sprinkled throughout the bore. The chambers of the cylinder are mid gray with extremely light surface erosion, please see our pictures.

Overall Condition: This revolver retains about 98% of its current metal finish. The cylinder has an extremely faint scuff drag-line, which has not penetrated the finish. The inside of the right side cartridge cut, flanks of the trigger, back of the hammer and a few isolated areas on the cylinder have darkened spots of hardening patina. A light shift to milky tone can be observed on the cylinder and portions of the barrel. The inside track of the ejector rod housing has a compression from the rod. The interior of the frame and faces of the cylinder have some darkening. There are a few tiny spots of pitting found under the finish on the upper rear of the frame, there are small corner losses at the edges of the frame from refinishing, this being said, the job was done with professional attention to detail and the engraving was re-cut by hand, so as not to dampen the details when applying the current finish. We have seen many restored Colt Single Action Army revolvers come through the shop, this one is by far one of the best examples. The screw head slots are sharp with only a small amount of tooling evidence. The markings are crisp and the engraving is sharply defined. Overall, this revolver rates in about Fine Plus to Excellent condition as professionally restored.

Mechanics: The action functions properly. The cylinder produces about 1/32″ side to side play in full lockup of all 6 chambers with no measurable back play. The hammer has a strong mainspring and the trigger pull is crisp. We have not fired this pistol. As with all used firearms, a thorough cleaning may be necessary to meet your maintenance requirements.

Our Assessment: From https://en.wikipedia.org/wiki/Colt_Single_Action_Army “The power, accuracy and handling qualities of the Single Action Army (SAA) made it a popular sidearm from its inception, well into the 20th century. The association with the history of the American West remains to the present century, and these revolvers remain popular with shooters and collectors. George S. Patton, who began his career in the horse-cavalry, carried a custom-made SAA with ivory grips engraved with his initials and an eagle, which became his trademark. He used it during the Mexican Punitive Expedition of 1916 to kill two of Pancho Villa’s lieutenants, and carried it until his death in 1945 shortly after the end of World War II.[31]”
This Single Action Army shipped from Colt’s factory December 23, 1882 as a 1-gun order, sent to Wexell & DeGress in New York, New York (perhaps a Christmas gift?). If the engraving was not impressive enough, about 98% of the current nickel finish remains and the engraving is sharply defined. The bore has highly formed rifling lands and a very crisp action. The stocks are mother of pearl and though not mentioned as having any other features in the factory letter, give this revolver a unique look. The right grip panel has a high relief bull bust, with turquoise eye stone inserts, the name “LENA” is hand scratched on the inside. The deep relief right panel has a protruding bull snout that aids with grip for right handed shooters. The right grip has a mid-20th century Mexican coin, which adds complexity to the history; our consignor noted having received this piece in 1984 from a gentleman who said that it belonged to a Mexican general, though we do not have documentation on this claim. Included is a factory letter and other paperwork, making this an unbelievable find for Colt collectors! We have seen quite a few restored pistols come through the shop, this one is one of the best that we’ve seen, especially staying true to the engraving. There are dozens of variations of Colt SAA revolvers to collect between the three generations, blackpowder vs. smokeless frames, army marked vs. civilian, etc. making it almost impossible for the collector to obtain one of each, and making all of them desirable. This item should automatically attract attention from the most demanding of collectors. Please see our pictures and good luck.