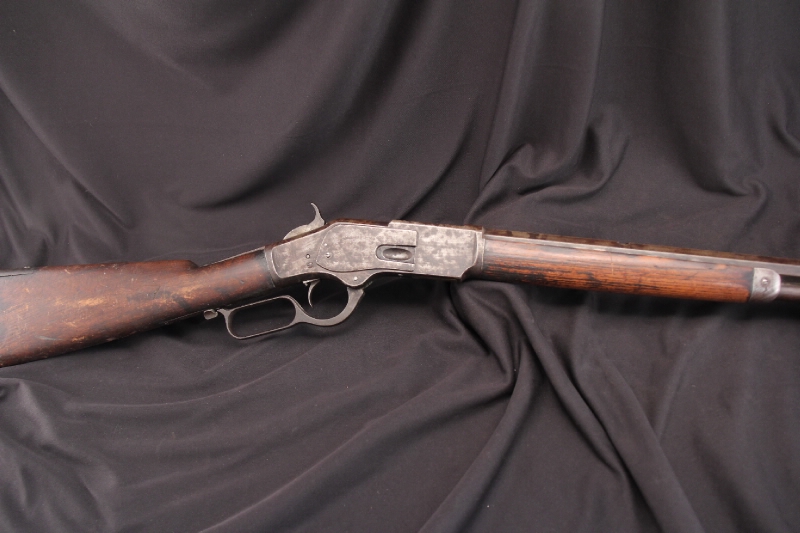 LSB#: 120312TT01
Make: Winchester
Model: 1873, Late First Model. This gun is outside of Flayderman’s range, but the gun does show the first model provisions for a dust cover and a hammer screw exposed on the frame. This gun does show a special order barrel length and set trigger.
Serial Number: 35177
Year of Manufacture: 1879
Caliber: .44-40 WCF (Winchester Center Fire)
Action Type: Lever Action Rifle , Tubular Magazine
Markings: The top of the barrel is marked “Winchester’s Repeating Arms New Haven Ct. / King’s Improvement – Patented – March 29 1866 October 16 1860”. The upper tang is marked “Model 1873” and the lower tang is marked “35177”.
Barrel Length: 30”
Sights / Optics: This rifle is mounted with empty front and rear dovetails and no iron sights.
Stock Configuration & Condition: The stocks are dark oil finished wood. The forearm looks like a very old replacement, or perhaps the original that has been partially cleaned. The stock looks original, though there are numerous dings marks and gouges. There is the beginning of a crack at the right wrist and behind the upper tang. The stock has darkened considerably from handling. The LOP measures 12 ¾”. The stocks rate in about Fair overall condition.
Type of Finish: Now Patina
Finish Originality: Looks Original
Bore Condition: The bore is bright in areas and the rifling is visible the entire length, and surprisingly strong. There is erosion and surface rust in the bore that may clean considerably. The surface rust is primarily on one side of the bore, as if some moisture settled while being stored horizontally.
Overall Condition: This rifle retains about 5% of its metal finish. The balance of the finish shows a mix of surface rust, patina and surface mottling. The majority of the metal surfaces show a light to moderate erosion. The Dust Cover and hardware are missing. The Screw heads are a bit worn, though serviceable. The hammer screw may be a replaced side plate screw? The markings are legible. Overall, this gun rates in about Poor – Fair condition.
Mechanics: The action functions correctly. The lever cocks the hammer, raises the elevator, places the bolt into battery and drops the carrier. The trigger releases the hammer. The action is worn, but apparently serviceable and complete without the dust cover. We did not fire this rifle .
Box, Paperwork & Accessories: None
Our Assessment: The Winchester 1873 is probably the most desired firearm ever produced. It could be compared to the Colt SAA and is truly one of the Guns that won the west and helped the American population earn its character on the frontier. The first Model ’73 is one of the most desirable ‘73s, and this one has a special order barrel length and set trigger. All features resemble the first model 1873, which is impossible to fake, but the serial number rang eis 4,000 guns after Flayderman’s says the first model production ceased. This one has as much interest as it does visual appeal, and you’ll be the only one around with a Winchester 1873 on the Mantle – FIRST MODEL!
CA Legal or CA Private Party Transferable: This antique rifle can be sold in California to anyone 18 years of age with valid ID. 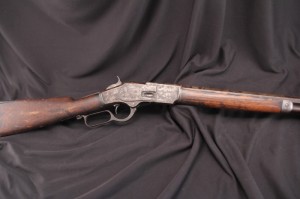