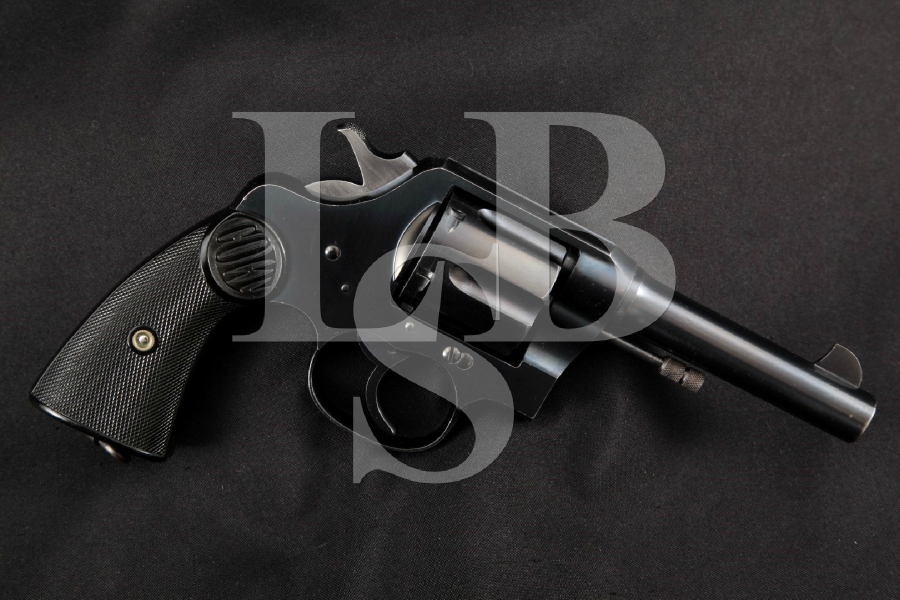 Stock Configuration & Condition: The grips are checkered black hard rubber with “COLT” marked in an oval at the tops of the grips. There is a small ding in the bottom edge of the left grip. The checkering shows light wear without mars. The grips rate in Fine to Excellent overall condition.

Type of Finish: This revolver has a bright blued finish.

Overall Condition: This handgun retains about 93% of its metal finish. There is thinning at the bottom of the front strap, on the backstrap, on the front edges of the barrel and frame, and on the edges of the cylinder. There are few tiny spots of surface frosting and numerous tiny handling marks scattered over the backstrap. There are a few light marks at the right front of the barrel and a small shallow ding at the right rear. There are a few dings in the left side of the frame between the cylinder and the top of the hammer, a drag line in the sideplate and a tiny ding in the center of the right side of the frame. There are also a few light handling marks in the right side of the frame, trigger guard, front strap and cylinder. The cylinder has a very light drag line. There is light wear in the hammer and cylinder latch knurling, and the ejector rod knurling is sharp. The screw heads are sharp and the markings are clear. Overall, this handgun rates in about Fine Plus condition.

Mechanics: The action functions correctly. The cylinder lockup is SOLID on all 6 chambers. The single action trigger pull is crisp. We did not fire this handgun.

Box, Paperwork & Accessories: None. Our consignor informs us that this revolver was shipped to W. H. Hoegee Co. of Los Angeles, California on July 29,1922, and was the only gun in the shipment. He lost the original Colt letter but retained this important information. The W.H. Hoegee Co. started in 1901 and occupied 138-142 South Main St. They sold sporting goods of every description and manufactured tents, awnings, sails, tarpaulin banners and hunting clothing. They also had their own in-house gunsmith for repairs and manufacturing of fine rifle and pistol barrels.

Our Assessment: The Colt New Service revolver was first built in 1898 and was a large frame revolver first chambered for .45 Colt. It was adopted by the U.S. Army as the Model 1909 after they found that the Colt New DA Army (Models of 1892-1901), chambered in .38 Colt, proved inadequate in stopping charging tribesmen during the Philippine-American War. Later, the New Service Model of 1917 was adopted to supplement inadequate stocks of M1911 pistols during WWI. This revolver is a commercial New Service model revolver with a 4 ½” barrel made in 1922. It was shipped to the W. H. Hoegee Co. of Los Angeles Ca., a large retailer of sporting goods equipment and manufacturer of hunting clothes. The revolver is chambered in .45 Colt. It is in about Fine Plus condition with about 95% of its original finish remaining. The bore is bright with sharp rifling and the cylinder lockup is solid. This revolver is in outstanding condition for a revolver over 90 years old. We often don’t see cylinder lockups this good on revolvers that are new in the box, let alone on those of this vintage. This revolver is sure to get the attention of the Colt collectors out there, especially those with an interest in commercial Colts shipped to California.