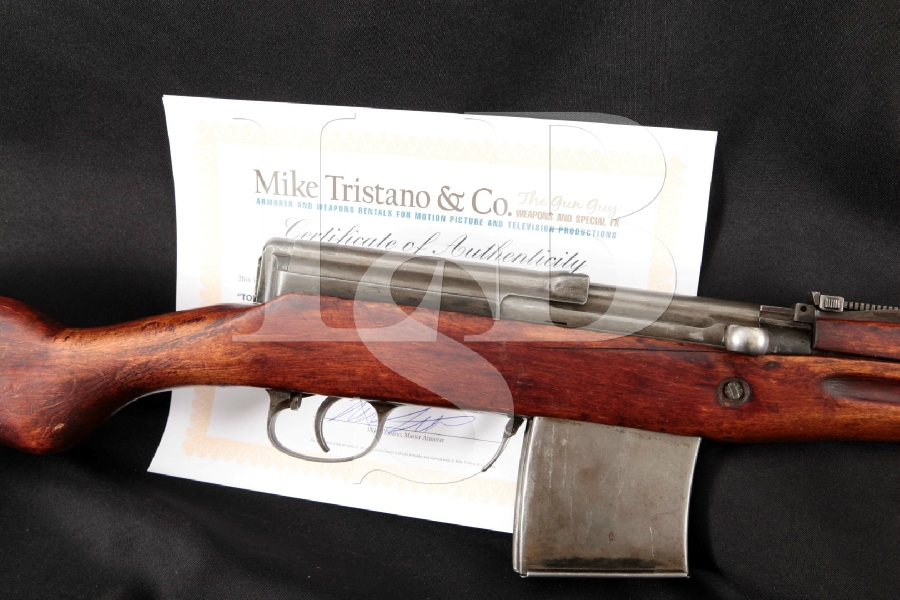 Barrel Length: Approximately 26 3/4 inches to the end of the muzzle break.

Sights / Optics: The front sight is a hooded post. The rear sight is a “U” notch blade assembly attached to a sliding elevator that is marked from “1 – 15”.

Stock Configuration & Condition: The two piece hardwood stock has a pistol grip, finger grooves, ventilated metal nose caps with sling point, sling loop under the butt, through bolt and a metal buttplate. The rear of the handguard has been repaired. It has been pinned and shows filled (glued) cracks. The top left of the forearm is missing some edge wood. The right side shows a long crack that extends to the edge of the wood under the receiver. The wood shows several other scrapes, scratches and compression marks. Many are deep and have removed the surface of the wood. Most of these marks have been finished over. There are a few small marks that have removed the new finish. The buttplate shows several small scratches and pin prick surface erosion. The LOP measures 13 inches from the front of the trigger to the back of the butt plate. The stock rates in about Good to Very Good overall condition, as refinished & repaired.

Bore Condition: The lands are semi bright and the grooves are dark. The rifling is deep. There is erosion and some pitting in the grooves near the muzzle.

Overall Condition: This rifle has lost much of its finish. The metal shows scrapes, small scratches, areas of pin prick surface erosion and discoloration from oxidation. The screw heads are intact. The markings are deep. Overall, this rifle rates in about Good to Very Good condition.

Box, Paperwork& Accessories: The rifle comes with two (one for your records and one to hang on the wall) signed Certificates of Authenticity from Mike Tristan & Co. / The Gun Guy Weapons and Special Effects. They provide weapons for television and motion pictures (http://moviegunguy.com/). The certificate states the following: “This is to certify that this TOKAREV SVT-40, serial #SA B5609, was featured on the History Channel TV series “TOP SHOT Season 1, First Challenge.” The certificates are in Excellent condition.
The original serial number for the rifle begins with a Russian character. This Russian character is not used by FFL holders for the serial number. It is common for importers to remark Russian weapons with 2 new letters above the Russian character and serial number. In this case the “SA” mark above the serial number is actually the Finnish property mark and not part of the serial number. The serial number we use drops the Russian character and only uses “B5609”.
The rifle also comes with one 10 round magazine. It has lost much of its finish. The metal shows scratches, areas of pin prick surface erosion and some discoloration from oxidation. The magazine is in about Good to Very Good condition.

Our Assessment: This Russian SVT 40 was made back in 1941. The rifle still looks darn impressive for a 75 year old service rifle. This one is not import marked. The rifle and magazine are each marked with the boxed “SA” Finish Army ownership mark, so this rifle was probably used to kill lots of Russians during the Continuation War, 1941 – 1944.
This rifle was featured on Season 1 Episode 1 of the History Channel’s Top Shot television show. The rifle was used during the very first challenge the contestants were involved in. The rifle comes with a Certificate of Authenticity from Mike Tristan & Co. / The Gun Guy Weapons and Special Effects. They provide weapons for television and motion pictures. To watch season 1 Episode 1 of Top Shot, go to http://www.history.com/shows/top-shot/season-1/episode-1. The shooting start about 5 minutes into the show. To see more on Mike Tristano & Co. go to the company web site at http://moviegunguy.com/.
Here is a chance to own a piece of firearms history. The rifle was made during WWII by the Russians and was probably used to kill Nazis. Later it was captured by the Finnish Army during the Continuation War and was probably used to kill Russians. It was eventually imported to the United States where it was made a part of television history on the appropriately named History Channel.
Here are some basics from Wikipedia: “The Samozaryadnaya Vintovka Tokareva, Obrazets 1940 goda “Tokarev Self-loading Rifle, Model of 1940”, or SVT-40 is a Soviet semi-automatic battle rifle. The SVT-40 saw widespread service during and after World War II. Intended to be the new service rifle of the Soviet Red Army, production was disrupted by the German invasion in 1941 resulting in a change back to the older Mosin–Nagant bolt-action rifle for the duration of WWII. After the war new rifles were adopted by the Soviet Union, such as the SKS and the AK-47…The first country outside the Soviet Union to employ the SVT was Finland, which captured some 4,000 SVT-38s during the Winter War, and over 15,000 SVTs during the Continuation War. The SVT saw extensive use in Finnish hands. Germany and other Axis countries captured hundreds of thousands of SVTs from the Eastern Front (World War II). As the Germans were short of self-loading rifles themselves, the SVT (designated as G.259(r) by the Wehrmacht) saw widespread use in German hands against their former owners. The Germans issued their own operating manual for the SVT. Study of the SVT’s gas-operated action also aided in the development of the German Gewehr 43 rifle.”