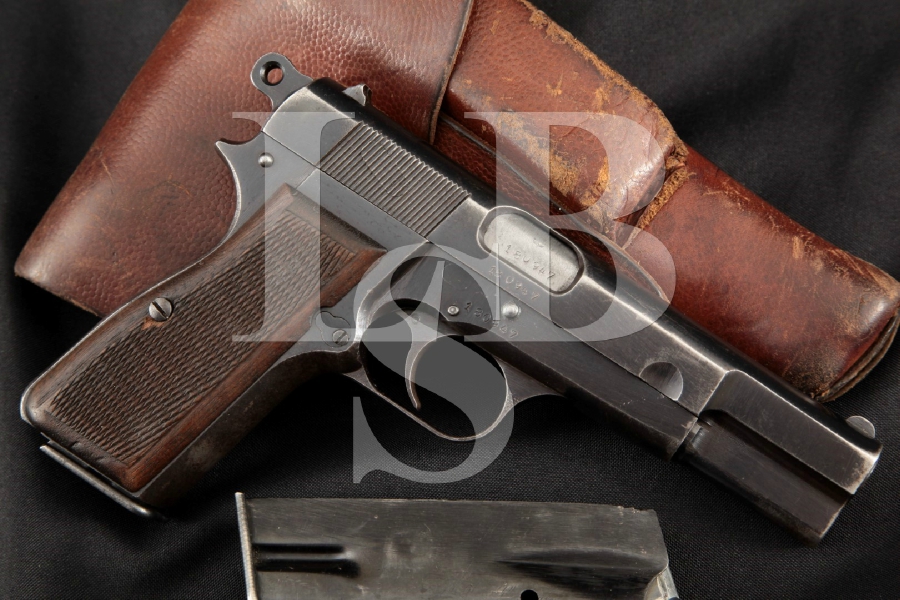 Sights / Optics: This pistol is mounted with a flat topped “V” notched rear sight dovetailed into the slide. The front sight is a rounded blade fixed to the top of the slide.

Stock Configuration & Condition: The grips are checkered walnut panels that show light oil staining, three shallow dings in the bottom of the right grip, light wear in the checkering of the left grip and moderate wear in the checkering of the right grip. Although it is the same length as the left grip screw, the head of the right grip screw sticks out past the surface of the grip – we think the hole in the grip frame was not drilled/tapped deep enough, which has been observed with other WWII production Hi-Power pistols. The wood around the screw is also disfigured. The grips rate in about Very Good overall condition.

Finish Originality: The finish is original. There are scratches under the finish, typical of wartime finishes, but the serial numbers on the slide and frame are very sharp.

Bore Condition: The bore is light gray with faint wear in the rifling. There is shallow erosion the length of the bore.

Overall Condition: This pistol retains about 68% of its metal finish. There is surface loss on the edges of the slide and the front edges of the frame, with thinning in the backstrap, front strap and the edges of the frame. There is a dusting of pinprick surface erosion at the left front of the slide and along its upper left shoulder, with tiny spots of surface erosion sprinkled over the sides of the frame, front strap and backstrap. There are two drag lines along the left side of the slide with scratches above and below the slide release. There are also tiny dings in the right side of the frame above the trigger. The slide serrations show light wear and the rest of the serrations and checkers are sharp. The left grip screw shows marks of a screwdriver and while the right grip screw is sharp, it sticks out beyond the surface of the grip. The serial numbers are sharp with raised edges, but the Waffenamt on the left side of the slide is shallow. The rest of the markings are clear. Overall, this pistol rates in about Very Good condition.

Mechanics: The action functions correctly. The pistol has a magazine disconnect as well has a frame mounted manual safety. The slide is tight to the frame; this pistol features a simplified method of takedown, which was Browning’s improvement over that of the 1911, making maintenance an easier task. We have not fired this pistol. As with all used firearms, a thorough cleaning may be necessary to meet your maintenance standards.

Box, Paperwork & Accessories: This pistol comes with two 13 round magazines with aluminum followers and a brown leather flap holster. The magazine in the pistol has been wire-wheeled over its body and then refinished. A faint “WaA140” Waffenamt and “U” are visible on its rear face. The magazine shows thinning on its edges and tiny spots of solid erosion sprinkled over its surface. The magazine is in about Good condition. The spare magazine has had its back half and its floorplate wire-wheeled. There is a faint “J” on its rear face. The magazine shows handling marks and light scratches in its finish. The magazine is in about Good condition. The high capacity magazines will not be provided to a California resident or to a resident of any state with magazine capacity restrictions. The holster is marked “jkh / 42” on its back surface, indicating it was made by Carl Busse of Mainz, Germany in 1942. The name “FRANCIS V. CAREY” is lightly scratched on the top fold of the flap portion, this looks to have been done a long time ago and may be the name of the soldier who captured the holster? The leather of the holster has a pebbled finish. The front of the holster is folded over and sewn to the rear edge to form the body of the holster. There is a magazine pouch sewn to the outside of the holster and the back of the holster was folded over to form the top flap. The flap has a steel stud riveted to it for securing to a strap sewn a 2nd flap, sewn to the back of the holster and folded over its rear edge to cover the trigger guard of the pistol. There is a single belt loop sewn to the back side of the holster with a hole crudely cut into it near its top. The stitching is intact but the bottom of the belt loop has been re-sewn. The pebbled surface is worn smooth over about 35% of the holster’s surface. The magazine pouch shows wear through the finish on its edges and a small tear in the leather. The holster is in about Good to Very Good overall condition.

Our Assessment: The Browning High Power pistol s based on a design by American firearms inventor John Browning, and completed by Dieudonné Saive at Fabrique Nationale. Browning died in 1926, several years before the design was finalized. The Hi-Power is one of the most widely used military pistols in history, having been used by the armed forces of over 50 countries. The Hi Power name didn’t refer to the cartridge, but to its 13 round magazine, holding five more than the Luger and six more than the Colt 1911. Its high magazine capacity and ergonomic grip frame have made it a favorite among civilian shooters as a carry pistol and for home defense. The High Power was adopted by the Belgian military and the early pistols were equipped with a tangent rear sight and a grip that was slotted for a wooden stock. When Germany invaded Belgium, they took over the FN plant and continued making the High Power, but soon dropped the tangent rear sight and the grooved grip after stocks of pre-invasion parts were used-up. In addition to guns made with and without tangent sights as well as with and without slotted grip frames, the Germans also used at least three different Waffenamt codes for the pistol creating several different variants for later collectors.
This pistol was made in 1942 before the serial numbers were changed from 6 digits to 5 with a suffix. It is in about Very Good condition with 68% of its original finish remaining. The bore still has pronounced rifling, the slide fits tight to the frame and the action functions correctly. The pistol comes with a brown leather top flap holster made by Carl Busse of Mainz, Germany in 1942 and with two old style magazines with aluminum followers. One of the magazines still has a partial Waffenamt on its rear face.
The holster has the name “Francis V. Carey” faintly scratched on top of the flap; we don’t have documentation confirming whether this was the soldier who acquired the item during the war but the mark is old enough to have been made around said era. The pistol is correctly marked with serial numbers on the slide, frame and barrel matching. This pistol will certainly be of interest to the Browning or FN collector, as well as those interested in WWII German weapons.